The Tibetan Election Commission of the Central Tibetan Administration has confirmed that the procedure set for the preparation of the next general elections of 2021 is underway, according to a statement by Wangdu Tsering Pesur, chief electoral commissioner. [1]

Wangdu Tsering has indicated that the worsening COVID-19 pandemic could cause problems, but hopes for an improvement. [1]

Regarding independent or NGO-based candidacy announcement, Wangdu Tsering Pesur recalled the Election Commission (EC) guidelines: “We have been very clear in the guidelines about candidature announcements, in that only EC declares the names of the candidates contesting elections. Even though there have been some announcements through social media on the basis of support and strength of certain individuals, we urge the community to adhere to the EC guidelines as has been done up until now.". [1]

The term of the current cabinet headed by Dr. Lobsang Sangay, who has served for two consecutive terms, will end with his retirement as Sikyong [2] in May 2021.

The first Tibetans to publicly announced their proposed candidacy for the highest office in Tibetan politics "Sikyong" are former minister Dolma Gyari; former minister, representative of Dalai Lama in the America and acting president of the Tibet Fund - Lobsang Nyandak; [3] and member of parliament Acharya Yeshi Phuntsok. [1]

Throughout 2020, a civil society initiative called Smartvote Tibet invited Tibetans to submit questions for Sikyong and MP candidates in order to build an informed electorate. Smartvote Tibet is an initiative formed by a group of Tibetans who have a background in political science, history, psychology, technology and human rights law. Once the public submit questions on a wide range of current issues, the candidates answer them. Then, voters can answer the same set of questions after which they receive a list of candidates that best match their preferences.

The platform is an adapted version of smartvote, which was first developed in 2003 by Politools in Switzerland. The tool has been successfully implemented for regional and national elections in Switzerland, Australia, Luxembourg, Austria, Scotland as well as in the European Union.

The primary election of Sikyong and MPs is announced for January 3, 2021, with the results set to finalize by February 8. [7] Hundreds of voters, most wearing facemasks, using hand sanitzer, and maintaining social distance, voted in Dharamshala, India. [8]

Following the initial primary, the two Sikyong candidates receiving the highest vote share move on the second round. The date for the second round is set for April 11. [9] [10]

Tibetan Music Awards were founded in 2003 by Lobsang Wangyal and are held every two years in Dharamshala, in northern India. Winners are chosen through online voting. 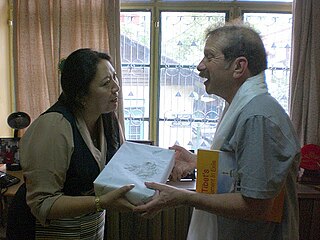 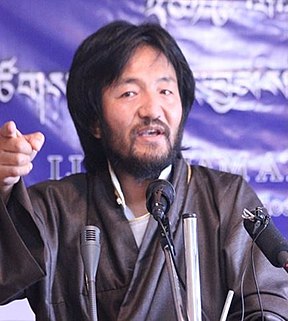 Kelsang Dorjee (Kaydor) Aukatsang (Tibetan: སྐལ་བཟང་རྡོ་རྗེ་ དབུ་དཀར་ཚང་ is a Tibetan politician and candidate for the Central Tibetan Administration office of Sikyong. Kaydor was a close aide of the current Sikyong, Dr. Lobsang Sangay, under whom he held various official positions including, the role of North America representative for His Holiness the Dalai Lama, Chief Resilience Officer of the Central Tibetan Administration and the Director of the Social and Resource Development Fund.