On 16 February 2021, A bus carrying about 62 people, driving from Sidhi to Satna, crashed into a canal, located near the city of Satna. It fell into the canal after the driver lost control over it. [1] At least 51 [2] people died in the accident, either from the initial crash, or from drowning [3] and seven were rescued after the bus fell near Patna village in Sidhi district of Madhya Pradesh, India.

Madhya Pradesh is a state in central India. Its capital is Bhopal, and the largest city is Indore, with Ujjain, Jabalpur, Gwalior, Satna being the other major cities. Madhya Pradesh is the second largest Indian state by area and the fifth largest state by population with over 72 million residents. It borders the states of Uttar Pradesh to the northeast, Chhattisgarh to the southeast, Maharashtra to the south, Gujarat to the west, and Rajasthan to the northwest. 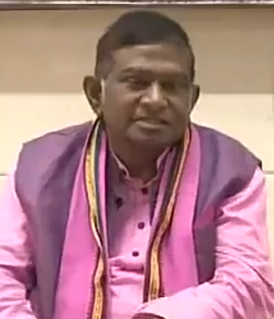 Ajit Pramod Kumar Jogi was an Indian politician, who served as the first chief minister of the state of Chhattisgarh, India. He was a member of the Janta Congress Chhattisgarh political party.

Bagelkhand or Baghelkhand is a region and also a mountain range in central India that covers the northeastern regions of Madhya Pradesh and a small area of southeastern Uttar Pradesh.

Rewa District is a district of the Madhya Pradesh state in central India. The city of Rewa is the district headquarters. Rewa is also known as the 'Land of White Tigers' as the first White Tiger was discovered here by Maharaja of the province, Martand Singh in 1951 in the nearby jungle of Govindgarh. Madhya Pradesh's only Sainik School is also situated in Rewa. Rewa was capital city of Vindhya Pradesh.

Shahdol District is a district of Madhya Pradesh state in east central India. It old name was Matsya raj or Virat kingdom in the name of great king Maharaja Virata. With a total area of 6,205 km2 (2,396 sq mi) and a population of 10,66,063. Shahdol is an important district of Madhya Pradesh. The town of Shahdol is the district headquarters. The district formerly comprised Shahdol division.

Sidhi District is one of the tribal districts of Madhya Pradesh state of India. The town of Sidhi is the district headquarters. The district is part of Rewa Division.

Satna is a major city in the Indian state of Madhya Pradesh. It serves as the headquarters of Satna district. It is 6th most largest city and 8th most populous city of the state. The city is 500 km east of the state capital Bhopal. The city is distributed over a land area of 111.9 square kilometres.

Sidhi is a town and a municipality in Sidhi district in the Indian state of Madhya Pradesh. It is the headquarters of the Sidhi district.

Birsinghpur is a sub district in Satna District in the state of Madhya Pradesh, India

Churhat is a town and a nagar panchayat in Sidhi district in the state of Madhya Pradesh, India.

The Syro-Malabar Catholic Eparchy of Satna is an Eastern Catholic eparchy in India, under the Syro-Malabar Catholic Church based in the town of Satna. It was erected on February 26, 1977. It is spread out in the northern part of the state Madhya Pradesh. It was made Suffragan ad Instar to the ecclesiastical Province of Bhopal in 1968.The Eparchy of Satna, which comprises seven civil districts of Madhya Pradesh, namely, Satna, Chhatarpur, Panna, Rewa, Sidhi, Singrauli and Tikamgarh, with a population of 1,11,20,815 was bifurcated from the diocese of Jabalpur. It was erected exarchy and entrusted to the Congregation of Vincentian Fathers by the Holy See on 29 July 1968 by the Papal Bull In More Est of Pope Paul VI. Msgr Abraham D Mattam of Vincentian Congregation was nominated its first Apostolic Exarch on 15 August 1968.

Madhya Pradesh is a state situated in the central India having an area of around 308000 km2. The state's administration operates through 50 districts, 282 tehsils / Blocks. In order to avail financial and social benefits of Information Technology, the establishment of State Wide Area Network (SWAN) has been envisaged. The SWAN will provide primary backbone for communication of voice, data and video throughout the state and will be an effective tool for implementation of e-Governance Projects.

Madhyanchal Gramin Bank is a regional rural bank in India. It is under the ownership of Ministry of Finance, Government of India. It was formed by merging three rural banks in the state of Madhya Pradesh in central India namely Madhya Bharat Bank, Sharda Grameen Bank, Rewa Sidhi Grameen Bank, sponsored by State Bank Of India, Allahabad Bank and Union Bank of India. Its headquarters is in Saugor. Current sponsor of the bank is State Bank of India. Madhyanchal Gramin Bank has presence over 13 districts in Madhya Pradesh Damoh, Sagar, Shivpuri, Guna, Ashoknagar, Tikamgarh, Chhatarpur, Panna, Satna, Rewa, Sidhi, Niwari and Singrauli. There are 454 branch and 7 regional offices in Rewa, Sidhi, Satna, Damoh, Shivpuri, Chhatarpur and Tikamgarh. 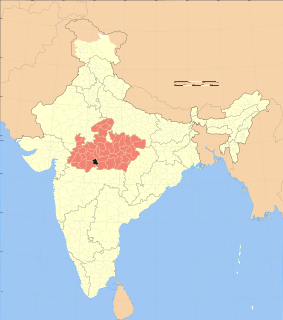