Aldo Maldera (Italian pronunciation:  [ˈaldo malˈdɛːra] ; 14 October 1953 – 1 August 2012) was an Italian footballer, who played as a full-back or as a wide midfielder on the left flank. A left-footed player, Maldera was a modern full-back who possessed an accurate and powerful shot, which earned him the nickname "Aldo-gol", due to his prolific goalscoring ability, despite his more defensive playing role; he was a hard-working team player, who was capable of covering the flank effectively and aiding his team both offensively and defensively. Throughout his career, he was known for his pace, stamina, technique, dribbling, and crossing ability; his speed and galloping offensive runs earned him the nickname "the horse". [1] [2] [3] [4]

Maldera was born in Milan, and he spent a large part of his career with one of the major local clubs of his city A.C. Milan (1971–1982); with the club, he won a Serie A title in 1979, two Coppa Italia trophies in 1972 and 1977, a Serie B title (earning promotion to Serie A the following season, following Milan's involvement in the 1980 Totonero football betting scandal) in 1981, and a Mitropa Cup, during his final season with the club, in 1982, also serving as the club's captain. Throughout his career, he also played for Bologna F.C. 1909 (for a half season loan, as a youth, during his time with Milan), local rivals Internazionale, A.S. Roma and A.C.F. Fiorentina.

Maldera won a total two Serie A titles throughout his career, at A.C. Milan and A.S. Roma respectively, both under the tutelage of manager Nils Liedholm. Maldera won his second career league title, with Roma, during the 1982–83 season, after leaving Milan following their relegation to Serie B at the conclusion of the 1981–82 season. Maldera this league victory up with a Coppa Italia with Roma in 1984, also reaching the European Cup final with Roma that season, only to lose out to Liverpool on penalties. [1] [5]

Maldera made 10 appearances for Italy between 1974 and 1980. He represented his country at the 1978 FIFA World Cup, [6] and at Euro 1980 on home soil, where the Italian national side finished in fourth place on both occasions, reaching the semi-finals. He also made 9 appearances for the Italy reserve, B, side, and 1 appearance with the Italy national Under-21 side. [1] [7]

Maldera was the third son of a family of Apulian immigrants in Milan. Aldo's older brothers Luigi Maldera and Attilio Maldera both played football professionally. To distinguish them, Luigi was referred to as Maldera I, Attilio as Maldera II and Aldo as Maldera III. [1]

Following his retirement, he worked as a football agent, and he lived in Rome with his wife. He also worked as member of the A.S. Roma youth system until 2004, and later also as Sport director of Greek club Panionios F.C. [5] with the president Zakiris and A.C. Milan's technical director Fabio Martella. [1] [5]

Franco Baresi is an Italian football youth team coach and a former player and manager. He mainly played as a sweeper or as a central defender, and spent his entire 20-year career with Serie A club Milan, captaining the club for 15 seasons. He is considered one of the greatest defenders of all-time and was ranked 19th in World Soccer magazine's list of the 100 greatest players of the 20th century. With Milan, he won three UEFA Champions League titles, six Serie A titles, four Supercoppa Italiana titles, two European Super Cups and two Intercontinental Cups.

Bruno Conti is an Italian football manager and former player. He coached Serie A club Roma from 14 March 2005 to 30 June 2005; he is currently head of the club's youth sector. Throughout his playing career, he was usually deployed as a winger, and also previously played for Roma, where he spent his entire club career, aside from two season-long loan spells with Genoa in the 1970s. He is considered by many in the sport to be one of the greatest Italian players of all time in his position. Nicknamed "The Mayor of Rome", he was an important figure in the club's history, and won a league title as well as five Coppa Italia titles during his time in the Italian capital. At international level, he was notably a member of Italy's 1982 FIFA World Cup winning team, and also took part at the 1986 FIFA World Cup. 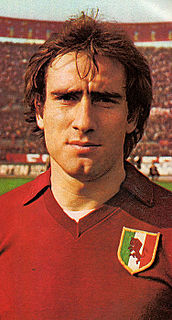 Francesco "Ciccio" Graziani is an Italian football manager and former football player who played as a forward.

Francesco Antonioli is an Italian former footballer who played as goalkeeper. He was the oldest footballer in Serie A until his club Cesena were relegated to Serie B at the end of the 2011–12 season, after which he retired from professional football. Antonioli began his club career with Monza and played for several Italian clubs throughout his career, winning titles with A.C. Milan, Bologna and Roma. Despite never being capped at senior international level, he was an unused member of the Italy squad the took part at Euro 2000, reaching the final. At youth level, he represented Italy at the 1992 Summer Olympics.

Fulvio Collovati is an Italian former footballer, who played as a defender. He was a stopper and also played for Italy at international level, winning the 1982 FIFA World Cup. As a player, he was regarded as one of Italy's best defenders during the 1970s and 1980s. An elegant, physically strong, and dynamic player, he was gifted with good technique and distribution, as well as excellent anticipation, movement, marking ability, and aerial prowess; because of his many defensive attributes, he was considered Roberto Rosato's heir at Milan.

Roberto Pruzzo is an Italian former football striker, now a coach. He currently is the Sports manager of Como. He represented Italy at UEFA Euro 1980. A prolific goalscorer, Pruzzo was one of the best Italian strikers of his generation, and he is regarded as one of Roma's greatest players. He was known as a physically strong and hard-working centre-forward throughout his career, with good technique, link-up play, hold-up play, and an eye for goal, but was renowned in particular for his heading accuracy, elevation, and ability in the air.

Romeo Benetti is a former Italian footballer, who played as a defensive midfielder. A tenacious player, Benetti played for several Italian clubs throughout his career, winning titles with A.C. Milan, Juventus and Roma. At international level, he represented the Italy national football team on 55 occasions between 1971 and 1980, and took part at the 1974 and 1978 FIFA World Cups, as well as UEFA Euro 1980, achieving fourth-place finishes in the latter two tournaments. 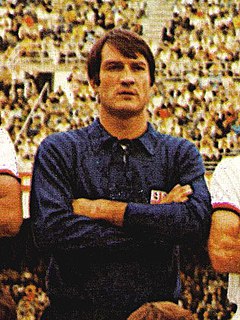 Enrico "Ricky" Albertosi is an Italian former footballer who played as a goalkeeper. Regarded as one of Italy's greatest ever goalkeepers, he had a successful club career, winning titles with Fiorentina, Cagliari, and Milan, before retiring with Elpidiense. He also played for the Italian national team in the 1966 World Cup and the 1970 World Cup, in which Italy reached the final, as well as being a member of the Italy teams that took part in the 1962 and 1974 World Cups. Albertosi was also included in the Italy squad that won the 1968 European Championship.

Franco Tancredi is an Italian former footballer who played as a goalkeeper for several Italian clubs, in particular Roma, and the Italy national team. He is a member of the A.S. Roma Hall of Fame.

Ángelo Benedicto Miguel Sormani is an Italian-Brazilian former football manager and player, who played as a forward; he was capable of playing anywhere along the front-line, as a centre-forward, as well as in an attacking midfield role, or also as a winger on the right flank. Born in Brazil, he represented the Italian national football team at the 1962 FIFA World Cup. Despite lacking pace, he was a physically strong, creative and intelligent player with excellent technical ability; throughout his career, he was known for his tactical versatility, power and determination, as well as his capability to take part in and initiate attacking plays due to his passing ability. Following his retirement, he also worked as a manager, coaching two clubs for which he formerly played: Roma, and Napoli.

Pierino Prati is a retired Italian footballer who played mainly as a forward. A talented and opportunistic player, with an eye for goal, Prati was capable of playing anywhere along the front-line, as a striker, supporting forward, and as a winger. At Milan, he was often deployed on the left wing due to his pace, technique, distribution, and was also known for his powerful and accurate shot from both inside and outside the penalty area, as well as his ability in the air. He began his career playing in Serie C1 with Salernitana, winning the title and promotion to Serie B during the 1965–66 season. His son, Cristiano, is also a footballer, who plays in the lower Italian divisions.

Ruben Buriani is an Italian former footballer who played as a midfielder. Following his retirement he worked as a sporting director for the Milan Youth sector.

Mario Bertini is a former Italian footballer defender and midfielder. Throughout his career Bertini played for Italian clubs Empoli, Fiorentina, Inter Milan, Prato, and Rimini; he spent nine seasons with Inter, winning a Serie A title in 1971. At international level, he represented the Italy national football team on 25 occasions between 1966 and 1972, scoring twice, and was a member of the team that reached the 1970 FIFA World Cup Final.

Alberto Orlando is an Italian former footballer who played at both professional and international levels as a forward. Although not gifted with the best technical ability, he was a fast, physical, energetic, opportunistic, and powerful player, who was good in the air; he often played on the wing or through the centre of the pitch.

Francesco Romano is a retired Italian footballer, who played as a midfielder. Romano was a creative deep-lying playmaker with notable technical ability, vision, passing, and tactical intelligence, who excelled at dictating the tempo of his team's play in midfield, and at providing assists for teammates. He is a former Italian international, and also a former Italy U-21 international. He currently works as a football agent.

Silvano Benedetti is an Italian former professional footballer who played as a defender.

Ubaldo Righetti is a retired Italian professional football player, who played as a defender; he was usually deployed as a centre-back.

Franco Superchi is a retired Italian professional footballer who played as a goalkeeper.

Luigi Maldera is an Italian football coach and former player who made more than 400 appearances in the Italian professional leagues playing as a defender. He played 5 seasons in Serie A for Hellas Verona, A.C. Milan and Catanzaro.