Last updated May 22, 2022
American academic society that gathers the work of folklorists

The American Folklore Society (AFS) is the US-based professional association for folklorists, with members from the US, Canada, and around the world, which aims to encourage research, aid in disseminating that research, promote the responsible application of that research, publish various forms of publications, advocate for the continued study and teaching of folklore, etc. [1] The Society is based at Indiana University and has an annual meeting every October. [2] The Society's quarterly publication is the Journal of American Folklore . The current president is Marilyn White. [3]

As of 2016, almost half of its 2,200 members practice their work outside higher education. In addition to professors, members include public folklorists, arts administrators, freelance researchers, librarians, museum curators, and others involved in the study and promotion of folklore and traditional culture. [4]

AFS was founded in 1888 by William Wells Newell, [5] who stood at the center of a diverse group of university-based scholars, museum anthropologists, and men and women of letters and affairs. In 1945, the society became a member of the American Council of Learned Societies. [6] AFS is also an active member of the National Humanities Alliance (NHS). [7]

AFS awards various prizes to honor outstanding work in the field of folklore, at the opening ceremony of the annual AFS meeting. These include the following:

Other prizes are awarded annually, by different sections of the American Folklore Society.

Every other year (in alternating years), AFS awards the following prizes:

John Avery Lomax was an American teacher, a pioneering musicologist, and a folklorist who did much for the preservation of American folk music. He was the father of Alan Lomax, John Lomax Jr. and Bess Lomax Hawes, also distinguished collectors of folk music. 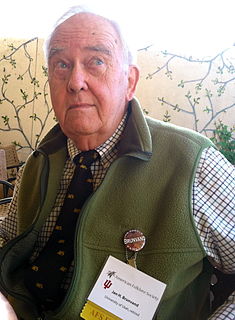 Jan Harold Brunvand is a retired American folklorist, researcher, writer, public speaker, and professor emeritus of English at the University of Utah.

Benjamin Albert Botkin was an American folklorist and scholar.

Henry Glassie, College Professor Emeritus at Indiana University Bloomington, has done fieldwork on five continents and written books on the full range of folkloristic interest, from drama, song, and story to craft, art, and architecture. Three of his books -- Passing the Time in Ballymenone, The Spirit of Folk Art, and Turkish Traditional Art Today -- were named among the "Notable Books of the Year" by The New York Times. Glassie has won many awards for his work, including the Charles Homer Haskins Prize of the American Council of Learned Societies for a distinguished career of humanistic scholarship. A film on his work, directed by Pat Collins and titled Henry Glassie: Field Work, had its world premiere at the Toronto International Film Festival in 2019.

The Journal of American Folklore is a peer-reviewed academic journal published by the American Folklore Society. Since 2003, this has been done on its behalf by the University of Illinois Press. The journal has been published since the society's founding in 1888. It publishes on a quarterly schedule and incorporates scholarly articles, essays, and notes relating to its field. It also includes reviews of books, exhibitions and events.

Pravina Shukla, Ph.D. is Provost Professor of Folklore at Indiana University Bloomington and serves as an adjunct faculty member in the Department of Anthropology, Department of American Studies, the Dhar India Studies Program, and the Center for Latin American and Caribbean Studies. She is also a consulting curator at the Mathers Museum of World Cultures.

Dorothy Noyes is an American folklorist and ethnologist whose comparative, ethnographic and historical research focuses on European societies and upon European immigrant communities in the United States. Beyond its area studies context, her work has aimed to enrich the conceptual toolkit of folklore studies (folkloristics) and ethnology. General problems upon which she has focused attention include the status of "provincial" communities in national and global contexts, heritage policies and politics, problems of innovation and creativity, and the nature of festival specifically and of cultural displays and representations generally.

Roger David Abrahams was an American folklorist whose work focused on the expressive cultures and cultural histories of the Americas, with a specific emphasis on African American peoples and traditions.

Linda Dégh was a folklorist and professor of Folklore & Ethnomusicology at Indiana University, USA. 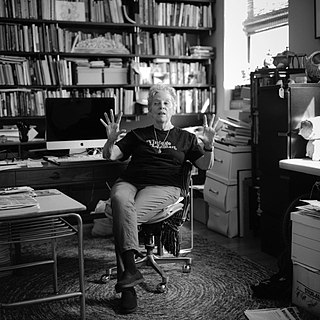 Kay Turner is an artist and scholar working across disciplines including performance, writing, music, exhibition curation, and public and academic folklore. She is noted for her feminist writings and performances on subjects such as women’s home altars, fairy tale witches, and historical goddess figures. She co-founded “Girls in the Nose,” a lesbian feminist rock punk band that anticipated riot grrl.

Don Yoder was an American folklorist specializing in the study of Pennsylvania Dutch, Quaker, and Amish and other Anabaptist folklife in Pennsylvania who wrote at least 15 books on these subjects.

The Wayland D. Hand Prize is an award given by the History and Folklore section of the American Folklore Society (AFS) for the best book combining historical and folkloristic methods and materials. The biennial prize honors the eminent folklorist Wayland D. Hand (1907-1986), a former president of the American Folklore Society (1955-1967) who in his teaching and scholarship encouraged historical methodology in folklore research.

Jane C. Beck is an American folklorist and oral historian. She is Executive Director Emeritus and founder of the Vermont Folklife Center and has published research on the folklore of Vermont and on African American belief systems.

MacEdward Leach (1892-1967) was an American folklorist, whose work "greatly influenced the development of folklore as an academic discipline".