It has been played since 2003. It is a single match at the beginning of the season between the winners of the Andorran First Division and the Andorran Cup. Every match is played in the Aixovall, Andorra la Vella.

Results of the finals

The Andorran Football Federation is the governing body of football in Andorra. It was founded in 1994 and joined as a member of FIFA and UEFA in 1996. It organizes the football league, Andorran First Division, the Andorran Cup and Andorran Supercup, and the Andorran national football team. It is based in Escaldes-Engordany.

Gabriel Francisco García de la Torre, known as Gabri, is a Spanish retired footballer, and a manager, who is currently in charge of Lleida Esportiu. Mainly a midfielder who could play in the right or the middle, he could also appear as an attacking right back, tackling and passing skills being his main assets.

Romik Khachatryan is an Armenian retired football player. He was formerly a member of the Armenia national team.

Aghvan Varazdati Mkrtchyan is a former Armenian football defender. He was also a member of the Armenia national team, participated in 44 international matches and scored 1 goal since his debut in away friendly match against Andorra on 7 June 2002.

Marc Pujol Pons is an Andorran footballer. He currently plays for Inter Club d'Escaldes in Andorra's Primera Divisió and the Andorran national team. Pujol has scored 3 goals for Andorra in competitive fixtures.

Suad Liçi is an Albanian football midfielder who last played for KS Vllaznia Shkoder in 2008–2009 season in the Albanian Superliga before retiring. 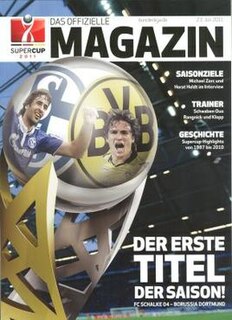 The 2011 DFL-Supercup was the second DFL-Supercup, an annual football match contested by the winners of the previous season's Bundesliga and DFB-Pokal competitions. It was a Revierderby between 2010–11 Bundesliga winners Borussia Dortmund, and 2010–11 DFB-Pokal winners Schalke 04. The match was played at Gelsenkirchen on 23 July 2011.

Rúnar Már Sigurlaugarson Sigurjónsson is an Icelandic professional footballer who plays as a midfielder for Romanian club CFR Cluj and the Iceland national team.

Taron Voskanyan is an Armenian football player who plays for FC Alashkert and the Armenian national team. 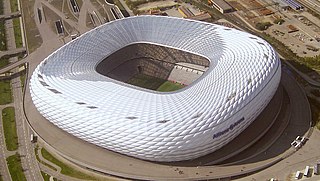 The 2020 DFL-Supercup was the eleventh edition of the German super cup under the name DFL-Supercup, an annual football match contested by the winners of the previous season's Bundesliga and DFB-Pokal competitions. The match was played on 30 September 2020. The match is usually played in July or August prior to the start of the Bundesliga. However, due to postponement of the 2019–20 Bundesliga as a result of the COVID-19 pandemic, the start of the 2020–21 season was delayed until September 2020. Due to the COVID-19 pandemic, the match was played behind closed doors. 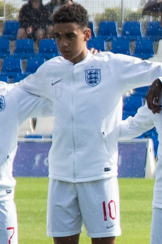 Jamal Musiala is a professional footballer who plays as an attacking midfielder for Bundesliga club Bayern Munich and the Germany national team.