The USSR Super Cup, or Season's Cup (Russian : Кубок сезона) was an unofficial exhibition game (or game series) not sanctioned by the Football Federation of the Soviet Union and that featured the winners of the previous season's Soviet Top League and USSR Cup in a one- or two-legged playoff for the trophy.

The mini-tournament was conducted on the initiative of the Komsomolskaya Pravda editor's administration out of Moscow. The tournament was unofficial and never was part of the Football Federation of the Soviet Union. It was played seven times in the last 15 years of Soviet football. It was not until 1983 that the Super Cup was played every year. The Super Cup was made to take place during midseason and further complicated clubs' schedules.

In 1987, with Spartak Moscow winning league honors and Dynamo Kyiv winning the USSR Cup, the Super Cup match was scheduled to take place in Chişinău, Moldova. However, the match never took place because of inadequate facilities in Chişinău. The last USSR Super Cup took place in Sochi, Russia, where the match was played in front of 1,500 fans. 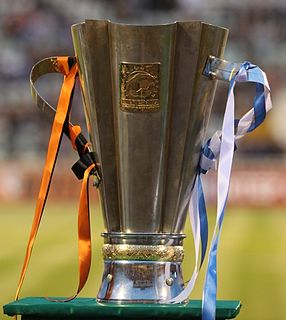 Ukrainian Super Cup is an association football game of the Ukrainian Premier League in traditional super cup format that acts as the grand-opening for every new football competition season in Ukraine. Originally it was set as a contest between the winners of the previous season's Ukrainian Championship and Ukrainian Cup. From 2008 through 2014, it was branded as the Inter Super Cup of Ukraine, in 2017 – Super Cup Fokstrot.

The 1985 FIFA World Youth Championship, the fifth edition of the FIFA World Youth Championship, was held in the Soviet Union (USSR) from 24 August to 7 September 1985. The tournament took place in ten venues within eight host cities — Baku, Yerevan, Leningrad, Minsk, Moscow, Hoktemberyan, Tbilisi and Sumqayit — where a total of 32 matches were played. The winner was Brazil, which managed to retain the title, by beating Spain by 1–0, in the final played at Moscow's Luzhniki Stadium.

Like the championship, the first edition of the Cup had a tight schedule as the Football Federation of Ukraine was given just several months in order to switch to the European seasonal format with the minimum required matches played.

The 1995 Commonwealth of Independent States Cup was the third edition of the competition between the champions of former republics of Soviet Union. It was won third time in a row by Spartak Moscow who defeated Georgian side Dinamo Tbilisi in the final. This was the first time Ukraine was represented at the tournament, as well as the first time when three points were awarded for a win.

The 2009 Commonwealth of Independent States Cup was the seventeenth edition of the competition between the champions of former republics of Soviet Union. It was won by Sheriff Tiraspol for the second time.

The Russian Cup 1994–95 was the third season of the Russian football knockout tournament since the dissolution of Soviet Union.

The 1st USSR Federation Cup was brief and took place between 21 September through 4 November. Its final was played at the Republican Stadium in Kishinev.

The 1991–92 Soviet Cup was the last edition of an already non-existing political entity, the Soviet Union.

The United Tournament or United Supercup was an exhibition football club tournament between two best clubs from Ukraine and two from Russia. The context of the tournament were the talks which are held regarding creating the United CIS championship, or joint Russia–Ukraine league. The organisers of the tournament were the same people in charge of drafting a proposal for the united league., but at the second edition it was changed to a round-robin.

The 2006 Commonwealth of Independent States Cup was the fourteenth edition of the competition between the champions of former republics of Soviet Union. It was won by Neftchi Baku for the first time.

The 1976 Soviet Cup Final was a football match that took place at the Lenin's Central Stadium, Moscow on 3 September 1976. The match was the 35th soviet cup final and was contested between Dinamo Tbilisi and Ararat Yerevan. Ararat were current cup holders winning it in 1975. Dinamo defeated the opponent 3–0 and won the cup for the first time.

The 1979 Soviet Cup Final was a football match that took place at the Lenin's Central Stadium, Moscow on 11 August 1979. The match was the 38th soviet cup final and was contested between Dynamo Moscow and Dinamo Tbilisi. Previous cup holders Dynamo Kyiv were eliminated in Quarter-finals by CSKA Moscow. Dinamo Tbilisi defeated the opponent on penalties and won the cup for the second time. 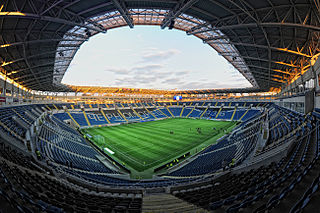 The 2019 Ukrainian Super Cup became the 16th edition of Ukrainian Super Cup, an annual season opener football match contested by the winners of the previous season's Ukrainian Top League and Ukrainian Cup competitions or the league's runner-up if the National Cup was won also by league champions.