Anthony Griffin (born 26 August 1966) is an Australian professional rugby league coach who is the Head coach of the St George Illawarra Dragons in the NRL and a former rugby league footballer.

He played in the Brisbane Rugby League premiership during the 1980s before taking up coaching. After success in the Queensland Cup and Toyota Cup competitions, Griffin replaced Ivan Henjak as head coach of the Brisbane Broncos from 2011 to 2014 and later served as head coach for the Penrith Panthers from 2016 to 2018. Griffin will coach the St. George Illawarra Dragons from 2021, on a 2 year contract. [4]

Griffin played in the Brisbane Rugby League premiership for Brothers from 1985 to 1987 largely as a hooker. He then played for Brothers in Rockhampton from 1988 to 1992.

Griffin coached the colts teams for Redcliffe (1995–97), winning the premiership in 1997. [6] The following year he moved to Brisbane Norths, taking them to the colts premiership in his first year there, and also coaching the Queensland under 17s representative team in 1998. After another colts premiership with Norths in 2000, Griffin joined the coaching staff of the NRL's Melbourne Storm and was Chris Anderson's then Mark Murray's assistant in 2001 and 2002. Returning to Queensland, he coached the Souths Logan Magpies in the Queensland Cup from 2003 to 2004. He then joined the Redcliffe Dolphins, coaching them from 2005 to 2007 and winning the competition with them in 2006. He also coached the Queensland Residents side in 2007.

Griffin coached the Brisbane Broncos' under-20s side to the 2008 Toyota Cup (Under-20s) season's Grand Final. He was appointed as assistant to head coach Ivan Henjak for the 2010 NRL season, in which the Broncos failed to make the finals series for the first time since 1991. [7]

Less than three weeks from the beginning of the 2011 NRL season, Griffin became the third ever coach of the Broncos when he was unexpectedly announced to be replacing Henjak. After losing their first match, the Broncos went on to win seven matches in a row, to be sitting equal top of the ladder with the St. George Illawarra Dragons at the conclusion of Round 8. Griffin employed a policy of resting key players such as Darren Lockyer and Sam Thaiday after mid-season representative matches and Brisbane's ladder position slipped. However they returned to the top four after the 2011 State of Origin series. The Broncos finished the regular season in third place, their best finish to the regular season since their last premiership in 2006. Griffin then took them to within one match of the grand final. However without injured captain Darren Lockyer Brisbane were knocked out of contention by eventual premiers, the Manly-Warringah Sea Eagles.

During the 2014 NRL season it was announced that Griffin would not be head coach of the Broncos the following season due to the return of the club's foundation coach, Wayne Bennett.

On 21 October 2015 it was announced that Griffin had accepted the head coaching position with the Penrith Panthers on a three-year deal. [8] On 4 October 2017, Griffin signed a new two year extension to stay as Penrith coach until the end of 2020 after guiding the club to consecutive finals appearances. [9] On 6 of August 2018, Griffin and the Penrith Panthers club decided to part ways with immediate effect, leaving assistant coach Cameron Ciraldo as caretaker coach.

In the aftermath of being sacked by Penrith, Griffin and Gould proceeded to trade barbs in the media. Gould went on record as saying “We just got the feeling that everything Anthony has brought to the club over the last three years, we’ve probably seen the best of it … I think the pressure from the media and constant speculation was eating away at him … Anthony is very old school, he likes to do everything himself. I think in the modern day age the head coach has got to rely on the expertise, knowledge and assistance".

Griffin later came out and said “He hasn’t coached for 20 years. He hasn’t had his head in the fire for 20 years. If there’s anyone old school in the conversation — if I’m in the conversation about being old school, he’d need to be there as well". Griffin then later spoke of Gould claiming that he was sad after a win and happy after a loss. Griffin told the media “We were officially on top of the ladder, having overcome this huge run of injuries earlier in the year, but nothing. When we lost there was always an inquiry, how had we had failed in our preparation, but there was never any inquiry when we won". “I have never seen him so happy than when Brisbane put 50 on us. And then I’ve never seen him so agitated than when we just beat Manly (in a 28-24 thriller at Brookvale Oval on July 28 2018)". [10] [11]

On 7 September 2020, Griffin was appointed head coach of St. George Illawarra. He was granted a two-year contract to begin in 2021, with a third year in the club's favour, following the sacking of Paul McGregor earlier in the 2020 NRL season. [4]

In round 2 of the 2021 NRL season, he earned his first win as St. George head coach as the club defeated North Queensland 25-18 at the Queensland Country Bank Stadium. [12]

In 2019, Griffin joined the 2GB Continuous Call Team program as one of the co-commentators for selected matches. [13]

The Brisbane Broncos Rugby League Football Club Ltd., commonly referred to as the Broncos, are an Australian professional rugby league football club based in the city of Brisbane, the capital of the state of Queensland. Founded in April 1988, the Broncos play in Australia's elite competition, the National Rugby League (NRL) premiership. They have won six premierships, including two NSWRL titles, a Super League premiership and three NRL premierships. They also have two World Club Challenges. The Broncos have achieved four minor premierships during their 33 years in multiple competitions, making them Rugby League's most successful club over the past three decades. Until 2015, Brisbane had never been defeated in a grand final, and since 1991, have only failed to qualify for the finals three times. They are one of the most successful clubs in the National Rugby League since it began in 1998, winning three premierships. It is also one of the most successful clubs in the history of rugby league, having won 60.7% of games played since its induction in 1988, second only to Melbourne Storm with 66.3%.

The Penrith Panthers are an Australian professional rugby league football team based in the western Sydney suburb of Penrith that competes in the National Rugby League (NRL). The team is based 55 km west of the centre of Sydney and at the foot of the Blue Mountains.

The Gold Coast Titans are a professional rugby league football club, based on the Gold Coast, Queensland, Australia. The club competes in the National Rugby League (NRL) premiership, Australia's elite rugby league competition. It is the newest of the sixteen clubs in the league, having commenced its inaugural season on 18 March 2007. Since 2008, the Titans have played their home games at Cbus Super Stadium in Robina, Queensland.

Matthew Elliott is an Australian professional rugby league football coach, commentator and former player. He has previously coached in the NRL with the Canberra Raiders, Penrith Panthers and the New Zealand Warriors, as well the Bradford Bulls in the Super League and the United States national team. Elliott is currently the Assistant Coach at the St. George Illawarra Dragons. 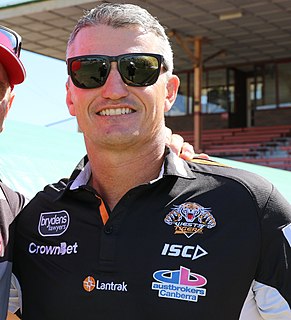 The 2004 NRL season was the 97th season of professional rugby league football in Australia, and the seventh run by the National Rugby League. Fifteen clubs competed during the regular season before the top eight finishing teams contested the finals series. The Bulldogs defeated the Sydney Roosters in the 2004 NRL grand final and in doing so claimed their eighth premiership.

Petero Civoniceva, is an Fijian-Australian former professional rugby league footballer who played in the 1990s, 2000s and 2010s. A Queensland State of Origin and Australian international representative prop forward, in 2009 he broke the record for most international matches for Australia of any forward in history. Civoniceva played his club football for the Brisbane Broncos, with whom he won the 1998, 2000 and 2006 NRL Premierships, as well as for the Penrith Panthers, whom he captained. Late in his career whilst playing for the Redcliffe Dolphins in the Queensland Cup, Civoniceva captained the Fiji national team in their 2013 Rugby League World Cup campaign. The Petero Civoniceva Medal is awarded to the Australian Fijian rugby league footballer of the year, while the Civoniceva Medal is awarded to the Queensland Cup player voted as the best and fairest. 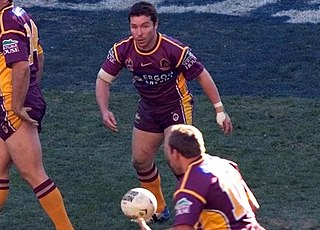 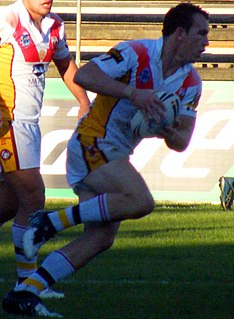 Nick Emmett is an Australian former professional rugby league footballer who played for the Brisbane Broncos and the St. George Illawarra Dragons in the National Rugby League. He also played for the Redcliffe Dolphins in the Queensland Cup. 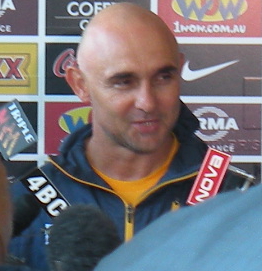 Ivan Henjak is an Australian former professional rugby league footballer and coach. A New South Wales Country representative half back, Henjak played his club football in the NSWRL premiership with the St. George Dragons, Canberra Raiders and Western Suburbs Magpies. He later became head coach for the Brisbane Broncos of the National Rugby League, the second ever, having taken over from Wayne Bennett in 2009. Henjak is also the uncle of Australia international rugby union player Matt Henjak, while Henjak's son played front row for Australian Schoolboys. 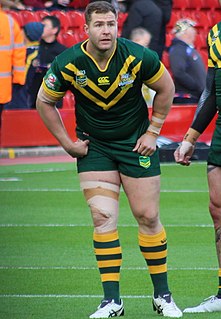 Trent Merrin is a former Australian professional rugby league footballer who played as a lock, prop and second-row forward for the St George Illawarra Dragons in the NRL and Australia at international level.

The history of the Penrith Panthers stretches back to the 1960s when a team from Penrith entering Sydney's elite competition was first mooted. After admission to the NSWRFL premiership in 1967, the club struggled on-field until reaching the finals for the first time in the 1980s, and reaching the grand final in the 1990s. The Panthers were a part of 1997's Super League competition before continuing in the re-unified NRL competition. To date they have won two premierships: 1991 and 2003.

Gerard Beale is a New Zealand international rugby league professional footballer who plays for the St. George Illawarra Dragons in the NRL.

The 2011 Brisbane Broncos season was the 24th in the club's history. They competed in the NRL's 2011 Telstra Premiership, finishing the regular season 3rd. The Broncos then came within one match of the grand final but were knocked out by eventual premiers, the Manly-Warringah Sea Eagles. It was the last season for Brisbane's captain, all-time top points scorer and most-capped player, Darren Lockyer. Lockyer was also named the Broncos player of the season.

The 2013 Brisbane Broncos season was the 26th in the club's history. Coached by Anthony Griffin and captained by Sam Thaiday, they competed in the NRL's 2013 Telstra Premiership. Brisbane finished the regular season in 12th, thus failing to qualify for the finals for the first time since 2010.

The 2014 Brisbane Broncos season was the 27th in the club's history. Coached by Anthony Griffin and co-captained by Justin Hodges and Corey Parker, they competed in the NRL's 2014 Telstra Premiership, finishing the regular season eighth to make it into the finals. The Broncos were then knocked out of contention in the first game of the finals against the North Queensland Cowboys.

Darren Nicholls is an Australian professional rugby league footballer who plays as a halfback for the Souths Logan Magpies in the Intrust Super Cup.

The 2020 NRL season was the 113th of professional rugby league in Australia and the 23rd season run by the National Rugby League.