The awards are named for Arthur Ellis, the pseudonym of Canada's official hangman. The award statue itself is wooden model of a hanging man. The arms and legs move when the statue's string is pulled.

First awarded in 2007 as part of the CWC mandate to recognize and promote the careers of promising new crime writers.

This is a special achievement award for contributions to the genre of crime and mystery writing, awarded at the discretion of the president of the Crime Writers of Canada. When first presented in 1984, it was known as the Chairman's Award; it was later renamed in honour of its first recipient, Derrick Murdoch. Since 2013, it has only been presented in years when the new biennial Grand Master Award, listed below, is not presented.

The Grand Master Award is presented every two years as a lifetime achievement award, to a crime writer with a distinguished and successful national and international career.

The award for Best Genre Criticism or Reference has only been presented twice.

The award for Best Play has only been presented once. 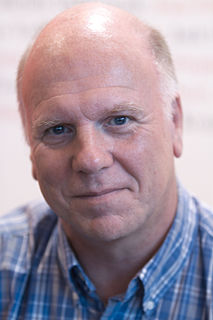 Peter Robinson is an English-Canadian crime writer. He is best known for his crime novels set in Yorkshire featuring Inspector Alan Banks. He has also published a number of other novels and short stories as well as some poems and two articles on writing.

Laurali Rose "Bunny" Wright was a Canadian writer of mainstream fiction and mystery novels. Many of her stories are set on the coast of British Columbia.

Eric Wright was a professor of English and Canadian writer of mystery novels.

Innocent Graves is the eighth novel by Canadian detective fiction writer Peter Robinson in the Inspector Banks series of novels. The novel was first printed in 1996, but has been reprinted a number of times since. The novel was selected by Publishers Weekly as one of the best mysteries of the year, nominated for the 1996 Hammett Prize, and won the 1997 Arthur Ellis Award for 'Best Novel'.

Norah McClintock was a Canadian writer of young adult fiction.

Capital Crime Writers (CCW) is a non-profit crime and mystery writing organization located in Ottawa, Ontario, Canada. It was founded in 1988 by Linda Wiken and Audrey Jessup.

William Herbert Deverell is a Canadian novelist, activist, and criminal lawyer. He is one of Canada's best-known novelists, whose first book, Needles, which drew on his experiences as a criminal lawyer, won the McClelland & Stewart $50,000 Seal Award. In 1997 he won the Dashiell Hammett Prize for literary excellence in crime writing in North America for Trial of Passion. That book also won the 1998 Arthur Ellis Award for best Canadian crime novel, as did April Fool in 2003. Trial of Passion launched his first crime series, featuring the classically trained, self-doubting Arthur Beauchamp, QC, a series that continued with April Fool, Kill All the Judges, Snow Job, and I'll See You in My Dreams. 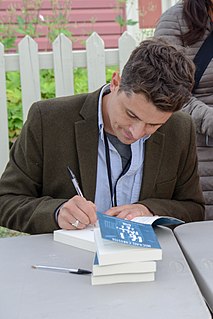 John Lawrence Reynolds is a Canadian author. He has published more than 20 fiction and non-fiction books. Two of his novels won the Arthur Ellis Award—The Man Who Murdered God (1990) and Gypsy Sins (1994). Born in Hamilton, Ontario, he has lived in Burlington for several years.

Steve Burrows is a Canadian mystery writer, journalist, and past recipient of a “Nature Writer of the Year” award from BBC Wildlife. His 2014 novel, A Siege of Bitterns, received widespread critical acclaim upon its release and was named one of the top 100 books of 2014 by The Globe and Mail before going on to win the 2015 Arthur Ellis Award for Best First Novel.