Early life and career with CBC

Penny was born in Toronto [1] in 1958. [2] Her mother was an avid reader of both fiction and non-fiction, with a particular liking for crime fiction, [3] and Louise grew up reading mystery writers such as Agatha Christie, Georges Simenon, Dorothy L. Sayers, and Michael Innes. [3]

Penny earned a Bachelor of Applied Arts (Radio and Television) from Ryerson Polytechnical Institute (now Ryerson University) in 1979. [4] After graduation, at age 21, she embarked on an 18-year career as a radio host and journalist with the Canadian Broadcasting Corporation. [5] At the start of her broadcasting career, Penny took postings at locations far from friends and family, and to help deal with feelings of loneliness and isolation, she increasingly turned to alcohol. At age 35, she admitted to an alcohol problem, and has been sober since. [6] Shortly afterward, she met her future husband, Michael Whitehead, head of hematology at Montreal Children's Hospital, [7] on a blind date. [6]

After her marriage, Penny left the CBC to take up writing. She started a historical novel but had difficulty finishing it, and eventually switched to mystery writing. [6] She entered her first novel, Still Life, in the "Debut Dagger" competition in the United Kingdom, placing second out of 800 entries. [6] The novel won other awards, including the "New Blood" Dagger award in the United Kingdom, the Arthur Ellis Award in Canada for best first crime novel, the Dilys Award, [8] the Anthony Award and the Barry Award for Best First Novel in the United States.

Penny continues to write, garnering major crime novel award nominations for almost every one of her novels and subsequently winning several of those awards. [8]

Her work features Chief Inspector Armand Gamache, head of the homicide department of the Sûreté du Québec. [9] The novels are set in the province of Quebec but feature many hallmarks of the British whodunit genre, including murders by unconventional means, bucolic villages, large casts of suspects, red herrings, and a dramatic disclosure of the murderer in the last few pages of the book. [10]

Penny currently lives in Knowlton, a small village in Quebec's Eastern Townships about 100 km from Montreal, Quebec. [1] Her husband Michael died on September 18, 2016. [11]

For several years, Penny resisted selling the TV or movie rights to her books, afraid of losing creative control of her characters. [14] However, when approached by PDM Entertainment and Attraction Images and offered a position as executive producer during film production, she changed her mind and agreed to sell them the rights to her first two novels. [14] Still Life went into production in the fall of 2012, with British actor Nathaniel Parker cast as Chief Inspector Gamache. [14] The movie aired on CBC TV in 2013. [14] In September, 2021, production of Three Pines began in Montreal and rural Quebec, starring Alfred Molina. [15]

The Sûreté du Québec, abbreviated SQ, is the provincial police service for the Canadian province of Quebec. No official English name exists, but the agency's name is sometimes translated to "Quebec Provincial Police" in English-language sources. The headquarters of the Sûreté du Québec are located on Parthenais Street in the city's downtown core of Montreal and the service employs roughly 5,500 officers. SQ is the second largest provincial service and fourth largest service in Canada.

Penny Warner is an American mystery writer who has won multiple Agatha Awards. She has also written more than 50 books on subjects ranging from cooking to parenting guides to party and activity books.

The Cruelest Month, by Louise Penny, is the third novel in the Three Pines Mysteries series, which feature Inspector Armand Gamache.

A Fatal Grace, by Louise Penny, published in Canada as Dead Cold, is the second novel in the Three Pines Mysteries series, which feature Inspector Armand Gamache. 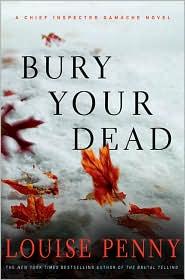 Bury Your Dead is a book written by Louise Penny and published by Minotaur Books on 28 September 2010, which later went on to win the Anthony Award for Best Novel in 2011.