Charlaine Harris Schulz (born November 25, 1951) is an American author who specializes in mysteries. [2] She is best known for her book series The Southern Vampire Mysteries , which was adapted as the TV series True Blood . The television show was a critical and financial success for HBO, running seven seasons, from 2008 through 2014. [3] A number of her books have been bestsellers and this series was translated into multiple languages and published across the globe.

Harris was born and raised in a small town in the Mississippi River Delta area of the United States. She now lives in Texas with her husband; they have three grown children and grandchildren. [2] She began writing from an early age, and changed from playwriting in college to writing and publishing mysteries, including several long series featuring recurring characters.

Harris was born and grew up in Tunica, Mississippi, in the Mississippi Delta. In her early work she wrote poems about ghosts and teenage angst. She began writing plays while attending Rhodes College in Memphis, Tennessee. Her most recent mysteries have been in the urban fantasy genre.

After publishing two stand-alone mysteries, Harris began the lighthearted Aurora Teagarden books with Real Murders, nominated as a Best Novel 1990 for the Agatha Awards. Harris wrote several books in the series before the mid-1990s, when she began branching out into other works. [3] She did not resume the series until 1999, with the exception of one short story in a Murder, She Wrote anthology titled "Murder, They Wrote".

In 1996, Harris published the first in the Shakespeare series, featuring cleaning lady detective Lily Bard, set in rural Arkansas. At the time, a New York Times interview with Harris noted that she "live[d] in small-town Arkansas". [3] The fifth book in the series, Shakespeare's Counselor, was published in fall 2001, followed by the short story "Dead Giveaway", published in the Ellery Queen Mystery Magazine in December 2001. Harris has said she is finished with that series.

Next Harris created The Southern Vampire Mysteries series, about a telepathic waitress named Sookie Stackhouse who works in a Northern Louisiana bar. [3] The first book, Dead Until Dark, won the Anthony Award for Best Paperback Mystery in 2001. Each book follows Sookie as she tries to solve mysteries involving vampires, werewolves, and other supernatural creatures. [3] The series has been published in Australia, New Zealand, Japan, Spain, Greece, Germany, the Netherlands, Belgium, France, Italy, Argentina, Poland, Serbia, Brazil, Great Britain, Ireland, Mexico, Norway, Finland, Sweden, Denmark, Lithuania, Hungary, Bulgaria, Portugal, Iceland, Czech Republic, Romania, Estonia, and Israel. Harris wrote thirteen novels in the series; the last, Dead Ever After, was published in May 2013. [4] A supplemental book, After Dead, was published in October 2013. [5]

October 2005 marked the debut of Harris's new series, entitled The Harper Connelly Mysteries, with the release of Grave Sight . The series is told by a young woman named Harper Connelly, who after being struck by lightning, is able to locate dead bodies and to see their last moments through the eyes of the deceased. [6] In October 2010, it was announced Harper Connelly's series had been optioned for a television series named Grave Sight.

2014 marked the debut of the Cemetery Girl series, a graphic novel series co-written with Christopher Golden and illustrated by Don Kramer. [7]

In her personal life, Harris has long been married. She and her husband have three grown children and two grandchildren. [3] She is a former weightlifter and karate student, [9] she is also an avid reader and cinemaphile. Harris formerly resided in Magnolia, Arkansas, where she was the senior warden of St. James Episcopal Church, [3] [10] and currently lives in Texas. [11]

Her series of novels The Southern Vampire Mysteries was adapted into the show True Blood . The series lasted seven seasons and totaled 80 episodes. It was nominated for dozens of awards. True Blood aired on HBO. The show was also the most viewed show on HBO since The Sopranos.[ citation needed ]

Harris's series Midnight, Texas was developed as a TV series by NBC and began airing on their network in 2017. [19]

Eric Northman is a fictional character in The Southern Vampire Mysteries, a series of thirteen books written by New York Times bestselling author Charlaine Harris. He is a vampire, slightly over one thousand years old, and is first introduced in the first novel, Dead Until Dark and appears in all subsequent novels. Since the book series is told from the first person perspective of Sookie Stackhouse, what readers perceive of his character is influenced by what Sookie comprehends. HBO's television series True Blood is based on this book series and the character of Eric Northman is portrayed somewhat differently. A list of True Blood characters has a detailed description of Eric's character from the TV show.

The Southern Vampire Mysteries, also known as The True Blood Novels and The Sookie Stackhouse Novels, is a series of books written by bestselling author Charlaine Harris. The first installment, Dead Until Dark (2001), won the Anthony Award for Best Paperback Mystery in 2001 and later served as the source material for the HBO drama series True Blood (2008–2014). The book series has been retronymed the True Blood Series upon reprinting, to capitalize on the television adaptation.

William Erasmus "Bill" Compton is a fictional character from The Southern Vampire Mysteries/Sookie Stackhouse series by author Charlaine Harris. He is a vampire and is introduced in the first novel in the series, Dead Until Dark, and has appeared in all of the novels since. In the fifth season of the television adaption, Bill plays the role of the main antagonist. 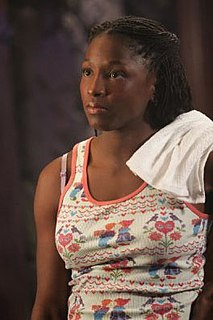 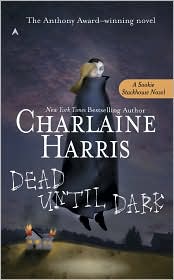 Dead Until Dark, published in 2001, is the first novel in Charlaine Harris' series The Southern Vampire Mysteries. It was adapted into True Blood's first season.

Living Dead in Dallas is the second book in Charlaine Harris's series The Southern Vampire Mysteries. This second novel follows the adventures of telepathic waitress Sookie Stackhouse of Bon Temps, Louisiana, as she is employed by Dallas vampires to use her telepathy to help find their lost companion. Sookie agrees to help investigate the whereabouts of the missing vampire on one condition: any humans found to be involved must be turned over to human law enforcement rather than subjected to vampire justice. In Dallas Sookie Stackhouse has her first encounter with the anti-vampire organization "The Fellowship of the Sun," as well as meeting and learning of the existence of werewolves. 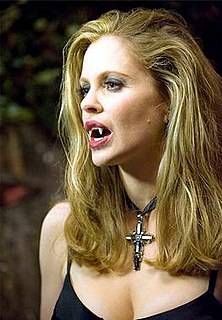 Pamela Ravenscroft, known as Pamela Swynford De Beaufort in True Blood, is a fictional character from The Southern Vampire Mysteries by author Charlaine Harris. She is a vampire, Eric Northman's lesbian prodigy and second-in-command and co-owner of Fangtasia, a vampire bar. Her age is not mentioned; Sookie thinks that she is over 200 years old. It is later revealed, in the short story "Two Blondes," that she's 160 years old, give or take a decade.

From Dead to Worse is the eighth book in Charlaine Harris's series The Southern Vampire Mysteries.

Alcide Herveaux is a fictional character from the Southern Vampire Mysteries/Sookie Stackhouse novels by author Charlaine Harris. He is a Were who owns a construction company in Jackson, Mississippi with his father. He is depicted as a tall man with green eyes, olive skin, and thick, tousled black hair.

Niall Brigant is a fictional character from The Southern Vampire Mysteries by author Charlaine Harris. He first appears in From Dead to Worse. He is Sookie and Jason Stackhouse's great-grandfather and Claude and Claudine's grandfather. He is tall and slim, extremely handsome with long pale gold hair. Sookie describes Niall as being a lovely creature and having some age to him.

The first season of the American television drama series True Blood premiered on September 7, 2008 and concluded on November 23, 2008. It consists of 12 episodes, each running approximately 55 minutes in length and was, for the most part, based on the novel Dead Until Dark, the first entry in The Southern Vampire Mysteries by Charlaine Harris. The story takes place in the fictional town of Bon Temps, Louisiana, two years after vampires have made their presence known to mankind, and follows telepathic waitress Sookie Stackhouse as she attempts to solve a series of murders that seem to be motivated by a hatred of vampires.

Dead in the Family is a 2010 New York Times Bestselling Gothic mystery novel by Charlaine Harris and the tenth book in her The Southern Vampire Mysteries series. The novel was released on May 4, 2010 by Ace Books and follows Sookie as she deals with her increasingly more complicated romantic and personal relationships with the supernatural creatures around her.

The Harper Connelly Mysteries is a series of fantasy mystery novels written by Charlaine Harris, and first published in 2005. Harris is known best for penning The Southern Vampire Mysteries, a series rich in supernatural characters such as vampires, telepaths, werewolves, shapeshifters and fairies; she has also written more traditional (non-paranormal) mysteries. The Harper Connelly Mysteries is also centered on a character with supernatural abilities, however these abilities are more subtle than in The Southern Vampire Mysteries.

Dead Reckoning is a 2011 New York Times Bestselling gothic romance novel by Charlaine Harris and is the eleventh book in her Southern Vampire Mysteries series. The book was released on May 3, 2011 by Ace Books and deals with Sookie discovering more about her heritage and dealing with more supernatural difficulties.

Dahlia is a fictional character from The Southern Vampire Mysteries/Sookie Stackhouse Series by author Charlaine Harris. However, she only appears briefly in the novels and the only time she appears on the same page as Sookie Stackhouse is in All Together Dead. Dahlia is the main character in a computer game and in a growing number of non-Sookie-related—though set in the same fictional universe—short stories.
She is a vampire and lives in the city of Rhodes, Iowa. 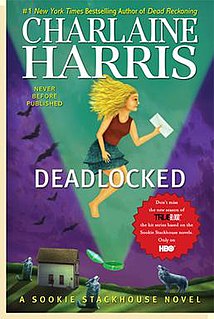 Deadlocked is a 2012 urban fantasy novel by American author Charlaine Harris and is the twelfth and penultimate book in her The Southern Vampire Mysteries. The book was released on May 1, 2012 by Ace Books.