Anne Carroll George 91927-2001) was an American author and poet. [1] [2] A collection of her poetry, Some of it is True (1993, Curbow Publications), was nominated for the Pulitzer Prize in 1993, and her Southern Sisters mystery series was honored with the coveted Agatha Award. [3] She graduated from Samford University [4] and was Alabama's 1994 state poet and cofounder of Druid Press. George died in 2001 of complications during heart surgery.

Paul Charles Dominic Doherty is an English author, educator, lecturer and historian. He is also the Headmaster of Trinity Catholic High School in London, England. Doherty is a prolific writer, has produced dozens of historical novels and a number of nonfiction history books.

Anne Perry is an English author of historical detective fiction, best known for her Thomas Pitt and William Monk series. In 1954, at the age of fifteen, she was convicted in the murder of her friend's mother. She changed her name after serving a five-year sentence.

Edward Irving Wortis, better known by the pen name Avi, is an American author of young adult and children's literature. He is a winner of the Newbery Medal and twice one of the runners-up. 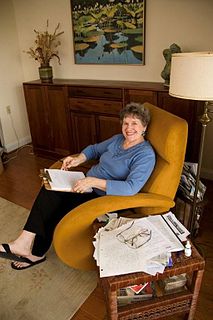 Hit Man: A Technical Manual for Independent Contractors is a book written under the pseudonym Rex Feral and was published by Paladin Press in 1983. Paladin Press owner Peder Lund claimed, in an interview with 60 Minutes, that the book started life as a detailed crime novel written by a Florida housewife, and that the format was later changed to appeal to Paladin's reader base accustomed to the publisher's non-fiction books on military, survivalist, weapons and similar topics. The book portrays itself as a how-to manual on starting a career as a hit man, fulfilling contracts. However, after a number of lawsuits claiming that the book was used as a handbook in several murders, the publication of the book was stopped. It marked "the first time in American publishing history that a publisher has been held liable for a crime committed by a reader."

Charlaine Harris Schulz is an American author who specializes in mysteries. She is best known for the adaptations of her series The Southern Vampire Mysteries, which was adapted as the TV series True Blood. The television show was a critical and financial success for HBO, running seven seasons, from 2008 through 2014. A number of her books have been bestsellers and this series was translated into multiple languages and published across the globe.

Kinn Hamilton McIntosh, known professionally as Catherine Aird, is English novelist. She is the author of more than twenty crime fiction novels and several collections of short stories. Her witty, literate, and deftly plotted novels straddle the "cozy" and "police procedural" genres and are somewhat similar in flavour to those of Martha Grimes, Caroline Graham, M C Beaton, Margaret Yorke, and Pauline Bell. She is a recipient of the Cartier Diamond Dagger award.

Pinky M. M. Bass is an American photographer, known for her work in pinhole photography.

Ralph Matthew McInerny was an American author and Professor of Philosophy at the University of Notre Dame. McInerny's most popular mystery book series featured Father Dowling. This character was the basis for the Father Dowling Mysteries television show, which ran from 1987 to 1991. 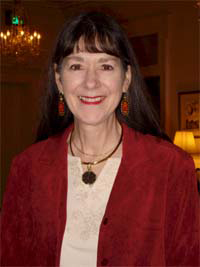 Carolyn Kreiter-Foronda was named Poet Laureate of Virginia by the Governor, Tim Kaine, on June 26, 2006. She succeeded Rita Dove and served in this position from June 2006 – July 2008. While serving as Poet Laureate, Carolyn started the "Poetry Book Giveaway Project" and added the "Poets Spotlight" to her webpage highlighting one poet from the Commonwealth each month, in addition to traveling widely to promote poetry in every corner of Virginia.

Barbara D'Amato is an American mystery author and winner of the Agatha and Anthony Award. She also features in Great Women Mystery Writers (2007).

Helen Norris Bell was an American novelist and short story author who was Poet Laureate of Alabama from 1999 to 2003. Although most of Norris' work can be considered southern literature she also wrote many stories set in many places around the world, often preferring to write what she imagined to what she knew.