Trevor Von Eeden (born July 24, 1959) [1] is a Guyanese-American comics artist, actor and writer known for his work on such titles as Black Lightning , Batman , Green Arrow , Power Man and Iron Fist , and the biographical series The Original Johnson.

Von Eeden was born in Guyana [1] and moved to New York City when he was 11 years old. [1] According to Von Eeden, he remembers drawing in his early teens in order to alleviate the boredom of junior high school, beginning with anatomical studies of faces and hands, which he says are the most difficult things to draw accurately. He was introduced to comics through the vast comic collection and encouragement of his best friend Al Simonson, who suggested to submit sample artwork to DC Comics. [2] Von Eeden's influences included Neal Adams, John Buscema, and Curt Swan. [3] He was also studying medicine at Columbia University. [3]

Trevor Von Eeden's comic book career began at age 16, when DC Comics editor Jack C. Harris hired him to illustrate prototype assignments with the "Legion of Super-Heroes" and Weird War Tales . [3] Soon after, Von Eeden was officially hired to design and draw the company's first African-American superhero to have his own title, Black Lightning. [4]

About three years later, Von Eeden began to suspect he had gotten that job because of his skin color, which displeased him and resulted in his writing what he called a five-page mission statement that said "in detail exactly what I wanted to create — the kind of style I thought would express myself most effectively, while also telling a story in the most dramatic way possible. I wrote everything down that I could think of — the details, form, and purpose of the style of art that I'd wanted to create." [2]

In 1977, he began drawing the "Green Arrow" backup feature in World's Finest Comics [5] and co-created the Count Vertigo character with Gerry Conway in World's Finest Comics #251 (July 1978). Von Eeden recalled in a 2011 interview that he "worked for Neal [Adams] concurrent with my DC tenure—starting in 1978, until somewhere in the late '90s". [6] He moved to Marvel Comics in 1979 and 1980 and pencilled Power Man and Iron Fist and Spider-Woman . [7] His stint at Marvel Comics was cut short because, in his own words, he was "fired by Jim Shooter, who’d told me specifically, when I’d first started there, to try and draw like Jack Kirby—and apparently wasn’t happy that I didn’t." [8] He then returned to DC and once again drew the "Green Arrow" feature in World's Finest Comics [5] and later in Detective Comics as well. [9] In collaboration with writer Mike W. Barr, he crafted Batman Annual #8 (1982) [10] and a Green Arrow miniseries. [11] Von Eeden has noted that the Batman Annual is "the book I’m most proud of, in my 25 year career at DC Comics. I was able to ink it myself, and also got my girlfriend at the time, Lynn Varley, to colour it – her first job in comics." [12] He and writer Jack C. Harris proposed to DC an all-female superteam named the Power Squad, but were turned down. [13] In 1983, Von Eeden and writer Robert Loren Fleming created the DC series Thriller , an action-adventure story that allowed him room to experiment. [14] [15] Von Eeden left the series as of its eighth issue due to difficulties with DC Comics' management. [16] He stated in a 2017 interview that he was "thrilled beyond measure" that Thriller is "the one job of my entire 41-year career that the fans have fondly and consistently remembered since it first appeared." [17]

He was asked by Frank Miller to draw the "Batman: Year One" storyline but did not accept the offer. [18]

"Venom", the fourth story arc in the Batman: Legends of the Dark Knight series, was drawn by Von Eeden, Russell Braun, and José Luis García-López. [7] [19] Von Eeden drew a Black Canary limited series (Nov. 1991-Feb. 1992) as well as an ongoing series featuring the character in 1992–1993. [7] In a 2009 interview he stated that ''Black Canary, on the other hand, was done in one state of mind, from beginning to end, one of semi-interest, to tell you the truth. I didn't, and still don't, find her to be a particularly interesting character." [20]

In 2007 Von Eeden began writing and drawing The Original Johnson, a biography of the boxer Jack Johnson. The 242-page graphic novel was serialized in weekly online installments at ComicMix, and was completed in 2009. [14] Print rights to the book were acquired by IDW Publishing, who issued the series as a two-volume set in 2010 and 2011. [1] He has called this project "The other 'most satisfying' book of my career (aside from the Batman Annual #8) is The Original Johnson – the first book I’ve ever written and drawn." [12]

He provided illustrations for the text story "The Holo-Marketeer" for Heavy Metal #v34 #9 (Jan. 2011) and designed and illustrated superhero comics produced for the National Hockey League by Stan Lee. [1] He later drew four issues of Gateway Comics' Stalker. [22]

Green Arrow is a fictional superhero who appears in American comic books published by DC Comics. Created by Mort Weisinger and designed by George Papp, he first appeared in More Fun Comics #73 in November 1941. His real name is Oliver Jonas Queen, a wealthy businessman and owner of Queen Consolidated who is also a well-known celebrity in Star City. He uses this position to hide the fact that he is the Arrow. Sometimes shown dressed like the character Robin Hood, Green Arrow is an archer who uses his skills to fight crime in his home cities of Star City and Seattle, as well as alongside his fellow superheroes as a member of the Justice League. Though much less frequently used in modern stories, he also deploys a range of trick arrows with various special functions, such as glue, explosive-tipped, grappling hook, flash grenade, tear gas and even kryptonite arrows for use in a range of special situations. At the time of his debut, Green Arrow functioned in many ways as an archery-themed analogue of the very popular character Batman.

Terry Kevin Austin is an American comics artist working primarily as an inker. 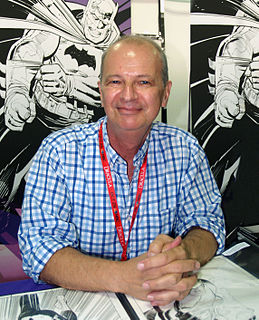 Klaus Janson is a German-born American comics artist, working regularly for Marvel Comics and DC Comics and sporadically for independent companies. While he is best known as an inker, Janson has frequently worked as a penciller and colorist.

Boleslav William Felix Robert Sienkiewicz is an American artist known for his work in comic books—particularly for Marvel Comics' New Mutants, Moon Knight, and Elektra: Assassin. Sienkiewicz's work in the 1980s was considered revolutionary in mainstream US comics due to his highly stylized art that verged on abstraction and made use of oil painting, photorealism, collage, mimeograph, and other forms generally uncommon in comic books. 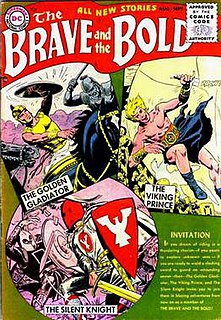 The Brave and the Bold is a comic book series published by DC Comics as an ongoing series from 1955 to 1983. It was followed by two mini-series in 1991 and 1999, and was revived as an ongoing title in 2007. The focus of the series has varied over time, but it most commonly features team-ups of characters from across the DC Universe. 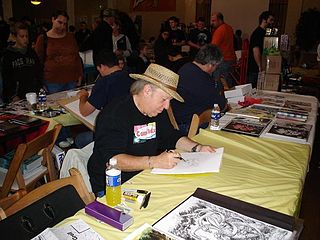 Mike Grell is an American comic book writer and artist, known for his work on books such as Green Lantern/Green Arrow, The Warlord, and Jon Sable Freelance.

Carmine Michael Infantino was an American comics artist and editor, primarily for DC Comics, during the late 1950s and early 1960s period known as the Silver Age of Comic Books. Among his character creations are the Black Canary and the Silver Age version of DC super-speedster the Flash with writer Robert Kanigher, the stretching Elongated Man with John Broome, Barbara Gordon the second Batgirl with writer Gardner Fox, Deadman with writer Arnold Drake, and Christopher Chance, the second iteration of the Human Target with Len Wein.

Mike W. Barr is an American writer of comic books, mystery novels, and science fiction novels. Barr has written for every one of the first four incarnations of Star Trek: Star Trek, Star Trek: The Next Generation, Star Trek: Deep Space Nine and Star Trek: Voyager, in either comic book or other media.

Lynn Varley is an American comic book colorist, notable for her collaborations with her then-husband, comic book writer/artist Frank Miller.

Joey Cavalieri is an American writer and editor of comic books. He is best known for his work on the characters Green Arrow and Huntress as well as the co-creation of Helena Bertinelli, the third Huntress, for DC Comics.

Denys B. Cowan is an American comics artist, television producer, media executive and one of the co-founders of Milestone Media.

Jack C. Harris is an American comic book writer and editor known mainly for his work in the 1970s and 1980s at DC Comics.

José Delbo is an Argentine comics artist. He is best known for his work on Wonder Woman for DC Comics and The Transformers for Marvel Comics.

Black Canary is a fictional superheroine appearing in American comic books published by DC Comics. Created by the writer-artist team of Robert Kanigher and Carmine Infantino, the character debuted in Flash Comics #86 as the first Black Canary in the Golden Age of Comic Books. Strong, mysterious, gutsy and romantic, she has been called "the archetype of the new Film Noir era heroine."