The Atlantic Coast Football League (ACFL) was a minor football league that operated from 1962 to 1973. Until 1969, many of its franchises had working agreements with NFL and AFL teams to serve as farm clubs. The league paid a base salary of $100 per game and had 36 players on each active roster. [1]

For the first few years, Joe Rosentover served as league president. He had served in the same capacity for the American Football League (formerly the American Association) from 1947 to 1950; a relative, John Rosentover, had run the league from 1936 to 1947. In fact, several of the teams from the AA were revived in the ACFL, including the Providence Steam Roller, Newark Bears and a team in Paterson, New Jersey. By 1968, Rosentover had left the organization and been superseded by commissioner Cosmo Iacavazzi.

In 1965, three of the franchises (the Hartford Charter Oaks, Newark Bears and Springfield Acorns) joined with five teams from the United Football League to create the Continental Football League. The league picked up four franchises from that league when it folded in 1969 (Norfolk Neptunes, Orlando Panthers, Jersey Jays and Indianapolis Capitols); the Neptunes and Panthers were exactly the same teams as the Acorns and Bears respectively, having relocated during their time in the CoFL.

In 1970, the Orlando Panthers signed a husband and wife duo, Steven and Patricia Palinkas, as a kicker and holder respectively. Steven did not make the team, but Patricia did, making her the first female professional football player. [1] Other notable ACFL players included Pro Bowl fullback Marvin Hubbard, league leading running back Mel Meeks, kicker Booth Lusteg, three-time championship winning quarterback Jim "The King" Corcoran, eventual 11-year NFL veteran Bob Tucker, and offensive lineman Paul "Dr. Z" Zimmermann, who shortly after his retirement began an over 40-year career as a sportswriter, much of that time with Sports Illustrated . Hall of Fame running back Steve Van Buren coached in the league from its launch through 1966. One of the most unique players in league history was DB Kiyo "Doc" Tashiro, a practicing doctor and Harvard alum, [2] who was the oldest player to play in a pro football league when he retired after 1964 season at the age of 47 (his record was later broke by George Blanda in 1975). He played for Newark Bears and Mohawk Valley Falcons from 1962 to 1964. [3]

Most of the ACFL's teams, including all of the teams that had been in the Continental league, folded following the 1971 season. The Hartford Knights and Bridgeport Jets survived, and both moved down to the Seaboard Football League in 1972. Hartford accrued a perfect season in that league in 1972, including several games with margins of victory over 40 points, and after much dissatisfaction with the league announced it was leaving with the intent to reform the ACFL. [4] The ACFL returned for one final season in 1973 with Hartford, Bridgeport, and several teams promoted up from the SFL (which led to a trickle-up that brought Empire Football League teams upward to the SFL to fill the old SFL teams' void). The return, however, was short-lived; the league determined it would not compete with the World Football League and folded after the 1973 season. 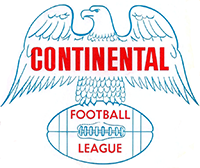 Robert Louis Tucker is a former professional American football player in the National Football League (NFL). A 6'3", 230 lbs. tight end from Bloomsburg University, Tucker played for 11 seasons in the NFL, from 1970 to 1980, for the New York Giants and the Minnesota Vikings.

Allan Wade Key is a former professional American football guard and offensive tackle in the National Football League who played ten seasons for the Philadelphia Eagles from 1970–1979. After playing college football for Southwest Texas State University, he was drafted in the 13th round of the 1969 NFL Draft by the Eagles. He was named to the Eagles' 75th Anniversary Team in 2007.

James Sean Patrick "King" Corcoran was an American football quarterback who had a ten-year career as a journeyman in the Atlantic Coast Football League, Seaboard Football League, World Football League, and briefly in the American Football League. Corcoran played college football, mostly as a back-up, for the Maryland Terrapins. He gained notoriety for his flamboyant dress and playboy lifestyle, which earned him the reputation of being a "poor man's Joe Namath".

The Orlando Panthers were a professional American football team based in Orlando, Florida. Founded in 1958 as the Franklin Miners, the team spent its first four years in the Eastern Football Conference, then three further years in the Atlantic Coast Football League before moving to the Continental Football League in 1965. The franchise moved from Newark, New Jersey to Orlando in 1966 and found success on the field as the Panthers. However, while the team won the COFL championship twice they were plagued by financial difficulties. The team jumped back to the ACFL in 1970 but were suspended by the league after the season.

The Seaboard Football League was a minor American football league that operated from 1971 to 1974. It folded during the 1974 season as a result of the founding of the World Football League, which deprived the league of talent.

This is a list of high school athletic conferences in the East and Southeast Regions of Ohio, as defined by the OHSAA. Because the names of localities and their corresponding high schools do not always match and because there is often a possibility of ambiguity with respect to either the name of a locality or the name of a high school, the following table gives both in every case, with the locality name first, in plain type, and the high school name second in boldface type. The school's team nickname is given last.

Win Headley is a former American football offensive guard who played one season with the Montreal Alouettes of the Canadian Football League (CFL). He was drafted by the Green Bay Packers of the National Football League (NFL) in the eighth round of the 1971 NFL Draft. He played college football at Wake Forest University and attended Staples High School in Westport, Connecticut. Headley was also a member of the Hartford Knights of the Atlantic Coast Football League (ACFL).

Mel Meeks was a professional American football running back.

The Hartford Charter Oaks were a professional American football team based in Hartford, Connecticut. They began play in 1964 as a member of the Atlantic Coast Football League, replacing the Ansonia Black Knights. In 1965 the Charter Oaks were one of several ACFL franchises to join the new Continental Football League, where they finished in last place in their division.

The Jersey Jays were a professional American football team based in Jersey City, New Jersey. They began play in 1969 as a member of the Continental Football League, and were a farm team of the NFL's Cleveland Browns. The Jays played their home games in Newark Schools Stadium in 1969.

The Bridgeport Jets were a minor league American football team based in Bridgeport, Connecticut. They began play in the Atlantic Coast Football League in 1966 as the Waterbury Orbits. The Orbits, already officially affiliated with the New York Jets of the American Football League, became the Bridgeport Jets in 1968. After relocating from Waterbury, the Jets played their homes games in John F. Kennedy Stadium.

The Ansonia Black Knights were a minor league American football team based in Ansonia, Connecticut. They began play in the Atlantic Coast Football League in 1962 and played their home games at Nolan Field. The team finished fourth out of six teams during the ACFL's inaugural season. Their head coach was Gene Casey, formerly a line coach with the University of Illinois and an assistant coach with Southern Connecticut State College.