Aviation Week & Space Technology, often abbreviated Aviation Week or AW&ST, is the flagship magazine of the Aviation Week Network. The weekly magazine is available in print and online, reporting on the aerospace, defense and aviation industries, with a core focus on aerospace technology. It has a reputation for its contacts inside the United States military and industry organizations. [1]

The publication is sometimes informally called "Aviation Leak and Space Mythology" in defense circles.[ why? ] [2]

Once a month the magazine publishes an edition targeted at the maintenance, repair and overhaul business.

Aviation Week & Space Technology is published by Aviation Week Network, a division of Informa. The magazine is headquartered in New York and its main editorial office is in Washington, DC.

The 1 December 1958 issue of Aviation Week included an article, "Soviets Flight Testing Nuclear Bomber", that claimed that the Soviets had made great progress in their own nuclear aircraft program. [3] This was accompanied by an editorial on the topic as well. The magazine claimed that the aircraft was real beyond a doubt, stating that "A nuclear-powered bomber is being flight tested in the Soviet Union. ... It has been observed both in flight and on the ground by a wide variety of foreign observers from Communist and non-Communist countries." In reality, however, the article was a hoax. [4] The aircraft in the photographs was later revealed to be an M-50 bomber and not a nuclear-powered plane at all.

After finding a December 1976 Titan IIID launch was for a secret KH-11 spy satellite, Aviation Week & Space Technology editor Craig Covault agreed with the Chairman of the Joint Chiefs of Staff, Gen. David C. Jones to hold on the story, but received details on the Buran programme which were published on March 20, 1978. It revealed progressively the KeyHole Story after William Kampiles sold the KH-11 manual to a Soviet spy. [5]

The SR-72 [6] is the proposed successor to the SR-71 Blackbird. There were unconfirmed rumors about the SR-72 dating back to 2007, when various sources disclosed that Lockheed Martin was developing a Mach 6 plane for the US Air Force. Such a development was confirmed on 1 November 2013, when the Skunk Works revelations were published about the development work on the SR-72 exclusively in Aviation Week & Space Technology. [7] The magazine dubbed it 'The Son of Blackbird'. Public attention to the news was large enough to overwhelm the Aviation Week servers. [8]

In a December 9, 2013 cover story, Aviation Week & Space Technology revealed [9] details about a highly classified intelligence, surveillance and reconnaissance stealth unmanned aircraft – the RQ-180 – that has been developed in secret by Northrop Grumman. The aircraft is currently flying at Area 51 in the Nevada desert and will become operational by 2015. [10]

On its January 16, 2015 cover, Aviation Week & Space Technology named Russian President Vladimir Putin "The Notorious Mr. Putin - Person Of The Year." On its website, the magazine said [13] that "no other person has had a more sweeping impact on aerospace and aviation—for better or worse—than Russian President Vladimir Putin. And for all but the most cynical of observers, Putin’s far-reaching impact has definitely been for the worse. Because of this, he is Aviation Week's 2014 Person of the Year." The controversial issue caused a backlash among readers on its comments section and on social media, with some threatening to burn the print issue in protest.

The editors-in-chief of Aviation Week & Space Technology (and its past titles) have been: 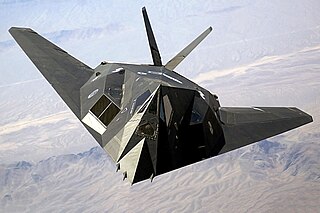 The Lockheed F-117 Nighthawk is a retired American single-seat, twin-engine stealth attack aircraft that was developed by Lockheed's secretive Skunk Works division and operated by the United States Air Force (USAF). The F-117 was based on the Have Blue technology demonstrator. 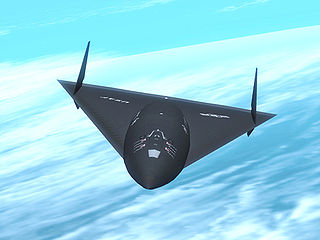 Aurora was a rumored mid-1980s American reconnaissance aircraft. There is no substantial evidence that it was ever built or flown and it has been termed a myth. 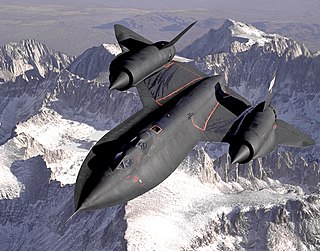 The Lockheed SR-71 "Blackbird" is a long-range, high-altitude, Mach 3+ strategic reconnaissance aircraft that was operated by the United States Air Force. It was developed as a black project from the Lockheed A-12 reconnaissance aircraft in the 1960s by Lockheed and its Skunk Works division. American aerospace engineer Clarence "Kelly" Johnson was responsible for many of the design's innovative concepts. During aerial reconnaissance missions, the SR-71 operated at high speeds and altitudes to allow it to outrace threats. If a surface-to-air missile launch were detected, the standard evasive action was simply to accelerate and outfly the missile. The shape of the SR-71 was based on the A-12 which was one of the first aircraft to be designed with a reduced radar cross-section. 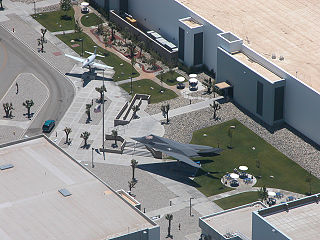 Skunk Works is an official pseudonym for Lockheed Martin's Advanced Development Programs (ADP), formerly called Lockheed Advanced Development Projects. It is responsible for a number of aircraft designs, including the U-2, the Lockheed SR-71 Blackbird, the Lockheed F-117 Nighthawk, Lockheed Martin F-22 Raptor, and the Lockheed Martin F-35 Lightning II, which are used in the air forces of several countries. Its name was taken from the moonshine factory in the comic strip Li'l Abner. The designation "skunk works" or "skunkworks" is widely used in business, engineering, and technical fields to describe a group within an organization given a high degree of autonomy and unhampered by bureaucracy, with the task of working on advanced or secret projects.

Stealth technology, also termed low observable technology, is a sub-discipline of military tactics and passive and active electronic countermeasures, which covers a range of methods used to make personnel, aircraft, ships, submarines, missiles, satellites, and ground vehicles less visible to radar, infrared, sonar and other detection methods. It corresponds to military camouflage for these parts of the electromagnetic spectrum.

Stealth aircraft are designed to avoid detection using a variety of technologies that reduce reflection/emission of radar, infrared, visible light, radio frequency (RF) spectrum, and audio, collectively known as stealth technology. F-117 Nighthawk is the first operational aircraft specifically designed around stealth technology. Other examples of stealth aircraft include the B-2 Spirit, the F-22 Raptor, the F-35 Lightning II, the Chengdu J-20, and the Sukhoi Su-57.

Nuclear propulsion includes a wide variety of propulsion methods that use some form of nuclear reaction as their primary power source. The idea of using nuclear material for propulsion dates back to the beginning of the 20th century. In 1903 it was hypothesized that radioactive material, radium, might be a suitable fuel for engines to propel cars and boats. H. G. Wells picked up this idea in his 1914 fiction work The World Set Free.

A black project is a term used for a highly classified military or defense project publicly unacknowledged by government, military personnel, and contractors. Examples of United States military aircraft developed as black projects include the F-117 Nighthawk stealth attack aircraft and the B-2 Spirit stealth bomber, both of which were highly classified and denied as existing until ready to be announced to the public. In the United States, the formal term for a black project is Special access program (SAP). The money that funds these projects is referred to as the black budget.

Benjamin Robert Rich was an American engineer and the second Director of Lockheed's Skunk Works from 1975 to 1991, succeeding its founder, Kelly Johnson. Regarded as the "father of stealth", Rich was responsible for leading the development of the F-117, the first production stealth aircraft. He also worked on the F-104, U-2, A-12, SR-71, and F-22, among others. 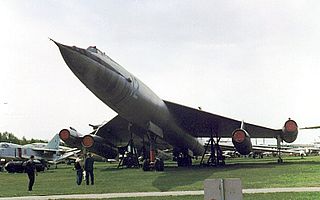 The Myasishchev M-50 is a Soviet prototype four-jet engine supersonic strategic bomber, which never attained service. Only one flightworthy prototype was built, which was first flown in October 1959. The M-50 was constructed by the Myasishchev design bureau. 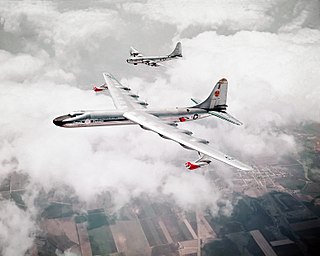 A nuclear-powered aircraft is a concept for an aircraft intended to be powered by nuclear energy. The intention was to produce a jet engine that would heat compressed air with heat from fission, instead of heat from burning fuel. During the Cold War, the United States and Soviet Union researched nuclear-powered bomber aircraft, the greater endurance of which could enhance nuclear deterrence, but neither country created any such operational aircraft.

Blackstar is the reported codename of a secret United States orbital spaceplane system. The possible existence of the Blackstar program was reported in March 2006 by Aviation Week & Space Technology magazine; the magazine reported that the program had been underway since at least the early 1990s, and that the impetus for Blackstar was to allow the United States government to retain orbital reconnaissance capabilities jeopardized following the 1986 Challenger disaster. The article also said that the United States Air Force's Space Command was unaware of Blackstar, suggesting it was operated by an intelligence agency such as the National Reconnaissance Office.

The Lockheed Senior Prom was a classified black program conducted by the United States Air Force in conjunction with the Lockheed Corporation's Skunk Works for the development and testing of a cruise missile using stealth technology. Based on the company's Have Blue demonstrator, the six Senior Prom vehicles proved successful in testing conducted at Area 51 in the late 1970s; despite this, the aircraft was not selected to enter production, and the program was terminated in the early 1980s.

This article is about the international Aerospace Journalist of the Year Awards, issued from 1996 to 2009-2010 by the World Leadership Forum, Ltd, of London, England, U.K., in conjunction with the Farnborough Air Show (England) and the Paris Air Show (France). 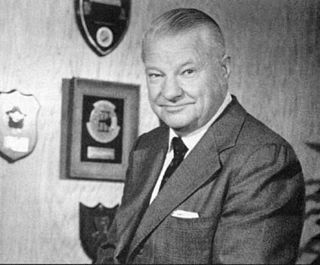 Clarence Leonard "Kelly" Johnson was an American aeronautical and systems engineer. He is recognized for his contributions to a series of important aircraft designs, most notably the Lockheed U-2 and SR-71 Blackbird. Besides the first production aircraft to exceed Mach 3, he also produced the first fighter capable of Mach 2, the United States' first operational jet fighter, as well as the first fighter to exceed 400 mph, and many other contributions to various aircraft. As a member and first team leader of the Lockheed Skunk Works, Johnson worked for more than four decades and is said to have been an "organizing genius". He played a leading role in the design of over forty aircraft, including several honored with the prestigious Collier Trophy, acquiring a reputation as one of the most talented and prolific aircraft design engineers in the history of aviation. In 2003, as part of its commemoration of the 100th anniversary of the Wright Brothers' flight, Aviation Week & Space Technology ranked Johnson eighth on its list of the top 100 "most important, most interesting, and most influential people" in the first century of aerospace. Hall Hibbard, Johnson's Lockheed boss, referring to Johnson's Swedish ancestry once remarked to Ben Rich: "That damned Swede can actually see air." 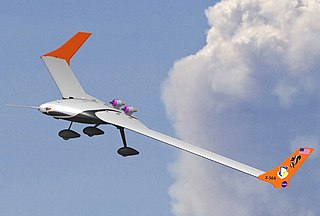 The Lockheed Martin X-56 is an American modular unmanned aerial vehicle that is being designed to explore High-Altitude Long Endurance (HALE) flight technologies for use in future military unmanned reconnaissance aircraft.

The Lockheed Martin X-59 QueSST is an American experimental supersonic aircraft being developed at Skunk Works for NASA's Low-Boom Flight Demonstrator program. Preliminary design started in February 2016, with the X-59 scheduled for delivery in late 2021 for flight tests from 2022. It is expected to cruise at Mach 1.42 and 55,000 ft (16,800 m), creating a low 75 Perceived Level decibel (PLdB) thump to evaluate supersonic transport acceptability.