The Barre Montpelier Times Argus is a daily morning newspaper serving the capital region of Vermont. It was established in 1897. The newspaper claims that "80% of all adults in the Barre/Montpelier area read the Times Argus for local news, state government, sports, and advertising information."[ citation needed ].

The Times Argus is the product of a union of the Barre Daily Times and the Montpelier Evening Argus in 1959. [2] The Barre Times was founded by Frank E. Langley, a printer from Wilmot, New Hampshire. [3] Langley and his wife printed the paper out of their house, with a news policy of "Barre first and the rest of the world after." The first edition came out on March 16, 1897, and cost one cent. Langley's son remembered playing on the floor while Mrs. Langley set type in their Barre home.

In 1917, Langley encouraged his employees to become partners, and upon his death in 1938 six men became shareholders, including Alex Walker. Walker bought out his partners in 1958, and purchased the Montpelier Argus on August 29, 1959. The first Barre-Montpelier Times Argus was published on August 30, 1959.

The Montpelier Argus was struggling financially when it was purchased, working with an antiquated press and a dilapidated building (the Times Argus has a Montpelier office in the same building that once housed the Argus, at 112 Main Street in Montpelier. Currently the office houses the Vermont Press Bureau and the Montpelier reporter for the Times Argus).

Founded as the weekly Argus-Patriot in 1863 by Hiram Atkins, the Argus became a daily on October 30, 1897. The first edition cost one cent, and included this proposition: "...know how to make a newspaper, and one which will merit the name and prove a credit to the city of Montpelier." By then it was owned by Atkins' son Morris, who assumed ownership when his father died in 1893. Morris Atkins passed on the newspaper to his daughter Elaine in the 1940s. At that time, the newspaper had an all-female reporting staff due to World War II. One of those women, Doris Jones, started at the Argus in 1945 and was employed by the newspaper until 1995.

In 2015, R. John Mitchell turned over publishing duties of the Times Argus to Catherine Nelson who had been vice president and CEO of the paper. [5] R. John stayed connected to the newspaper by continuing to serve as the president and chairman of the board of directors while his son, Rob Mitchell, became editor-in-chief. [5]

The circulation area includes Washington, Orange, Lamoille, Addison, Caledonia, and parts of Chittenden, Franklin, Orleans and Windsor counties. The Barre Montpelier Times Argus is published Monday through Saturday with an expanded Sunday edition. A statement by the publisher on March 31, 2008 stated the newspaper had a daily circulation of 8,360.[ citation needed ]

Barre is the most populous city in Washington County, Vermont, United States. As of the 2010 census, the municipal population was 9,052. Popularly referred to as "Barre City", it is almost completely surrounded by "Barre Town", which is a separate municipality.

Jeff Danziger is a syndicated political cartoonist and author.

The Brattleboro Reformer is the third-largest daily newspaper in the U.S. state of Vermont. With a weekday circulation of just over 10,000, it is behind the Burlington Free Press and the Rutland Herald, respectively. It publishes six days a week, Monday through Saturday, with its Weekend Reformer having the largest readership; the offices of the paper are in Brattleboro, Vermont and it has a market penetration of 62.8 in its home zip code.

The Rutland Herald is the second largest daily newspaper in the U.S. state of Vermont. It is published in Rutland. With a daily circulation of about 12,000, it is the main source of news geared towards the southern part of the state, along with the Brattleboro Reformer and the Bennington Banner. The Rutland Herald is the sister paper of the Barre Montpelier Times Argus. Its seven eras of ownership, much simplified, are sketched below

Jay H. Gordon was a Vermont Democratic politician who served as Auditor of Accounts from 1965 until 1969.

William T. "Bill" Doyle is a retired Vermont politician and was a Republican member of the Vermont Senate. As a senator from the Washington Vermont Senate District from 1969 to 2017, he is the longest-serving state legislator in Vermont history.

Michael J. Obuchowski is a former member of the Vermont House of Representatives. Elected at age 20 in 1972, he won reelection 19 times, serving continuously from January, 1973 until resigning in January, 2011 to accept appointment as Vermont's Buildings and General Services Commissioner. Obuchowski served as Speaker from 1995 to 2001.

Paul N. Poirier is a Vermont politician who served several terms in the Vermont House of Representatives.

The Sample News Group, LLC, is an American publisher of newspapers serving suburban and rural markets in Pennsylvania, New Jersey, Vermont, New York, and New Hampshire. The company is family owned and is structured as a Pennsylvania limited liability corporation and is headquartered in Corry, Pennsylvania.

David Moats is an American editorialist, known for winning a Pulitzer Prize in 2001 for his series of 10 editorials on issues revolving around civil unions for same-sex couples.

Horace W. Bailey was a Vermont politician and government official. A Republican, he was most notable for his service as a member of the Vermont Senate from Orange County (1894-1896), a member of the Vermont House of Representatives from Newbury (1902-1904), and the United States Marshal for the District of Vermont from 1903 until his death.

John Robinson was a farmer, businessman, and politician from Vermont. A Democrat, he served as Sheriff of Bennington County and United States Marshal for the District of Vermont.

Fred A. Field was a businessman and public official from Vermont. Among the offices in which he served, Field was United States Marshal for the District of Vermont from 1898 to 1903. 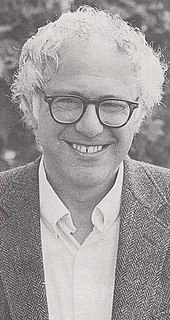 The mayoralty of Bernie Sanders lasted from April 6, 1981, to April 4, 1989, while he served as the 37th Mayor of Burlington, Vermont. Sanders' administration was the first socialist one in New England since the mayoralty of Jasper McLevy. He was regarded as a successful mayor that instituted multiple economic policies in Burlington, and was selected as one of the twenty best mayors in the United States by U.S. News & World Report in 1987. He was active in foreign affairs, primarily in Latin America in which he criticized the policy of the United States and visited Cuba, Nicaragua, and the Soviet Union, and was criticized for it by his opponents.