Quarks carry not only electric charge, but also charges such as color charge and weak isospin. Because of a phenomenon known as color confinement , a hadron cannot have a net color charge; that is, the total color charge of a particle has to be zero ("white"). A quark can have one of three "colors", dubbed "red", "green", and "blue"; while an antiquark may be either "anti-red", "anti-green" or "anti-blue".

For normal hadrons, a white color can thus be achieved in one of three ways:

The baryon number was defined long before the quark model was established, so rather than changing the definitions, particle physicists simply gave quarks one third the baryon number. Nowadays it might be more accurate to speak of the conservation of quark number.

In theory, exotic hadrons can be formed by adding pairs of quarks and antiquarks, provided that each pair has a matching color/anticolor. For example, a pentaquark (four quarks, one antiquark) could have the individual quark colors: red, green, blue, blue, and antiblue. In 2015, the LHCb collaboration at CERN reported results consistent with pentaquark states in the decay of bottom Lambda baryons (Λ0
b). [1]

Particles not formed of quarks

Particles without any quarks have a baryon number of zero. Such particles are

The baryon number is conserved in all the interactions of the Standard Model, with one possible exception. 'Conserved' means that the sum of the baryon number of all incoming particles is the same as the sum of the baryon numbers of all particles resulting from the reaction. The one exception is the hypothesized Adler–Bell–Jackiw anomaly in electroweak interactions; [2] however, sphalerons are not all that common and could occur at high energy and temperature levels and can explain electroweak baryogenesis and leptogenesis. Electroweak sphalerons can only change the baryon and/or lepton number by 3 or multiples of 3 (collision of three baryons into three leptons/antileptons and vice versa). No experimental evidence of sphalerons has yet been observed.

The hypothetical concepts of grand unified theory (GUT) models and supersymmetry allows for the changing of a baryon into leptons and antiquarks (see B − L), thus violating the conservation of both baryon and lepton numbers. [3] Proton decay would be an example of such a process taking place, but has never been observed.

In particle physics, a baryon is a type of composite subatomic particle which contains an odd number of valence quarks. Baryons belong to the hadron family of particles; hadrons are composed of quarks. Baryons are also classified as fermions because they have half-integer spin. 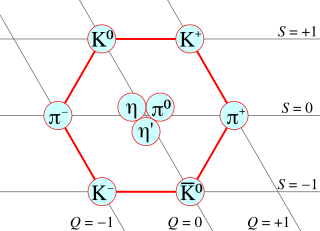 In particle physics, mesons are hadronic subatomic particles composed of an equal number of quarks and antiquarks, usually one of each, bound together by strong interactions. Because mesons are composed of quark subparticles, they have a meaningful physical size, a diameter of roughly one femtometer (1×10−15 m), which is about 1.2 times the size of a proton or neutron. All mesons are unstable, with the longest-lived lasting for only a few hundredths of a microsecond. Heavier mesons decay to lighter mesons and ultimately to stable electrons, neutrinos and photons. 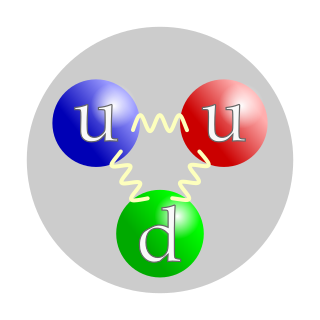 In physical sciences, subatomic particles are smaller than atoms. They can be composite particles, such as the neutron and proton; or elementary particles, which according to the standard model are not made of other particles. Particle physics and nuclear physics study these particles and how they interact. The concept of a subatomic particle was refined when experiments showed that light could behave like a stream of particles as well as exhibiting wave-like properties. This led to the concept of sub atomic particles to reflect that quantum-scale particles behave like both particles and waves. Another concept, the uncertainty principle, states that some of their properties taken together, such as their simultaneous position and momentum, cannot be measured exactly. The wave–particle duality has been shown to apply not only to photons but to more massive particles as well. 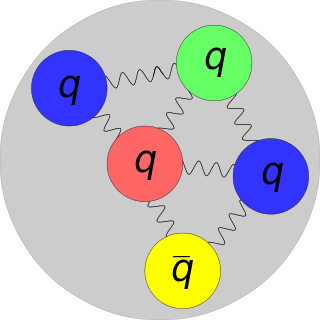 A pentaquark is a subatomic particle consisting of four quarks and one antiquark bound together. 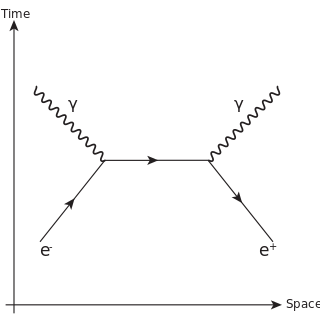 The W and Z bosons are together known as the weak or more generally as the intermediate vector bosons. These elementary particles mediate the weak interaction; the respective symbols are
W+
,
W−
, and
Z0
. The
W±
bosons have either a positive or negative electric charge of 1 elementary charge and are each other's antiparticles. The
Z0
boson is electrically neutral and is its own antiparticle. The three particles have a spin of 1. The
W±
bosons have a magnetic moment, but the
Z0
has none. All three of these particles are very short-lived, with a half-life of about 3×10−25 s. Their experimental discovery was pivotal in establishing what is now called the Standard Model of particle physics.

In physical cosmology, baryogenesis is the physical process that is hypothesized to have taken place during the early universe to produce baryonic asymmetry, i.e. the imbalance of matter (baryons) and antimatter (antibaryons) in the observed universe. 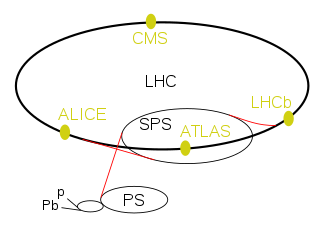 The LHCb experiment is one of eight particle physics detector experiments collecting data at the Large Hadron Collider at CERN. LHCb is a specialized b-physics experiment, designed primarily to measure the parameters of CP violation in the interactions of b-hadrons. Such studies can help to explain the matter-antimatter asymmetry of the Universe. The detector is also able to perform measurements of production cross sections, exotic hadron spectroscopy, charm physics and electroweak physics in the forward region. The LHCb collaboration, who built, operate and analyse data from the experiment, is composed of approximately 1260 people from 74 scientific institutes, representing 16 countries. Chris Parkes succeeded on July 1, 2020 as spokesperson for the collaboration to Giovanni Passaleva. The experiment is located at point 8 on the LHC tunnel close to Ferney-Voltaire, France just over the border from Geneva. The (small) MoEDAL experiment shares the same cavern.

In the Standard Model of electroweak interactions of particle physics, the weak hypercharge is a quantum number relating the electric charge and the third component of weak isospin. It is frequently denoted YW and corresponds to the gauge symmetry U(1).

Exotic hadrons are subatomic particles composed of quarks and gluons, but which - unlike "well-known" hadrons such as protons, neutrons and mesons - consist of more than three valence quarks. By contrast, "ordinary" hadrons contain just two or three quarks. Hadrons with explicit valence gluon content would also be considered exotic. In theory, there is no limit on the number of quarks in a hadron, as long as the hadron's color charge is white, or color-neutral. 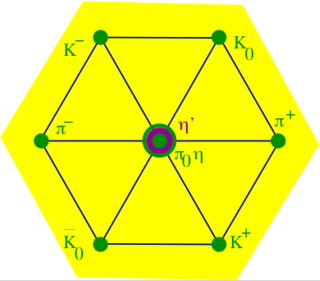 In particle physics, the quark model is a classification scheme for hadrons in terms of their valence quarks—the quarks and antiquarks which give rise to the quantum numbers of the hadrons. The quark model underlies "flavor SU(3)", or the Eightfold Way, the successful classification scheme organizing the large number of lighter hadrons that were being discovered starting in the 1950s and continuing through the 1960s. It received experimental verification beginning in the late 1960s and is a valid effective classification of them to date. The model was independently proposed by physicists Murray Gell-Mann, who dubbed them "quarks" in a concise paper, and George Zweig, who suggested "aces" in a longer manuscript. André Petermann also touched upon the central ideas from 1963 to 1965, without as much quantitative substantiation. Today, the model has essentially been absorbed as a component of the established quantum field theory of strong and electroweak particle interactions, dubbed the Standard Model.

In particle physics, the X and Y bosons are hypothetical elementary particles analogous to the W and Z bosons, but corresponding to a new type of force predicted by the Georgi–Glashow model, a grand unified theory.