A bell tent is a human shelter for inhabiting, traveling or leisure that has been used since 600AD [1] . The design is a simple structure, supported by a single central pole, covered with cotton canvas. The stability of the tent is reinforced with tension by guy ropes connected around the top of the walls and being held down by pegs around the circumference to the ground. It has a circular floor plan of some 10 ft and larger. The multiple sizes of bell tents can be suited to their use or preference and most have a spacious interior, with room to sleep a number of people.

Indigenous people from around the world have used canvas as a natural breathable material, with suitable properties for use in the elements. Canvas is durable and versatile. Today's modern canvas can be waterproof, mildew resistant, and flame retardant.

A version of the bell tent, the sibley tent was invented by Henry Hopkins Sibley, who had studied the Native American tipi during the expeditions he carried out in the American Old West. He patented his tent design in 1858.

The bell tent is characteristically differentiated from the sibley tent by its walls, raised larger entrance and guy ropes, without the extendable tripod or smoke hole, which were characteristics of the tipi. 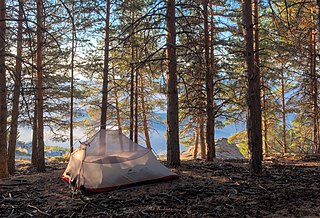 Camping is an outdoor activity involving overnight stays away from home in a shelter, such as a tent or a recreational vehicle. Typically participants leave developed areas to spend time outdoors in more natural ones in pursuit of activities providing them enjoyment. To be regarded as "camping" a minimum of one night is spent outdoors, distinguishing it from day-tripping, picnicking, and other similarly short-term recreational activities. Camping can be enjoyed through all four seasons.

A tent is a shelter consisting of sheets of fabric or other material draped over, attached to a frame of poles or attached to a supporting rope. While smaller tents may be free-standing or attached to the ground, large tents are usually anchored using guy ropes tied to stakes or tent pegs. First used as portable homes by nomads, tents are now more often used for recreational camping and as temporary shelters. 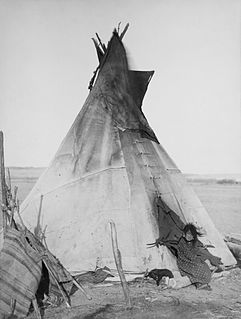 A tipi, also teepee and often called a lodge in older English writings, is a tent, traditionally made of animal skins upon wooden poles. Modern tipis usually have a canvas covering. A tipi is distinguished from other conical tents by the smoke flaps at the top of the structure. 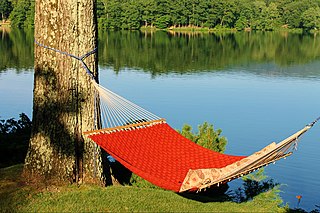 A hammock is a sling made of fabric, rope, or netting, suspended between two or more points, used for swinging, sleeping, or resting. It normally consists of one or more cloth panels, or a woven network of twine or thin rope stretched with ropes between two firm anchor points such as trees or posts. Hammocks were developed by native inhabitants of the Caribbean, Central America, and South America for sleeping, as well as the English. Later, they were used aboard ships by sailors to enable comfort and maximize available space, and by explorers or soldiers travelling in wooded regions. Eventually, in the 1920s, parents throughout North America used fabric hammocks to contain babies just learning to crawl. Today they are popular around the world for relaxation; they are also used as a lightweight bed on camping trips. The hammock is often seen as a symbol of summer, leisure, relaxation and simple, easy living.

A traditional yurt or ger (Mongolian) is a portable, round tent covered with skins or felt and used as a dwelling by several distinct nomadic groups in the steppes of Central Asia. The structure consists of an angled assembly or latticework of wood or bamboo for walls, a door frame, ribs, and a wheel possibly steam-bent. The roof structure is often self-supporting, but large yurts may have interior posts supporting the crown. The top of the wall of self-supporting yurts is prevented from spreading by means of a tension band which opposes the force of the roof ribs. Modern yurts may be permanently built on a wooden platform; they may use modern materials such as steam-bent wooden framing or metal framing, canvas or tarpaulin, Plexiglas dome, wire rope, or radiant insulation. 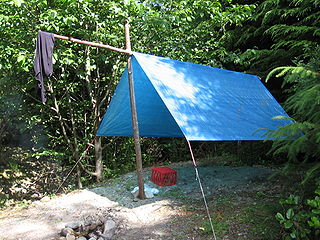 A tarpaulin or tarp, is a large sheet of strong, flexible, water-resistant or waterproof material, often cloth such as canvas or polyester coated with polyurethane, or made of plastics such as polyethylene. In some places such as Australia, and in military slang, a tarp may be known as a hootch. Tarpaulins often have reinforced grommets at the corners and along the sides to form attachment points for rope, allowing them to be tied down or suspended. 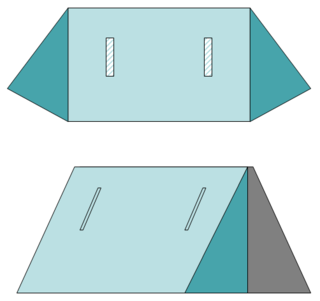 A shelter-half is a simple kind of partial tent designed to provide temporary shelter and concealment when combined with one or more sections. Two sheets of canvas or a similar material are fastened together with snaps, straps or buttons to form a larger surface. The shelter-half is then erected using poles, ropes, pegs, and whatever tools are on hand, forming an inverted V structure. Small tents like these are often called pup tents in American English.

An awning or overhang is a secondary covering attached to the exterior wall of a building. It is typically composed of canvas woven of acrylic, cotton or polyester yarn, or vinyl laminated to polyester fabric that is stretched tightly over a light structure of aluminium, iron or steel, possibly wood or transparent material. The configuration of this structure is something of a truss, space frame or planar frame. Awnings are also often constructed of aluminium understucture with aluminium sheeting. These aluminium awnings are often used when a fabric awning is not a practical application where snow load as well as wind loads may be a factor.

Lavvu is a temporary dwelling used by the Sami people of northern extremes of Northern Europe. It has a design similar to a Native American tipi but is less vertical and more stable in high winds. It enables the indigenous cultures of the treeless plains of northern Scandinavia and the high arctic of Eurasia to follow their reindeer herds. It is still used as a temporary shelter by the Sami, and increasingly by other people for camping. It should not be confused with the goahti, another type of Sami dwelling, or the Finnish laavu.

Camp Manitou-Lin is located in Middleville, Michigan, United States, approximately 30 miles south of Grand Rapids. Operated by the YMCA, it was founded in 1913 as a summer camp on the shores of Old Lake Barlow. The camp is at least 160 acres (0.65 km2). There are two main parts of camp - Day Camp and Main Camp - that are separated by Briggs Road. 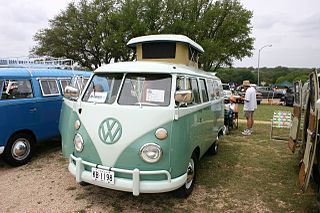 The Sibley tent was invented by the American military officer Henry Hopkins Sibley and patented in 1856. Of conical design, it stands about 12 feet (3.7 m) high and 18 feet (5.5 m) in diameter. It can comfortably house about a dozen men.

A chum is a temporary dwelling used by the nomadic Uralic reindeer herders of northwestern Siberia of Russia. The Evenks, Tungusic peoples, tribes, in Russia, Mongolia and China also use chums. They are also used by the southernmost reindeer herders, of the Todzha region of the Republic of Tyva and their cross-border relatives in northern Mongolia. It has a design similar to a Native American tipi but some versions are less vertical. It is very closely related to the Sami lavvu in construction, but is somewhat larger in size. Some chums can be up to thirty feet in diameter.

Originally, half of a Finnish conical tent called a laavu, the contemporary loue, redesigned by Vihe Vaellus, is an ultra-light Finnish open tent-like shelter. It is used to give reasonable protection from wind and rain during a variety of outdoor adventures, including camping, canoeing, hiking and hunting. Loues are popular with Scout groups and minimalist campers. Suitable as one or two person shelters, they are compact, light and can be set up and taken down in a basic way fairly quickly. The workman-like sets shown in photographs indicate that more effort can be made to stiffen the sides and the stakes and lines used can complicate a taut setup. The open front permits fire viewing, ventilation and looking out over a scenic view. A loue consists of a roughly conical section of fabric with the semi-circular bottom edge grounded by stakes and the tip raised with a single pole. Suitable standing tree trunks may be used to suspend the tent if an open campfire is not to be used. This style of ''tarp tent" can best be raised using a scissors-pole assembly. A pole suspension system allows for positioning an open fire in front of the shelter without the risk of damaging tree trunks or roots. The panels of a true Finnish loue are designed to provide a semi-circular short wall around the shelter and a triangular piece at the tip can be let down to provide a little more shelter in front. With suitable siting and careful staking and tensioning, the side walls can be set close to the ground, providing protection from drafts and lifting from winds.

The Kohte[ˈkoːtə] is the typical tent of German Scouting and the German Youth Movement. It has several unusual features, including its distinctive black colour and its design to allow a central fire.

A pole marquee or pole tent is a variety of large tent often used to shelter summer events such as shows, festivals, and weddings. They are particularly associated with typical English country garden weddings and village fetes.

A Truck tent is a tent designed to be set up in the bed of a pickup truck. It was invented in 1990 by Roman Napieraj, founder of Napier Enterprises.

Glamping is a portmanteau of "glamorous" and "camping", and describes a style of camping with amenities and, in some cases, resort-style services not usually associated with "traditional" camping. Glamping has become particularly popular with 21st-century tourists seeking the luxuries of hotel accommodation alongside "the escapism and adventure recreation of camping".

A tree tent is a camping tent designed to be set above the ground, usually attached to or supported by the neighboring trees. Like a tent, it must be a complete enclosure that can house a camper and his or her gear while suspended off the ground. Like tree houses, a tree tent may be accessed via a rope ladder and provide a sheltered environment for recreation and various outdoor activities. The portable nature of this type of shelter provides for more versatile location choice than a conventional tree house or a camping tent. 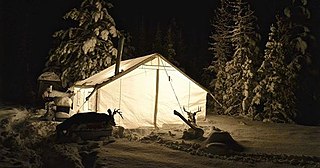 A wall tent, also known as an outfitter tent, safari tent, or sheep herder tent is a type of tent that has four straight vertical walls that provide more headroom than traditional pyramid-shaped tents. Wall tents are typically made of a heavy canvas and are used by hunters because they can accommodate several people and their supplies. Wall tents are suitable as a four-season tent, as they are able to accommodate a wood stove. Wall tents are commonly used in Civil War reenactments, and, in recent years, have also become used for glamping. Frames may be either internal or external. Tents are light weight yet sturdy. They are easy to carry & not too difficult when comes to set up.