William Henry Duffy (born 12 May 1961) [1] is an English rock musician, best known as the guitarist of the band The Cult.

Duffy was born and grew up in Manchester. He has Irish and Jewish ancestry. [2] He began playing the guitar at the age of fourteen, being influenced by the music of Queen, Thin Lizzy, The Who, Aerosmith, Blue Öyster Cult, and the early work of Led Zeppelin. In the late 1970s he became involved in the punk movement, being influenced by the New York Dolls, The Stooges, Buzzcocks and The Sex Pistols, as well as AC/DC (which he views as a proto-Punk group). He started playing lead guitar with a number of different punk acts whilst still in school in the late 1970s, including the Studio Sweethearts. [3] In the Manchester scene he personally influenced Johnny Marr to start performing as a guitarist, and encouraged Morrissey to make his first foray as singer/frontman with a punk-rock act entitled The Nosebleeds.

After leaving school, Duffy left Manchester when the Studio Sweethearts moved to London, working for a period as a shop assistant at Johnsons in the King's Road, in Chelsea. The Studio Sweethearts subsequently broke up and Duffy began playing lead guitar part-time with the band entitled Theatre of Hate . Shortly after he met Ian Astbury, who was at that time the frontman/lead vocalist with the Southern Death Cult , who was sufficiently impressed with Duffy's talents that he quit the Southern Death Cult to start a new band with him called Death Cult . After releasing two singles, the band shortened its name to The Cult. In The Cult's debut single "Spiritwalker", Duffy created a distinctive flanged sound using an unfashionable at the time choice of guitar - a mid 1970s Gretsch White Falcon, which became his trademark sound and image. This was followed up the album titled "Love". It featured the hits "She Sells Sanctuary", "Rain" and "Revolution".

Duffy moved to Los Angeles in 1988 with Astbury, where both remain. There, the two writing partners (with longtime bassist Jamie Stewart) turned to stadium rock and recorded Sonic Temple . The Cult reached a larger, mainstream audience, but the public's attention could not be sustained with their next album, Ceremony , at the dawn of the grunge age.

Following the 'Ceremonial Stomp' tour of 1992, Astbury pressured Duffy to return to their roots, with The Cult's The Cult album. This would ultimately lead to Astbury's departure from Duffy and The Cult in 1995.

During The Cult's four-year hiatus, Duffy played with Mike Peters of The Alarm in a project called Coloursound.

Duffy reformed The Cult with Astbury in 1999, which led to a new recording contract with Atlantic Records. This was capped off by a show at Atlanta's Music Midtown Festival in May 2001, where over 60,000 people watched them perform, leading up to the release of Beyond Good and Evil .

Their single to promote it, "Rise", which reached No. 125 in the US and No. 3 for 6 weeks on the mainstream rock chart, was removed from radio rotation a week after the album's release. Disappointing sales, reviews, and tour attendance ensued. In 2002 Astbury sent The Cult onto a hiatus once more, when he accepted an offer to sing with The Doors.

In early, 2004 Duffy formed the covers band Cardboard Vampyres alongside Alice in Chains guitarist/vocalist Jerry Cantrell. Also in the band were Mötley Crüe and Ratt vocalist John Corabi, The Cult bassist Chris Wyse and drummer Josh Howser. [4] The band played at various venues in the United States between 2004 and 2005. They predominately played along the West Coast. [5] No albums were released by the band.

The Cult reformed in early 2006 and after playing several US concerts toured Europe. Duffy appeared in Ethan Dettenmaier's film, Sin-Jin Smyth , which was filmed in 2006, but remains unreleased.

After the completion of the album, former Fuel member Brett Scallions was added as bassist so Morrison could focus on being the lead singer. Then Jeremy Colson, formerly with Steve Vai, was brought in to be the full-time drummer for the band. Duffy's involvement ended in 2007.

In 2010, Duffy appeared on the TV-series, Married to Rock , which starred his girlfriend AJ Celi. In October 2012, he performed with Sammy Hagar and Michael Anthony at the Cabo Wabo Cantina for Sammy Hagar's Birthday Bash in Cabo San Lucas, Mexico.

In an October 2016 interview with PopMatters journalist J.C. Maçek III, Duffy spoke about his favorite Cult song, saying "Jonesy [former Sex Pistols guitarist turned radio host Steve Jones] on Jonesy’s Jukebox just played 'Love' from the Love album and that's my favorite Cult song," he tells me proudly. "I actually got, I have to admit, a teeny bit of a goose bump because it just captured exactly what I wanted to say with that kind of haunting rock. Kind of swaggery but not heavy, it's got ... Duffy searches for the right words to express his emotion at hearing the song from the outside, "I mean nobody ... I don’t know who makes music like that!" [6]

The Cult are an English rock band formed in 1983 in Bradford, West Yorkshire. Before settling on their current name in January 1984, the band performed under the name Death Cult, which was an evolution of the name of lead singer Ian Astbury's previous band Southern Death Cult. They gained a dedicated following in the United Kingdom in the mid-1980s as a post-punk/gothic rock band, with singles such as "She Sells Sanctuary", before breaking into the mainstream in the United States in the late 1980s establishing themselves as a hard rock band with singles such as "Love Removal Machine". Since its initial formation in 1983, the band have had various line-ups; the longest-serving members are Astbury and guitarist Billy Duffy, who are also the band's two songwriters.

Southern Death Cult were a British post-punk/gothic rock band in the early 1980s. They are now primarily known for having given their lead singer and parts of the name to the multi-platinum hard rock band the Cult. Despite the similarities in the names, "Southern Death Cult" were distinct from "Death Cult"/"the Cult".

Ian Robert Astbury is an English singer and songwriter. He is best known as a founding member and lead vocalist for the rock band the Cult. 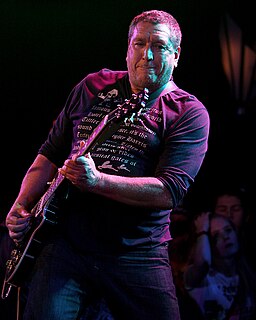 Stephen Philip Jones is an English rock guitarist, singer, actor and radio DJ, best known as a guitarist with the Sex Pistols. Following the split of the Sex Pistols, he formed the Professionals with former bandmate Paul Cook. He has also released two solo albums, and worked with the likes of Johnny Thunders, Iggy Pop, Bob Dylan and Thin Lizzy. In 1995, he formed the short-lived supergroup Neurotic Outsiders with members of Guns N' Roses and Duran Duran. Jones was ranked #97 in Rolling Stone's list of the "100 Greatest Guitarists of All Time," which was published in 2015. 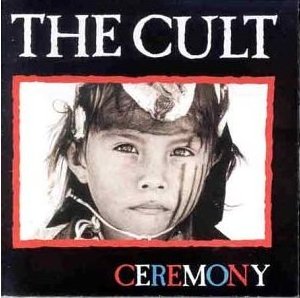 Ceremony is the fifth studio album by British rock band The Cult, first released on 23 September 1991. The most popular songs on the album are “Wild Hearted Son” and “Heart of Soul”. 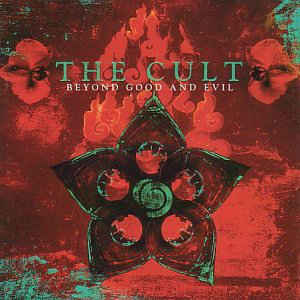 Beyond Good and Evil is the seventh studio album by English rock band The Cult. Released in 2001, it marked their first new recording in six and a half years. The record debuted at No. 37 on the charts in the United States, No. 22 in Canada, No. 25 in Spain.

John Corabi is an American hard rock singer and guitarist. He was the frontman of The Scream during 1989 and the frontman of Mötley Crüe between 1992 and 1996 during original frontman Vince Neil's hiatus from the band.

Death Cult is the debut four-track EP by the post punk/gothic rock band Death Cult. Released in July 1983 on the Situation Two label, the EP reached No. 2 on the UK Independent Chart. The EP is often erroneously referred to as Brothers Grimm.

James Stevenson is an English punk/alternative rock guitarist, at one time a member of the Alarm, Gene Loves Jezebel, Gen X, the Cult, Holy Holy, The International Swingers and Chelsea. 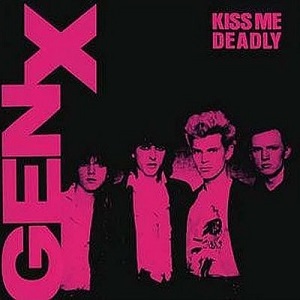 Kiss Me Deadly is the third studio album by the English punk rock and new wave band Gen X, produced by Keith Forsey it was issued in the United Kingdom on 23 January 1981. It was the final album to be released before their disbandment, though they would briefly reunite in 1993.

James Alec Stewart is a retired British musician who was the bassist of the post-punk/hard rock band The Cult. He recorded on The Cult's first four albums, Dreamtime, Love, Electric and Sonic Temple. 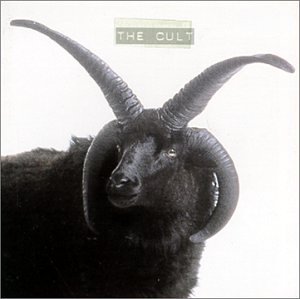 The Cult is the sixth studio album from English rock band, The Cult. It was released in October 1994 on Beggars Banquet Records and it is also the band's last album on Sire Records in the US. It is also commonly referred to as the "Black Sheep" record, due to the image of a Manx Loaghtan black sheep on the front cover. The record also features one of the very rare times when Ian Astbury and Billy Duffy have shared songwriting credit with anyone: bassist Craig Adams is credited as co-author of "Universal You". 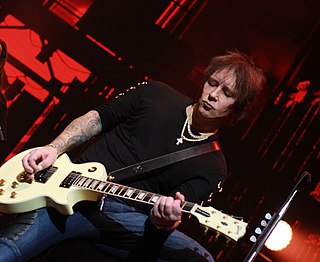 Billy Morrison is a British guitarist and singer who plays guitar with Billy Idol and performs with the Los Angeles-based cover band Royal Machines. Morrison previously played with Camp Freddy and fronted the hard rock act Circus Diablo. He has also been a member of The Cult. 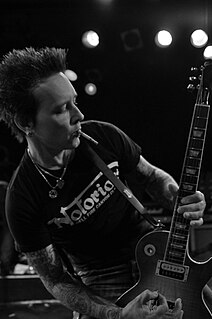 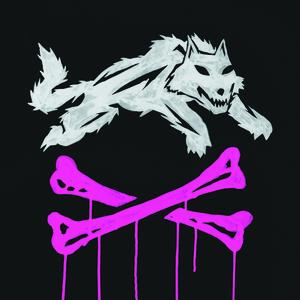 Born into This is The Cult's eighth studio album, and was released on October 2, 2007 in the US, Canada, South Africa, and Sweden. It was released in Hungary, Denmark, Spain and France on 1 October, and in Finland on the 3rd.

Johan Frandsen, is the frontman guitarist, main songwriter and lead vocalist in the Swedish rock band, The Knockouts. His trademark guitar] is a Gretsch White Falcon. Johan Frandsen is an endorsed artist by Gretsch Guitars, TV Jones, Fender and Peerless. 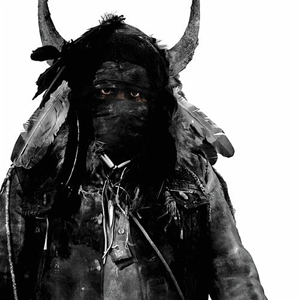 Choice of Weapon is the ninth album by the British rock band The Cult. The album was initially planned for release in 2011, but the release date was pushed back to 22 May 2012. Recording sessions for Choice of Weapon began in March 2011 with Chris Goss, who produced the 2010 Capsule EPs. The sessions took place at studios in New York City, Los Angeles, California, and the "California desert". The album was finished in January 2012. During the recording sessions, Bob Rock teamed up with The Cult for the first time since 2001's Beyond Good and Evil and co-produced Choice of Weapon. Choice of Weapon was named iTunes "Rock Album of the Year" in 2012.