Biological Abstracts is a database produced by Clarivate Analytics. It includes abstracts from peer-reviewed academic journal articles in the fields of biology, biochemistry, biotechnology, botany, pre-clinical and experimental medicine, pharmacology, zoology, agriculture, and veterinary medicine, and has been published since 1926. [1] [2]

It can be accessed through a number of services, including EBSCO, Ovid [3] and Web of Science. [1]

The service began as a print publication in 1926, when it was formed by the union of Abstracts of Bacteriology (1917–1925), and Botanical Abstracts (1919–1926), both published in Baltimore by Williams and Wilkins. [4] It was published in paperback subject sections, with abstracts usually written by scientists in the US, as a great many articles from that period were in other languages. At the time of founding, it was in competition with the classified indexing service of the Concilium Bibliographicum in Zurich. [5] [6] [7] [8]

The first online version was published on magnetic tape; it contained only the bibliographic information, not the text of the abstracts, and was intended as a rapid alerting service.[ definition needed ]

The Pioneer Venus Orbiter, also known as Pioneer Venus 1 or Pioneer 12, was a mission to Venus conducted by the United States as part of the Pioneer Venus project. Launched in May 1978 atop an Atlas-Centaur rocket, the spacecraft was inserted into an elliptical orbit around Venus on December 4, 1978. It returned data on Venus until October 1992. 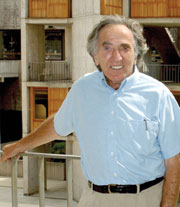 Leslie Eleazer Orgel FRS was a British chemist. He is known for his theories on the origin of life.

The Pioneer Venus Multiprobe, also known as Pioneer Venus 2 or Pioneer 13, was a spacecraft launched in 1978 to explore Venus as part of NASA's Pioneer program. This part of the mission included a spacecraft bus which was launched from Earth carrying one large and three smaller probes, which after separating penetrated the Venusian atmosphere at a different location, returning data as they descended into the planet's thick atmosphere. The entry occurred on December 9, 1978.

Nevil Vincent Sidgwick FRS was an English theoretical chemist who made significant contributions to the theory of valency and chemical bonding.

In chemistry, the study of sonochemistry is concerned with understanding the effect of ultrasound in forming acoustic cavitation in liquids, resulting in the initiation or enhancement of the chemical activity in the solution. Therefore, the chemical effects of ultrasound do not come from a direct interaction of the ultrasonic sound wave with the molecules in the solution.

Ferenc Krausz is a Hungarian-Austrian physicist, whose research team has generated and measured the first attosecond light pulse and used it for capturing electrons’ motion inside atoms, marking the birth of attophysics.

John James Stevenson was an American geologist, born in New York City. He graduated from New York University in 1863, became professor of chemistry at West Virginia University for two years (1869–71), then served as professor of geology at New York University until 1909. During 1873–74 and from 1878 to 1880 he was geologist for the United States Geological Survey. He also served on the Pennsylvania Geological Survey from 1875 to 1878 and from 1881 to 1882. He was president of the Geological Society of America in 1898.

Lubert Stryer is the Emeritus Mrs. George A. Winzer Professor of Cell Biology, at Stanford University School of Medicine. His research over more than four decades has been centered on the interplay of light and life. In 2007 he received the National Medal of Science from President Bush at a ceremony at the White House for elucidating the biochemical basis of signal amplification in vision, pioneering the development of high density microarrays for genetic analysis, and authoring the standard undergraduate biochemistry textbook, Biochemistry. It is now in its ninth edition and also edited by Jeremy Berg, John L. Tymoczko and Gregory J. Gatto, Jr.

Ravi Iyengar, is a principal investigator at The Mount Sinai Medical Center.

Xiaowei Zhuang is a Chinese-American biophysicist who is the David B. Arnold Jr. Professor of Science, Professor of Chemistry and Chemical Biology, and Professor of Physics at Harvard University, and an Investigator at the Howard Hughes Medical Institute. She is best known for her work in the development of Stochastic Optical Reconstruction Microscopy (STORM), a super-resolution fluorescence microscopy method, and the discoveries of novel cellular structures using STORM. She received a 2019 Breakthrough Prize in Life Sciences for developing super-resolution imaging techniques that get past the diffraction limits of traditional light microscopes, allowing scientists to visualize small structures within living cells. She was elected a Member of the American Philosophical Society in 2019 and was awarded a Vilcek Foundation Prize in Biomedical Science in 2020.

Martin David Burkenroad was an American marine biologist. He specialized in decapod crustaceans and fisheries science.

Jared Mason Diamond is an American scientist and author best known for his popular science books The Third Chimpanzee (1991), Guns, Germs, and Steel (1997), Collapse: How Societies Choose to Fail or Succeed (2005), and The World Until Yesterday (2012). Originally trained in physiology, Diamond's work is known for drawing from a variety of fields, and he is currently Professor of Geography at the University of California, Los Angeles. The Jared Diamond bibliography includes both his scientific and popular works.

Charles Reid Barnes (1858–1910) was an American botanist specializing in bryophytes. He was co-editor of the Botanical Gazette for over 25 years.

Extinct isotopes of superheavy elements are isotopes of elements whose half-lives were too short to have lasted through the formation of the Solar System and, because they are not replenished by natural processes, can nowadays only be found as their daughters trapped within sediment and meteorite samples dating billions of years ago.

Marie A. DiBerardino was an American biologist, specializing in developmental biology and genetics. She is known, with Robert William Briggs and Thomas Joseph King, as a pioneer in amphibian cloning.

Frank Caleb Gates was an American botanist and plant ecologist. He was the president of the Ecological Society of America (ESA) in 1952.