Magnetic tape is a medium for magnetic storage made of a thin, magnetizable coating on a long, narrow strip of plastic film. It was developed in Germany in 1928, based on magnetic wire recording. Devices that record and playback audio and video using magnetic tape are tape recorders and video tape recorders respectively.

Magnetic tape revolutionized sound recording and reproduction and broadcasting. It allowed radio, which had always been broadcast live, to be recorded for later or repeated airing. Since the early 1950s, magnetic tape has been used with computers to store large quantities of data and is still used for backup purposes.

Magnetic tape begins to degrade after 10–20 years and therefore is not an ideal medium for long-term archival storage. [1]

While good for short-term use, magnetic tape is highly prone to disintegration. Depending on the environment, this process may begin after 10–20 years. [1]

Over time, magnetic tape made in the 1970s and 1980s can suffer from a type of deterioration called sticky-shed syndrome. It is caused by hydrolysis of the binder in the tape and can render the tape unusable. [2]

Since the introduction of magnetic tape, other technologies have been developed that can perform the same functions, and therefore, replace it. Despite this, technological innovation continues. As of 2014 [update] Sony and IBM continue to advance tape capacity. [3]

Magnetic tape was invented for recording sound by Fritz Pfleumer in 1928 in Germany. [4]

Because of escalating political tensions and the outbreak of World War II, these developments in Germany were largely kept secret. Although the Allies knew from their monitoring of Nazi radio broadcasts that the Germans had some new form of recording technology, its nature was not discovered until the Allies acquired German recording equipment as they invaded Europe at the end of the war. [5] It was only after the war that Americans, particularly Jack Mullin, John Herbert Orr, and Richard H. Ranger, were able to bring this technology out of Germany and develop it into commercially viable formats. Bing Crosby, an early adopter of the technology, made a large investment in the tape hardware manufacturer Ampex. [6]

A wide variety of audiotape recorders and formats have been developed since. Some magnetic tape-based formats include:

Some magnetic tape-based formats include:

Magnetic tape was first used to record computer data in 1951 on the Eckert-Mauchly UNIVAC I. The system's UNISERVO I tape drive used a thin strip of one-half-inch (12.65  mm) wide metal, consisting of nickel-plated bronze (called Vicalloy). The recording density was 100 characters per inch (39.37  characters/cm) on eight tracks. [7]

In 2002, Imation received a US$11.9 million grant from the U.S. National Institute of Standards and Technology for research into increasing the data capacity of magnetic tape. [8] 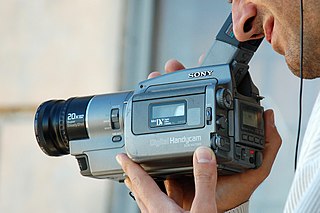 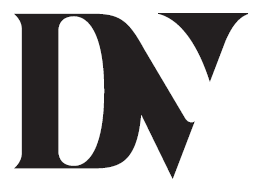 DV refers to a family of codecs and tape formats used for storing digital video, launched in 1995 by a consortium of video camera manufacturers led by Sony and Panasonic. In the late 1990s and early 2000s, DV was strongly associated with the transition from analog to digital desktop video production, and also with several enduring "prosumer" camera designs such as the Sony VX-1000. DV is sometimes referred to as MiniDV, which was the most popular tape format using a DV codec during this time. 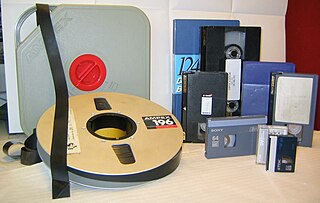 Videotape is magnetic tape used for storing video and usually sound in addition. Information stored can be in the form of either an analog or digital signal. Videotape is used in both video tape recorders (VTRs) and, more commonly, videocassette recorders (VCRs) and camcorders. Videotapes have also been used for storing scientific or medical data, such as the data produced by an electrocardiogram. 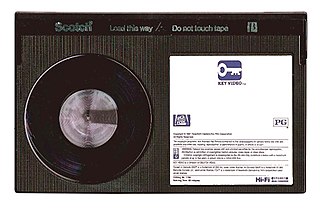 Betamax is a consumer-level analog recording and cassette format of magnetic tape for video, commonly known as a video cassette recorder. It was developed by Sony and was released in Japan on May 10, 1975, followed by the US in November of the same year. 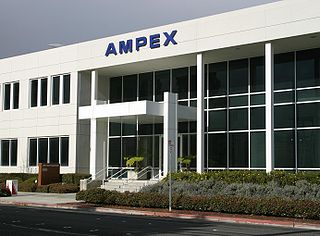 Ampex is an American electronics company founded in 1944 by Alexander M. Poniatoff as a spin-off of Dalmo-Victor. The name AMPEX is a portmanteau, created by its founder, which stands for Alexander M. Poniatoff Excellence. Today, Ampex operates as Ampex Data Systems Corporation, a subsidiary of Delta Information Systems, and consists of two business units. The Silicon Valley unit, known internally as Ampex Data Systems (ADS), manufactures digital data storage systems capable of functioning in harsh environments. The Colorado Springs, Colorado unit, referred to as Ampex Intelligent Systems (AIS), serves as a laboratory and hub for the company's line of industrial control systems, cyber security products and services and its artificial intelligence/machine learning technology. 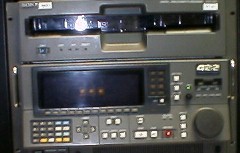 A video tape recorder (VTR) is a tape recorder designed to record and play back video and audio material from magnetic tape. The early VTRs were open-reel devices that record on individual reels of 2-inch-wide (5.08 cm) tape. They were used in television studios, serving as a replacement for motion picture film stock and making recording for television applications cheaper and quicker. Beginning in 1963, videotape machines made instant replay during televised sporting events possible. Improved formats, in which the tape was contained inside a videocassette, were introduced around 1969; the machines which play them are called videocassette recorders. 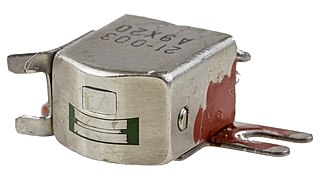 A tape head is a type of transducer used in tape recorders to convert electrical signals to magnetic fluctuations and vice versa. They can also be used to read credit/debit/gift cards because the strip of magnetic tape on the back of a credit card stores data the same way that other magnetic tapes do. Cassettes, reel-to-reel tapes, 8-tracks, VHS tapes, and even floppy disks and early hard drive disks all use the same principle of physics to store and read back information. The medium is magnetized in a pattern. It then moves at a constant speed over an electromagnet. Since the moving tape is carrying a changing magnetic field with it, it induces a varying voltage across the head. That voltage can then be amplified and connected to speakers in the case of audio, or measured and sorted into ones and zeroes in the case of digital data.

1–inch Type C is a professional reel-to-reel analog recording helical scan videotape format co-developed and introduced by Ampex and Sony in 1976. It became the replacement in the professional video and broadcast television industries for the then-incumbent 2–inch quadruplex videotape open-reel format. Additionally, it replaced the unsuccessful type A format, also invented by Ampex, and, primarily in mainland Europe, it supplemented the type B format, invented by the Fernseh division of Bosch, but it was replaced by type C format also there. 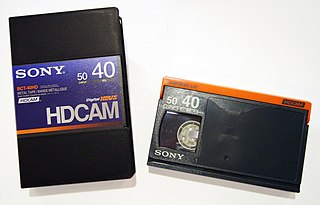 HDCAM is a high-definition video digital recording videocassette version of Digital Betacam introduced in 1997 that uses an 8-bit discrete cosine transform (DCT) compressed 3:1:1 recording, in 1080i-compatible down-sampled resolution of 1440×1080, and adding 24p and 23.976 progressive segmented frame (PsF) modes to later models. The HDCAM codec uses rectangular pixels and as such the recorded 1440×1080 content is upsampled to 1920×1080 on playback. The recorded video bit rate is 144 Mbit/s. Audio is also similar, with four channels of AES3 20-bit, 48 kHz digital audio. Like Betacam, HDCAM tapes were produced in small and large cassette sizes; the small cassette uses the same form factor as the original Betamax. The main competitor to HDCAM was the DVCPRO HD format offered by Panasonic, which uses a similar compression scheme and bit rates ranging from 40 Mbit/s to 100 Mbit/s depending on frame rate.

2-inch quadruplex videotape was the first practical and commercially successful analog recording video tape format. It was developed and released for the broadcast television industry in 1956 by Ampex, an American company based in Redwood City, California. The first videotape recorder using this format was built in the same year. This format revolutionized broadcast television operations and television production, since the only recording medium available to the TV industry until then was film used for kinescopes.

D-9 or Digital-S as it was originally known, is a professional digital video videocassette format created by JVC in 1995. 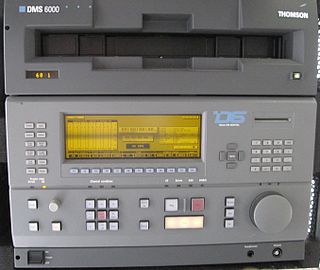 D6 HDTV VTR is SMPTE videocassette standard. A D6 VTR can record and playback HDTV video uncompressed. The only D6 VTR product is the Philips, now Thomson's Grass Valley's Media Recorder, model DCR 6024, also called the D6 Voodoo VTR. The VTR was a joint project between Philips Digital Video Systems of Germany and Toshiba in Japan. The tape deck module was designed and made by Philips in Weiterstadt, Germany, and the digital processor module designed and made by Toshiba. Since there is no data compression, after 20 tape copies of multi generations there is no noticeable loss of quality. As a very high-end, costly system about 70 were sold to high-end post houses from about 2000 to 2005. The VTR had a data record option. The data module could record and play back 2k DPX files at 6 frames per second over a HIPPI connection. The VTR came in a data only model, or with a switch module, so the record deck could be used for both video and data recording. The tape deck was also sold stand alone as a giga bit recorder to record and playback raw data. Toshiba made the video tape for the VTR. The high price of the video tape limited the use of the VTR.

Wikimedia Commons has media related to:
Tape (category)
This page is based on this Wikipedia article
Text is available under the CC BY-SA 4.0 license; additional terms may apply.
Images, videos and audio are available under their respective licenses.