A software effect processor is a computer program which is able to modify the signal coming from a digital audio source in real time.

The digital audio signal, whose origin may be analog (by conversion to digital) or be in an already digital source (such as an audio file, or a software synthesizer), is stored in temporary allotments of computer memory called buffers. Once there, the software effect processor modifies the signal according to a specific algorithm, which creates the desired effect. After this operation, the signal may be transformed from digital to analog and sent to an audible output, stored in digital form for later reproduction or editing, or sent to other software effect processors for additional processing.

The larger the buffer is, the more time it takes to play the audio data sent for playback. Large buffers increase the time required before the next buffer can be played, this delay is usually called latency. Every system has certain limitations - too small buffers involving negligible latencies cannot be smoothly processed by computer, so the reasonable size starts at about 32 samples. The processor load does not affect latency (it means, once you set certain buffer size, the latency is constant). But with very high processor loads, the buffer isn't filled with new sound in time for playback, and the sound dropps out. Increasing buffer size or quitting other applications helps to keep playback smooth.

The default Windows drivers are not optimized for low latency effect processing. As a solution, Audio Stream Input/Output (ASIO) was created. ASIO is supported by most professional music applications. Most sound cards directed at this market support ASIO. If the hardware manufacturer doesn't provide ASIO drivers, there are other ASIO free anternatives, which can be used for any audio interface. ASIO drivers can be emulated, in this case the driver name is ASIO Multimedia. However, the latency when using these drivers is very high.

All the Mac compatible hardware uses CoreAudio drivers, so the software effects processors can work with small latency and good performance. 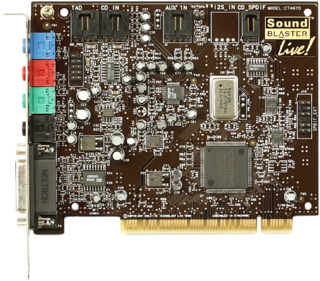 A software synthesizer, also known as a softsynth or software instrument, is a computer program or plug-in that generates digital audio, usually for music. Computer software that can create sounds or music is not new, but advances in processing speed now allow softsynths to accomplish the same tasks that previously required the dedicated hardware of a conventional synthesizer. Softsynths are usually cheaper and more portable than dedicated hardware, and easier to interface with other music software such as music sequencers.

Virtual Studio Technology (VST) is an audio plug-in software interface that integrates software synthesizer and effects in digital audio workstations. VST and similar technologies use digital signal processing to simulate traditional recording studio hardware in software. Thousands of plugins exist, both commercial and freeware, and many audio applications support VST under license from its creator, Steinberg. 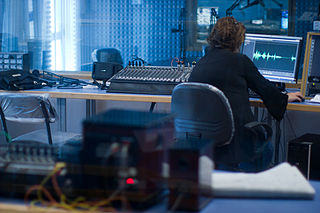 Audio editing software is software which allows editing and generating of audio data. Audio editing software can be implemented completely or partly as a library, as a computer application, as a web application, or as a loadable kernel module. Wave Editors are digital audio editors and there are many sources of software available to perform this function. Most can edit music, apply effects and filters, adjust stereo channels, etc.

DirectSound is a deprecated software component of the Microsoft DirectX library for the Windows operating system. It provides a low-latency interface to sound card drivers written for Windows 95 through Windows XP and can handle the mixing and recording of multiple audio streams. DirectSound was originally written for Microsoft by John Miles.

Final Scratch is a DJ tool created by the Dutch company N2IT with input from Richie Hawtin and John Acquaviva that allows manipulation and playback of digital audio sources using traditional vinyl and turntables. It seeks to cross the divide between the versatility of digital audio and the tactile control of vinyl turntablism.

In computer science, a data buffer is a region of a physical memory storage used to temporarily store data while it is being moved from one place to another. Typically, the data is stored in a buffer as it is retrieved from an input device or just before it is sent to an output device. However, a buffer may be used when moving data between processes within a computer. This is comparable to buffers in telecommunication. Buffers can be implemented in a fixed memory location in hardware—or by using a virtual data buffer in software, pointing at a location in the physical memory. In all cases, the data stored in a data buffer are stored on a physical storage medium. A majority of buffers are implemented in software, which typically use the faster RAM to store temporary data, due to the much faster access time compared with hard disk drives. Buffers are typically used when there is a difference between the rate at which data is received and the rate at which it can be processed, or in the case that these rates are variable, for example in a printer spooler or in online video streaming. In the distributed computing environment, data buffer is often implemented in the form of burst buffer that provides distributed buffering service. 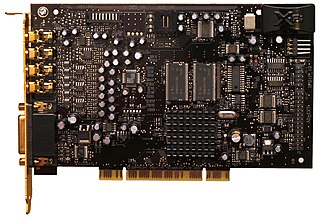 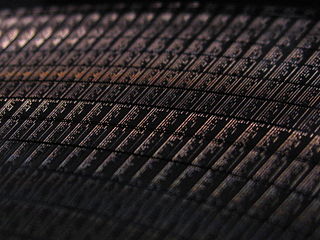 Vinyl emulation software allows the user to physically manipulate the playback of digital audio files on a computer using the turntables as an interface, thus preserving the hands-on control and feel of DJing with vinyl. This has the added advantage of using turntables to play back audio recordings not available in phonograph form. This method allows DJs to scratch, beatmatch, and perform other turntablism that would be impossible with a conventional keyboard-and-mouse computer interface or less tactile control devices. The technology is also mainly referred to as DVS for Digital Vinyl System.

Sound Blaster Live! is a PCI add-on sound card from Creative Technology Limited for PCs. Moving from ISA to PCI allowed the card to dispense with onboard memory, storing digital samples in the computer's main memory and then accessing them in real time over the bus. This allowed for a much wider selection of, and longer playing, samples. It also included higher quality sound output at all levels, quadrophonic output, and a new MIDI synthesizer with 64 sampled voices. The Live! was introduced in August 1998 and variations on the design remained Creative's primary sound card line into the 2000s. 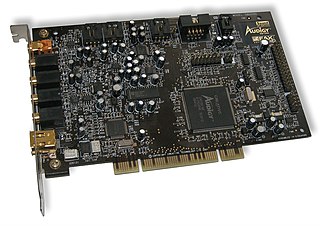 Sound Blaster Audigy is a product line of sound cards from Creative Technology. The flagship model of the Audigy family used the EMU10K2 audio DSP, an improved version of the SB-Live's EMU10K1, while the value/SE editions were built with a less-expensive audio controller. 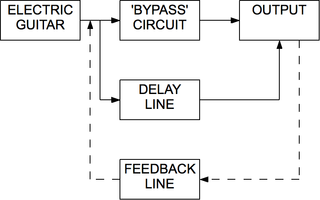 Delay is an audio signal processing technique and an effects unit which records an input signal to an audio storage medium, and then plays it back after a period of time. The delayed signal may either be played back multiple times, or played back into the recording again, to create the sound of a repeating, decaying echo.

This article describes audio APIs and components in Microsoft Windows which are now obsolete or deprecated.

Latency refers to a short period of delay between when an audio signal enters a system and when it emerges. Potential contributors to latency in an audio system include analog-to-digital conversion, buffering, digital signal processing, transmission time, digital-to-analog conversion and the speed of sound in the transmission medium.

Scratch Live is a vinyl emulation software application created by New Zealand based Serato Audio Research, distributed by and licensed exclusively to Rane Corporation. Serato was first known for its Pro Tools plug-in, Pitch N Time, which was sold predominantly to the film industry.

Display lag is a phenomenon associated with some types of liquid crystal displays (LCDs) like smartphones and computers, and nearly all types of high-definition televisions (HDTVs). It refers to latency, or lag measured by the difference between the time there is a signal input, and the time it takes the input to display on the screen. This lag time has been measured as high as 68 ms, or the equivalent of 3-4 frames on a 60 Hz display. Display lag is not to be confused with pixel response time. Currently the majority of manufacturers do not include any specification or information about display latency on the screens they produce.

SoundGrid is a networking and processing platform for real-time professional audio applications. It is a product of Waves Audio.