Drum memory was a magnetic data storage device invented by Gustav Tauschek in 1932 in Austria. [1] [2] Drums were widely used in the 1950s and into the 1960s as computer memory.

For many early computers, drum memory formed the main working memory of the computer. It was so common that these computers were often referred to as drum machines. [3] Some drum memories were also used as secondary storage. [4]

Drums were displaced as primary computer memory by magnetic core memory, which offered a better balance of size, speed, cost, reliability and potential for further improvements. [5] Drums in turn were replaced by hard disk drives for secondary storage, which were both less expensive and offered denser storage. The manufacture of drums ceased in the 1970s.

A drum memory contained a large metal cylinder, coated on the outside surface with a ferromagnetic recording material. It could be considered the precursor to the hard disk drive (HDD), but in the form of a drum rather than a flat disk. In most designs, one or more rows of fixed read-write heads ran along the long axis of the drum, one for each track. The drum's controller simply selected the proper head and waited for the data to appear under it as the drum turned (rotational latency). Not all drum units were designed with each track having its own head. Some, such as the English Electric DEUCE drum and the UNIVAC FASTRAND had multiple heads moving a short distance on the drum in contrast to modern HDDs, which have one head per platter surface.

The performance of a drum with one head per track is comparable to that of a disk with one head per track and is determined almost entirely by the rotational latency, whereas in an HDD with moving heads its performance includes a rotational latency delay plus the time to position the head over the desired track (seek time). In the era when drums were used as main working memory, programmers often did optimum programming—the programmer—or the assembler, e.g., Symbolic Optimal Assembly Program (SOAP)—positioned code on the drum in such a way as to reduce the amount of time needed for the next instruction to rotate into place under the head. [6] They did this by timing how long it would take after loading an instruction for the computer to be ready to read the next one, then placing that instruction on the drum so that it would arrive under a head just in time. This method of timing-compensation, called the "skip factor" or "interleaving" (interleaving in disk storage), was used for many years in storage memory controllers.

One of the earliest functioning computers to employ drum memory was the Atanasoff–Berry computer (1942). It stored 3,000 bits; however, it employed capacitance rather than magnetism to store the information. The outer surface of the drum was lined with electrical contacts leading to capacitors contained within.

Magnetic drums were developed for the U.S. Navy during World War II with the work continuing at Engineering Research Associates (ERA) in 1946 and 1947. [7] An experimental ERA study was completed and reported to the Navy on June 19, 1947. [7] Other early drum storage device development occurred at Birkbeck College (University of London) [8] , Harvard University, IBM and the University of Manchester. An ERA drum was the internal memory for the ATLAS-I computer delivered to the U.S. Navy in October 1950. Through mergers, ERA became a division of UNIVAC shipping the Series 1100 drum as a part of the UNIVAC File Computer in 1956; each drum stored 180,000 characters. [7]

The first mass-produced computer, the IBM 650, had about 8.5 kilobytes of drum memory (later doubled to about 17 kilobytes in the Model 4). As late as 1980, PDP-11/45 machines using magnetic core main memory and drums for swapping were still in use at many of the original UNIX sites.

In BSD Unix and its descendants, /dev/drum was the name of the default virtual memory (swap) device, deriving from the use of drum secondary-storage devices as backup storage for pages in virtual memory. [9]

Magnetic drum memory units were used in the Minuteman ICBM launch control centers from the beginning in the early 1960s until the REACT upgrades in the mid-1990s.

Disk storage is a general category of storage mechanisms where data is recorded by various electronic, magnetic, optical, or mechanical changes to a surface layer of one or more rotating disks. A disk drive is a device implementing such a storage mechanism. Notable types are the hard disk drive (HDD) containing a non-removable disk, the floppy disk drive (FDD) and its removable floppy disk, and various optical disc drives (ODD) and associated optical disc media.

A hard disk drive (HDD), hard disk, hard drive, or fixed disk is an electro-mechanical data storage device that uses magnetic storage to store and retrieve digital data using one or more rigid rapidly rotating platters coated with magnetic material. The platters are paired with magnetic heads, usually arranged on a moving actuator arm, which read and write data to the platter surfaces. Data is accessed in a random-access manner, meaning that individual blocks of data can be stored and retrieved in any order. HDDs are a type of non-volatile storage, retaining stored data even when powered off. 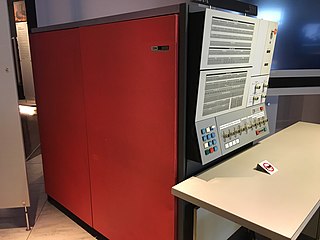 The IBM System/360 (S/360) is a family of mainframe computer systems that was announced by IBM on April 7, 1964, and delivered between 1965 and 1978. It was the first family of computers designed to cover the complete range of applications, from small to large, both commercial and scientific. The design made a clear distinction between architecture and implementation, allowing IBM to release a suite of compatible designs at different prices. All but the only partially compatible Model 44 and the most expensive systems use microcode to implement the instruction set, which features 8-bit byte addressing and binary, decimal and hexadecimal floating-point calculations.

The IBM 650 Magnetic Drum Data-Processing Machine is an early digital computer produced by IBM Corporation in the mid-1950s. The first one was installed in late 1954 and it was the most-popular computer for the next 5 years. It was announced in 1953 and in 1956 enhanced as the IBM 650 RAMAC with the addition of up to four disk storage units. Almost 2,000 systems were produced, the last in 1962. Support for the 650 and its component units was withdrawn in 1969.

UNIVAC is a line of electronic digital stored-program computers starting with the products of the Eckert–Mauchly Computer Corporation. Later the name was applied to a division of the Remington Rand company and successor organizations.

FASTRAND was a magnetic drum mass storage system built by Sperry Rand Corporation for their UNIVAC 1100 series and 418/490/494 series computers. A FASTRAND subsystem consisted of one or two Control Units and up to eight FASTRAND units. A dual-access FASTRAND subsystem included two complete control units, and provided parallel data paths that allowed simultaneous operations on any two FASTRAND units in the subsystem. Each control unit interfaced to one 1100 Series (36-bit), or 490 Series (30-bit), parallel I/O channels. 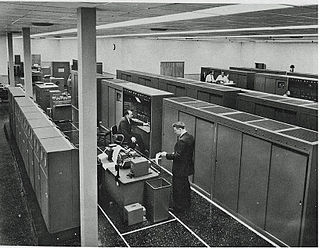 The UNIVAC 1103 or ERA 1103, a successor to the UNIVAC 1101, was a computer system designed by Engineering Research Associates and built by the Remington Rand corporation in October 1953. It was the first computer for which Seymour Cray was credited with design work.

The UNIVAC Solid State was a magnetic drum-based solid-state computer announced by Sperry Rand in December 1958 as a response to the IBM 650. It was one of the first computers to be (nearly) entirely solid-state, using 700 transistors, and 3000 magnetic amplifiers (FERRACTOR) for primary logic, and 20 vacuum tubes largely for power control. It came in two versions, the Solid State 80 and the Solid State 90. In addition to the "80/90" designation, there were two variants of the Solid State – the SS I 80/90 and the SS II 80/90. The SS II series included two enhancements – the addition of 1,280 words of core memory and support for magnetic tape drives. The SS I had only the standard 5,000-word drum memory described in this article and no tape drives.

IBM manufactured magnetic disk storage devices from 1956 to 2003, when it sold its hard disk drive business to Hitachi. Both the hard disk drive (HDD) and floppy disk drive (FDD) were invented by IBM and as such IBM's employees were responsible for many of the innovations in these products and their technologies. The basic mechanical arrangement of hard disk drives has not changed since the IBM 1301. Disk drive performance and characteristics are measured by the same standards now as they were in the 1950s. Few products in history have enjoyed such spectacular declines in cost and size along with equally dramatic improvements in capacity and performance. 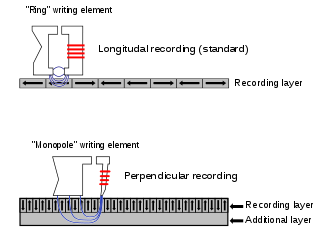 Areal density is a measure of the quantity of information bits that can be stored on a given length of track, area of surface, or in a given volume of a computer storage medium. Generally, higher density is more desirable, for it allows more data to be stored in the same physical space. Density therefore has a direct relationship to storage capacity of a given medium. Density also generally affects the performance within a particular medium, as well as price.

In 1953, IBM recognized the immediate application for what it termed a "Random Access File" having high capacity and rapid random access at a relatively low cost. After considering technologies such as wire matrices, rod arrays, drums, drum arrays, etc., the engineers at IBM's San Jose California laboratory invented the hard disk drive. The disk drive created a new level in the computer data hierarchy, then termed Random Access Storage but today known as secondary storage, less expensive and slower than main memory but faster and more expensive than tape drives.

This article presents a timeline of binary prefixes used to name memory units, in comparison of decimal and binary prefixes for measurement of information and computer storage.

Fixed-block architecture (FBA) is an IBM term for the hard disk drive (HDD) layout in which each addressable block on the disk has the same size, utilizing 4 byte block numbers and a new set of command codes. FBA as a term was created and used by IBM for its 3310 and 3370 HDDs beginning in 1979 to distinguish such drives as IBM transitioned away from their variable record size format used on IBM's mainframe hard disk drives beginning in 1964 with its System/360.

Solid-state storage is a type of non-volatile computer storage that stores and retrieves digital information using only electronic circuits, without any involvement of moving mechanical parts. This differs fundamentally from the traditional electromechanical storage, which records data using rotating or linearly moving media coated with magnetic material. 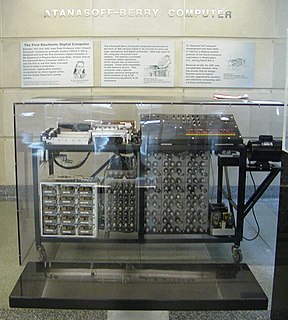