Embedded DRAM (eDRAM) is dynamic random-access memory (DRAM) integrated on the same die or multi-chip module (MCM) [1] of an application-specific integrated circuit (ASIC) or microprocessor. eDRAM's cost-per-bit is higher when compared to equivalent standalone DRAM chips used as external memory, but the performance advantages of placing eDRAM onto the same chip as the processor outweigh the cost disadvantages in many applications. In performance and size, eDRAM is positioned between level 3 cache and conventional DRAM on the memory bus, and effectively functions as a level 4 cache, though architectural descriptions may not explicitly refer to it in those terms.

Embedding memory on the ASIC or processor allows for much wider buses and higher operation speeds, and due to much higher density of DRAM in comparison to SRAM,[ citation needed ] larger amounts of memory can be installed on smaller chips if eDRAM is used instead of eSRAM. eDRAM requires additional fab process steps compared with embedded SRAM, which raises cost, but the 3× area savings of eDRAM memory offsets the process cost when a significant amount of memory is used in the design.

eDRAM memories, like all DRAM memories, require periodic refreshing of the memory cells, which adds complexity. However, if the memory refresh controller is embedded along with the eDRAM memory, the remainder of the ASIC can treat the memory like a simple SRAM type such as in 1T-SRAM. It is also possible to use architectural techniques to mitigate the refresh overhead in eDRAM caches. [2]

eDRAM is used in various products, including IBM's POWER7 processor, [3] and IBM's z15 mainframe processor (mainframes built which use up to 4.69 GB of eDRAM when 5 such add-on chips/drawers are used but all other levels from L1 up also use eDRAM, for a total of 6.4 GB of eDRAM). Intel's Haswell CPUs with GT3e integrated graphics, [4] many game consoles and other devices, such as Sony's PlayStation 2, Sony's PlayStation Portable, Nintendo's GameCube, Nintendo's Wii, Nintendo's Wii U, Apple Inc.'s iPhone, Microsoft's Zune HD, and Microsoft's Xbox 360 also use eDRAM.

1T-SRAM is a pseudo-static random-access memory (PSRAM) technology introduced by MoSys, Inc., which offers a high-density alternative to traditional static random access memory (SRAM) in embedded memory applications. Mosys uses a single-transistor storage cell like dynamic random access memory (DRAM), but surrounds the bit cell with control circuitry that makes the memory functionally equivalent to SRAM. 1T-SRAM has a standard single-cycle SRAM interface and appears to the surrounding logic just as an SRAM would. 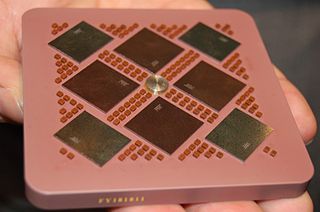 A multi-chip module (MCM) is generically an electronic assembly where multiple integrated circuits, semiconductor dies and/or other discrete components are integrated, usually onto a unifying substrate, so that in use it can be treated as if it were a larger IC. Other terms, such as "hybrid" or "hybrid integrated circuit", also refer to MCMs. The individual ICs that make up an MCM are known as Chiplets. Intel and AMD are using MCMs to improve performance and reduce costs, as splitting a large monolithic IC into smaller chiplets allows for easy performance improvements, more ICs per wafer, and improved yield, as smaller dies have a reduced risk of getting destroyed by dust particles during semiconductor fabrication. Each chiplet is physically smaller than a conventional monolithic IC die,. An example of MCMs in use for mainstream CPUs is AMD's Zen 2 design.

Microsoft XCPU, codenamed Xenon, is a CPU used in the Xbox 360 game console, to be used with ATI's Xenos graphics chip. 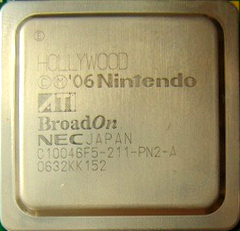 Hollywood is the name of the graphics processing unit (GPU) used in Nintendo's Wii video game console. It was designed by ATI, and is manufactured using the same 90 nm CMOS process as the "Broadway" processor. Very few official details were released to the public by Nintendo, ATI, or IBM. The Hollywood GPU is reportedly based on the GameCube's "Flipper" GPU and is clocked 50% higher at 243 MHz, though none of the clock rates were ever confirmed by Nintendo, IBM, or ATI. 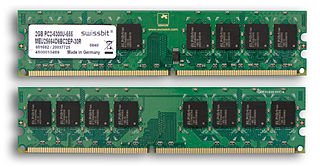 A 1996–2004 research project in the Computer Science Division of the University of California, Berkeley, the Berkeley IRAM project explored computer architecture enabled by the wide bandwidth between memory and processor made possible when both are designed on the same integrated circuit (chip). Since it was envisioned that such a chip would consist primarily of random-access memory (RAM), with a smaller part needed for the central processing unit (CPU), the research team used the term "Intelligent RAM" to describe a chip with this architecture. Like the J–Machine project at MIT, the primary objective of the research was to avoid the Von Neumann bottleneck which occurs when the connection between memory and CPU is a relatively narrow memory bus between separate integrated circuits.

Broadwell is Intel's codename for the 14 nanometer die shrink of its Haswell microarchitecture. It is a "tick" in Intel's tick–tock principle as the next step in semiconductor fabrication. Like some of the previous tick-tock iterations, Broadwell did not completely replace the full range of CPUs from the previous microarchitecture (Haswell), as there were no low-end desktop CPUs based on Broadwell.

Espresso is the codename of the 32-bit central processing unit (CPU) used in Nintendo's Wii U video game console. It was designed by IBM, and was produced using a 45 nm silicon-on-insulator process. The Espresso chip resides together with a GPU from AMD on a MCM manufactured by Renesas. It was revealed at E3 2011 in June 2011 and released in November 2012.