Robert Renwick Mortimer (born 23 May 1959)[ citation needed ] is an English comedian, podcast presenter, and actor. He is known for his work with Vic Reeves as part of their Vic and Bob comedy double act, and more recently the Mortimer & Whitehouse: Gone Fishing series with comedian Paul Whitehouse. He has also appeared on panel shows such as Would I Lie to You? and Taskmaster.

Mortimer was raised with three brothers in the Linthorpe area of Middlesbrough. [1] His father, a biscuit salesman, died in a car crash when Mortimer was seven. [2]

Mortimer attended Acklam High School on the site of Acklam Hall in Acklam, Middlesbrough. His schoolmates included Ali Brownlee, who would go on to become a sports presenter on BBC Tees. [3]

He had trials for local professional football club Middlesbrough, and although he was not able to join the club as a professional due to arthritis, he still supports them. He left school with three A-levels and went on to study law at the universities of Sussex and Leicester. There, Mortimer became involved in political causes and the punk movement, starting a band called Dog Dirt. [4] After leaving university with an LLM in Welfare Law, Mortimer moved to London and became a solicitor for Southwark Council. He then moved to a private practice in Peckham, where his work with Public Health Act cases regarding cockroach infestation of council properties led to a local paper dubbing Mortimer "The Cockroach King". [5]

In 1986, Mortimer went to the Goldsmith's Tavern in New Cross, London, to see a new show by a comedian called Vic Reeves. Mortimer was impressed by the performance, particularly the character Tappy Lappy, which was Reeves attempting to tap dance while wearing a Bryan Ferry mask and planks on his feet. Mortimer approached Reeves after the show, and the two began writing material for the next week's show together. They also became good friends, even forming a band called the Potter's Wheel. Mortimer began to perform on the show, which was christened Vic Reeves Big Night Out , creating such characters as the Singing Lawyer, Graham Lister, Judge Nutmeg and the Man With the Stick.

The show became successful in South London and eventually outgrew Goldsmith's Tavern, moving in 1988 to the Albany Empire in Deptford. Mortimer soon became an integral part of the performance, providing him with a weekly break from the legal work, which had begun to disillusion him. He once quipped that the final straw was a run in with a mugger who, recognising Mortimer as having represented him legally, promptly stood down and apologised for not recognising him.[ citation needed ]

Reeves and Mortimer made their television debut on the short-lived 1989 comedy chat show One Hour with Jonathan Ross , in the game show segment known as knock down ginger .

Later that year, the duo made their first television pilot together, Vic Reeves Big Night Out, in late 1989. The television show remained true to the nightclub act's variety show format. Mortimer took a 10-week break from his legal job to film the series and never returned.

The two later created a one-off pilot for a sitcom called The Weekenders in 1992, followed by the sketch show The Smell of Reeves and Mortimer in 1993 and Shooting Stars , a comedy panel show that first aired in December 1993. After being commissioned, Shooting Stars ran for five series between 1995 and 2002, with a special anniversary edition broadcast in December 2008. A sixth series was broadcast in late 2009, followed by a seventh series in mid-2010, and eighth in 2011.

In 1999, Reeves and Mortimer appeared in a second sketch show called Bang Bang, It's Reeves and Mortimer . A year later, Mortimer played the part of Jeff Randall in Randall & Hopkirk (Deceased) , opposite Reeves as Marty Hopkirk and Emilia Fox as Jeannie Hurst.

In 2003, Mortimer and Reeves were listed in The Observer as one of the 50 funniest acts in British comedy. [6] In a 2005 poll to find the Comedians' Comedian, the duo were voted the 9th greatest comedy act of all time by fellow comedians and comedy insiders. [7]

On 27 February 2008, Reeves announced that he and Mortimer were working together on a new sitcom about super heroes who get their powers through a malfunctioning telegraph pole. [9]

In November 2013, Reeves and Mortimer filmed episodes of a new BBC sitcom, House of Fools , also featuring Matt Berry (as Beef), Morgana Robinson (as Julie), and Dan Skinner (as Bosh).

In October 2015 the pair cancelled the first leg of their live tour, 25 Year of Reeves and Mortimer: The Poignant Moments, after Mortimer underwent an emergency triple heart bypass. [10]

At around the age of 7, Mortimer accidentally burnt down his family's home with a stray firework. [17] He suffers from rheumatoid arthritis, which gives him great pain when he is stressed, especially before making a television series or embarking on a tour. On those occasions, he controls the illness with steroids. [18] In October 2015, it was revealed that he was recovering from a triple bypass surgery which led to the cancellation of the first leg of the Reeves and Mortimer 25 years tour. [19]

Mortimer married his partner of 22 years, Lisa Matthews, in October 2015, 30 minutes prior to receiving his heart surgery (after getting permission from the registrar to move the date forward). The couple have two sons, Harry and Tom. [20]

He is a lifelong fan of Middlesbrough Football Club and the rock group Free. During his appearance on Desert Island Discs , Mortimer revealed that the first 30 years of his life were defined by a crippling shyness, which only began to alleviate after his initial television success. He also reflected on how his father's early death had shaped his personality, despite not realising how far this event had affected him as a child. [21]

Paul Julian Whitehouse is a Welsh actor, writer and comedian. He was one of the main stars of the BBC sketch comedy series The Fast Show, and has also starred with Harry Enfield in the shows Harry & Paul and Harry Enfield & Chums. In a 2005 poll to find The Comedian's Comedian, he was in the top 50 comedy acts voted for by comedians and comedy insiders. 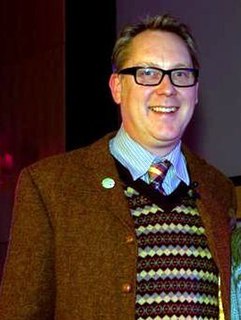 Vic and Bob, also known as Reeves and Mortimer, are a British comedy double act consisting of Vic Reeves and Bob Mortimer. They have written and starred in several comedy programmes on British television since 1990, with Reeves having made his first TV appearance in 1986.

James Roderick Moir, better known by the stage name Vic Reeves, is an English comedian, artist, surrealist, musician, actor and television presenter, best known for his double act with Bob Mortimer as Vic and Bob. He is known for his surreal sense of humour.

Simon William Day is an English comedian and actor most famous for his roles in the sketch show The Fast Show and the sitcom Grass.

Swiss Toni is a fictional used-car dealer played by Charlie Higson, and also the title of a sitcom in which he is the main character. Toni is a 50-something car dealer going through a midlife crisis. To him almost any situation in life is best considered as being "like making love to a beautiful woman", in some rather implausible ways through the use of sexual innuendo. Toni is usually depicted wearing a grey suit and with his hair styled in a platinum blond bouffant quiff. The character was created by Charlie Higson and Bob Mortimer and originally introduced in the BBC comedy series The Smell of Reeves and Mortimer, but is best known as a recurring character in another BBC comedy series, The Fast Show.

Vic Reeves Big Night Out was a cult British comedy stage show and later TV series which ran on Channel 4 for two series in 1990 and 1991, as well as a New Year special. Its live incarnation marked the beginnings of the collaboration between Vic Reeves and Bob Mortimer and started their Reeves and Mortimer comedy double act.

Reeson Wayne "Reece" Shearsmith is an English actor, writer and comedian. He created, wrote and starred in the sketch show The League of Gentlemen, along with Steve Pemberton, Mark Gatiss, and Jeremy Dyson. 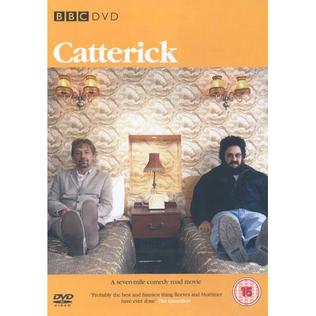 Catterick, aka Vic and Bob in Catterick, is a surreal 2004 BBC situation comedy in 6 episodes, written by and starring Vic Reeves and Bob Mortimer, with Reece Shearsmith, Matt Lucas, Morwenna Banks, Tim Healy, Mark Benton and Charlie Higson. The series was originally broadcast on BBC Three and later rerun on BBC Two. Reeves has said that the BBC do not want another series of Catterick, though he may produce a spin-off centring on the DI Fowler character.

Lee Gordon McKillop, known by his stage name Lee Mack, is an English comedian, presenter and actor. He is known for writing and starring in the sitcom Not Going Out, being a team captain on the BBC One comedy panel show Would I Lie to You?, hosting the Sky One panel show Duck Quacks Don't Echo and presenting the panel show They Think It's All Over. 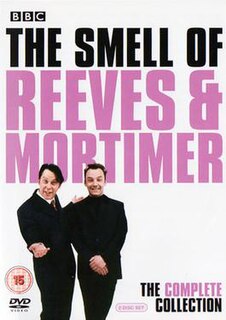 The Smell of Reeves and Mortimer is a BBC TV sketch show written by and starring double act Vic Reeves and Bob Mortimer. Its first series appeared in 1993 following the duo's move to the BBC after parting company with Channel 4. The show developed and expanded upon the absurd, anarchic comedy that the pair had first explored on Channel 4's Vic Reeves Big Night Out.

Bang Bang, It's Reeves and Mortimer is a British comedy television series, the third by comedy double act Vic Reeves and Bob Mortimer and their second in a sketch show format. Directed by Mark Mylod and produced by Alan Marke, it first aired in 1999 on BBC2.

Daniel Renton Skinner is an English actor and comedy writer, working in stage, film and television. Skinner often performs as the character Angelos Epithemiou and is a member of the British five-man sketch troupe Dutch Elm Conservatoire. The group were nominated for the Perrier award at the Edinburgh Festival Fringe in 2005.

Tim Key is an English actor, writer and performance poet. In 2009, he was the winner of the Edinburgh Comedy Award and was also nominated for the Malcolm Hardee Award for Comic Originality. He is best known for his own stand-up and as the character Sidekick Simon in Mid Morning Matters and This Time, both with Alan Partridge.

Randall & Hopkirk (Deceased) is a British television series, produced by Working Title Television for BBC One, written and produced by Charlie Higson. It is a revival of the 1960s television series Randall and Hopkirk (Deceased) and stars Vic Reeves as Marty Hopkirk and Bob Mortimer as Jeff Randall, two partner private detectives, Emilia Fox as Jeannie Hurst, Hopkirk's fiancée, and Tom Baker as Wyvern, a spirit mentor. Two series were commissioned and were broadcast in 2000 and 2001 with the pilot episode airing 18 March 2000.

The Weekenders was a one-off comic television pilot starring Vic Reeves and Bob Mortimer, produced by Granada Television for Channel 4. Broadcast on Wednesday 17 June 1992 as part of a series of pilots entitled Bunch of Five, it was a surreal sitcom in which two friends, Jim and Bob, visit a meat festival taking place in an open field. They are then chased by aliens who want the meat they have bought to feed their queen.

Pett Productions was an independent production company, established by Bob Mortimer, Vic Reeves and Lisa Clark in 2001. The company was based at the Maidstone Studios in Maidstone, Kent and has produced several television shows in comedy, reality, documentary and internet format. It was dissolved in May 2015.

Vic Reeves' House Arrest was a weekly radio comedy series written by and starring Vic Reeves. It was produced by Open Mike Productions and broadcast on BBC Radio 2 It co-starred Reeves' wife, Nancy Sorrell, his comedy partner, Bob Mortimer and The Mighty Boosh star, Noel Fielding. It was first broadcast in 2007 in the 1 pm slot on Saturday afternoons.

House of Fools is a British comedy television series that was first broadcast on BBC Two on 14 January 2014. The series features Bob Mortimer and Vic Reeves, who are also the writers.