The Voyage of Bran is a medieval 8th-century Irish language narrative.

In the Ulster Cycle of early Irish literature, the Lúin of Celtchar is the name of a long, fiery lance or spear belonging to Celtchar mac Uthechar and wielded by other heroes, such as Dubthach, Mac Cécht and Fedlimid.

The Annals of Tigernach are chronicles probably originating in Clonmacnoise, Ireland. The language is a mixture of Latin and Old and Middle Irish.

Saint Nath Í, or Crumnathy, was an early Irish saint who was remembered as the founder of Achonry. 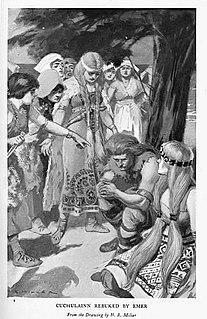 Tochmarc Emire is one of the stories in the Ulster Cycle of Irish mythology and one of the longest when it received its form in the second recension (below). It concerns the efforts of the hero Cú Chulainn to marry Emer, who appears as his wife in other stories of the cycle, and his training in arms under the warrior-woman Scáthach. The tochmarc is one of the 'genres' of early Irish literature recognised in the manuscript corpus.

The title Trecheng Breth Féne "A Triad of Judgments of the Irish", more widely known as "The Triads of Ireland", refers to a miscellaneous collection of about 256 Old Irish triads on a variety of topics, such as nature, geography, law, custom and behaviour. Its compilation is usually dated to the ninth century.

Egerton MS 1782 is the index title of an early sixteenth-century Irish vellum manuscript housed in the Egerton Collection of the British Library, London.

Cath Finntrágha is an Early Modern Irish prose narrative of the Finn Cycle. It dates probably to the 15th century in its current form, but apparently relied on older material. It concerns the deeds of the warrior-hero Finn mac Cumaill and his fianna as they defend Ireland against a foreign invasion led by the world-king Dáire Donn.

The Expulsion of the Déisi is a medieval Irish narrative of the Cycles of the Kings. It dates approximately to the 8th century, but survives only in manuscripts of a much later date. It describes the fictional history of the Déisi, a group that had gained political power in parts of Ireland during the Early Middle Ages. Part of the text's purpose is to provide the kings of the Déisi – historically the descendants of unlanded vassals to other tribes – with a mythical noble origin as the heirs to a dynasty expelled from Tara.

Dáire Doimthech, alias Dáire Sírchréchtach, son of Sithbolg, was a legendary King of Tara and High King of Ireland, and one of the eponymous ancestors of the proto-historical Dáirine and historical Corcu Loígde of Munster. A son of his was Lugaid Loígde, an ancestor of Lugaid Mac Con. In the Scéla Mosauluim, Dáire Doimthech is referred to as one of the five kings of Tara from Munster, or alternatively one of five Dáires to rule at Tara.

The Tale of Mac Da Thó's Pig is a legendary tale in the Ulster Cycle.

Scéla Conchobair maic Nessa or the Tidings of Conchobar mac Nessa is a title invented by Whitley Stokes for a short prose piece from the Ulster Cycle preserved in the 12th-century manuscript, the Book of Leinster. It is interpolated with lore not found elsewhere regarding the branches (halls) of the Ulster court at Emain Macha and the shields of the Ulstermen.

Robert of Cricklade was a medieval English writer and prior of St Frideswide's Priory in Oxford. He was a native of Cricklade and taught before becoming a cleric. He wrote several theological works as well as a lost biography of Thomas Becket, the murdered Archbishop of Canterbury.