Bondel is a residential locality in Mangalore city, Karnataka, India. It is one of the upscale residential localities of Mangalore. Bondel along with Maryhill houses many highrise buildings and also developing rapidly as a commercial center. It lies in Airport road, which originates in KPT Junction and extends till Mangalore International Airport. Kavoor, one of the major localities of Mangalore is located nearby. This locality is close to the airport too.

Bondel is well connected by public transport. There are several city buses (19,13,14 etc.) from the main bus stop in Statebank, Mangalore and other parts of the city.

Surathkal is a locality in the northern part of Mangalore city located on National highway 66 in the Dakshina Kannada district, Karnataka state, India on the shore of Arabian sea. It is a municipality merged with Mangalore City Corporation. It lies between Gurupura (Phalguni) and Pavanje (Nandini) rivers. It is the northern suburb & can be considered as the northernmost area of Mangalore City until Mukka. Surathkal is 1.5 km from Surathkal railway station, 8 km north of New Mangalore seaport, 8 km west of Mangalore Refinery & Petrochemicals Limited and 16 km west of Mangalore International Airport This region has developed educationally, industrially & commercially can be regarded as one of the crucial localities in Mangalore & coastal Karnataka. The only NIT of Karnataka is situated here which is adjacent to the national highway NH 66. Mukka a popular name in Indian surfing is also situated close to Surathkal. Surathkal beach is well known for its cleanliness and well maintained like other beaches in Mangalore.

Kadri Park is a park located in Kadri Gudde. It is the largest park in Mangalore. This park contains a musical fountain and has hosted the Karavali Utsav. The park is famous for flower shows in Mangalore.

Talapady is a village in the Mangalore city Dakshina Kannada district of Karnataka state in India. Talapady borders the states of Karnataka and Kerala. National Highway 66 passes through Talapady which is 17 km (11 mi) south of Mangalore city. The Karnataka-Kerala checkpost border is situated at Talapady. Another village Thalapady ,Kasargod which is situated near to Talapady in Manjeswar crossing Kerala border. 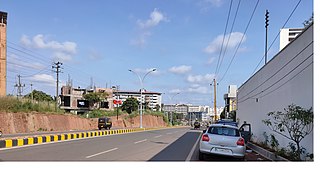 Deralakatte is a major educational, healthcare, commercial & residential locality in the south-eastern part of Mangalore city in Dakshina Kannada district of Karnataka state. It is 9 km (5.6 mi) away from the Karnataka-Kerala state border. It is popularly known as the University town with more number of student population & the stretch from Thokottu junction to Konaje is also known as the Medical corridor road due to the presence of many premium educational institutions & healthcare facilities where Deralakatte lies in between. It is close to Mangalore University, Konaje, Mudipu Infosys, Soorya Infratech Park, Thokottu & Ullal. Ullal beach, Someshwar Beach, Pilikula Nisargadhama are some of the nearest tourist destinations. This University Town, Home to the NITTE University, Yenepoya University, Father Muller Charitable Institutions, Fathers Mullers Homeopathic Medical college hospital and Kanachur Groups of institutions and Hospital. It is a largest University town in Mangalore after Manipal university in terms of students from all over the country and other parts of the world.

Pilikula Nisargadhama is a multi-purpose tourist attraction, at Vamanjoor, eastern part of Mangalore city in Karnataka, promoted by the District Administration of Dakshina Kannada. It is a major tourist attraction of Mangalore. It attracts large number of tourists due to the availability of multiple facilities.

Kadri is one of the major commercial and residential localities in Mangalore. Kadri is home to the famous Kadri Manjunath Temple.

Ullal Beach is situated on the southwestern seaboard of the Indian sub-continent, adjacent to Ullal town, 10 km south of the city of Mangalore, Karnataka, India. Attractions are its picturesque stretch of Coconut trees, fishermen’s lane, the ruined fort of Abbakka Devi and 16th century Jain temples. A resort is also situated nearby.

Kulur or Kuloor is a locality in Mangalore city, Karnataka, India. Kulur is one of the major commercial junctions in the city. It is the gateway of Mangalore City South. To the north there is Guru]pura river. It connects the northern parts of city like Surathkal, Kulai, Baikampady, Panambur to the eastern parts like Airport, Bajpe, Kavoor, Bondel, Maryhill, Vamanjoor & to the southern parts like Kottara, Bejai, MG Road, Statebank, Pumpwell, Thokottu, Ullal, Deralakatte, Konaje. The River Festival of Mangalore was held at Kulur along with Bangrakulur & Tannirbhavi. The district administration & Mangalore City Corporation proposed of building a permanent jetty at Kulur, to promote the backwater tourism of Mangalore along Gurupura River. The Kulur-Tannirbhavi corridor will be developed as a major tourists attraction under the Smart City Project..

Maryhill is a locality in Mangalore city, Karnataka, India. It is one of the upscale residential localities of Mangalore. Maryhill along with Bondel houses many highrise buildings and also developing rapidly as a commercial center. Tulu is the main language which is spoken and understood by everyone in this locality. Konkani, Kannada are the other languages that is commonly used. Maryhill is predominantly a residential area and famous for Helipad. Many people use the Helipad daily for morning and evening walk. There are around 10 to 15 youth who enthusiastically gather at Maryhill helipad every Sunday at 8 am to fly their radio controlled aircraft. Instructors in the group train their pupils to fly these aircraft and also to operate radio-controlled motor cars

Mangalore Junction is a gateway to the port city of Mangaluru located at Darbar Hill, Padil, Mangaluru, 575007, coming under the Palakkad Division of Southern Railway. The station is a junction interconnecting Mangalore Central railway station with Kerala in the south, Maharashtra/Goa and Mangalore Sea Port in the north and Bengaluru-Chennai in the east. It is the busiest railway junction in the area, as all north- and southbound trains touch Mangalore through this station.

Panambur Beach is a beach in the city of Mangalore in the Indian state of Karnataka.

NITK Beach is situated in Surathkal, the northern part of Mangalore city, Karnataka. This beach is also known as Surathkal beach. It was later named after the nearby NITK .It is a private beach. 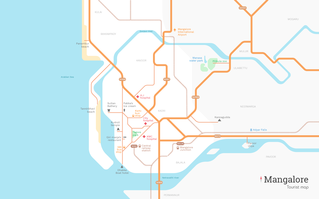 The city of Mangalore is proclaimed as the gateway to Karnataka and lies nestled between the blue waters of the Arabian Sea and the green, towering hills of the Western Ghats. The 184 square km city is spread out over the backwaters of the two rivers, Netravati and Gurpura.

Tagore Park is a recreation park situated in Mangalore in the state of Karnataka in India. It contains a lighthouse, with a height of 33 feet built in the year 1900. The lighthouse carries an acetylene light. It is located adjacent to Light house hill (LHH) road, one of the busiest roads in the city.

Sasihithlu beach is located north of Mangalore city in the state of Karnataka in India. It is situated approximately 6 km to the west of NH 66, and surrounded by the backwaters of Pavanje and Shambhavi rivers. Pavanje and Shambhavi rivers meet at this place. It is close to Mukka, one of the fastest developing localities of Mangalore. This beach has hosted the Indian Open of Surfing in 2016 and 2017.