The Calcutta and Burmah Steam Navigation Company had been formed out of Mackinnon, Mackenzie & Co, a trading partnership of the Scots William Mackinnon and Robert Mackenzie, to carry mail between Calcutta and Rangoon. It became British India SN Co in 1862. Under the hand of Lord Inchcape, who had become chairman in 1913, the company became part of the P&O group of companies in 1914 through a complex amalgamation, but continued with its own identity and organisation for another nearly 60 years until 1972, when it was entirely absorbed into P&O.

As one of the largest shipowners of all time, the company owned more than 500 ships and managed 150 more for other owners. At its height in 1922, BI had more than 160 ships in the fleet, many built on Clydeside, Scotland. The main shipping routes of the line were: Britain to India, Australia, Kenya, Tanganyika. The company ran services from India to Pakistan, Ceylon, Bay of Bengal, Singapore, Malaya, Java, Thailand, Japan, Persian Gulf, East Africa and South Africa. BI had a long history of service to the British and Indian governments through trooping and other military contracts. In the last decade of its operational existence BI carried thousands of school children on educational cruises.

The SS Mantola was sunk in February 1917 by a torpedo from a German submarine off the coast of Ireland with a substantial cargo of silver bullion.

The cargo ship Gairsoppa, carrying silver bullion, pig iron and tea, which was sunk at great depth by the German submarine U-101 in February 1941 some 300 nautical miles (560 km; 350 mi) southwest of Galway Bay, Ireland, carried the richest cargo of any sunken ship in world history. [1]

Some of the company's better known passenger ships included Rajula, Dunera, Scindia, Sirdhana, Leicestershire, Dwarka, the sister ships Kampala and Karanja, and Kenya and Uganda, and Dara, which was sunk by a terrorist bomb in 1961.

Nevasa of 1956 was the final passenger ship built for BI. Serving as a troopship until redundant in 1962, Nevasa was assigned new duties with the BI educational cruise ship flotilla until 1974, when she became uneconomic [2] due a four fold increase in crude oil prices and was scrapped in 1975 having earlier been joined in this trade by the more economic Uganda. The highly popular Uganda was taken up (STUFT) by the British Ministry of Defence in 1982 as a hospital ship during the Falklands war with Argentina. Returning to BI's tradition of government service again in 1983 – this time as a troopship – Uganda was "the last BI" when finally withdrawn in 1985. Dwarka holds the distinction of closing British-India's true "liner" services, when withdrawn from the company's Persian Gulf local trades in 1982, in her 35th year.

HMT Rohna was a British India Steam Navigation Company passenger and cargo liner that was built on Tyneside in 1926 as SS Rohna and requisitioned as a troop ship in 1940. Rohna was sunk in the Mediterranean in November 1943 by a Henschel Hs 293 guided glide bomb launched by a Luftwaffe aircraft. More than 1,100 people were killed, most of whom were US troops.

SS Uganda was a British steamship that had a varied and notable career. She was built in 1952 as a passenger liner, and successively served as a cruise ship, hospital ship, troop ship and stores ship. She was laid up in 1985 and scrapped in 1992.

Sir William Mackinnon, 1st Baronet was a Scottish ship-owner and businessman who built up substantial commercial interests in India and East Africa. He established the British-India Steam Navigation Company and the Imperial British East Africa Company.

TSS Fairstar was a popular Australian-based cruise ship operating out of Sydney for 22 years. Originally completed in 1957 as the British troopship Oxfordshire, it was converted to become the Fairstar in 1964 for immigrant voyages and from December 1974 was permanently engaged in cruising.

Rohilla was a passenger steamer of the British India Steam Navigation Company which was built for service between the UK and India, and as a troopship. After becoming a hospital ship in the First World War, She ran aground in October 1914 near Whitby with the loss of 83 lives.

P Henderson & Company, also known as Paddy Henderson, was a ship owning and management company based in Glasgow, Scotland and operating to Burma. Patrick Henderson started business in Glasgow as a merchant at the age of 25 in 1834. He had three brothers. Two were merchants working for an agent in the Italian port of Leghorn; the third, George, was a sea captain with his own ship. 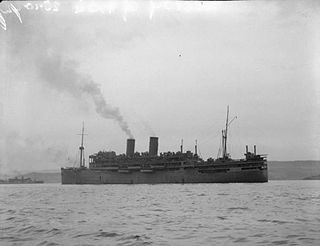 RMS Viceroy of India was an ocean liner of the Peninsular and Oriental Steam Navigation Company (P&O). She was a British Royal Mail Ship on the Tilbury–Bombay route and was named after the Viceroy of India. In World War II she was converted to and used as a troopship. She was sunk in the Mediterranean in November 1942 by German submarine U-407.

James Lyle Mackay, 1st Earl of Inchcape,, known as Sir James Mackay from 1894 to 1911, was a British businessman and colonial administrator in India who became Chairman of the Peninsular and Oriental Steam Navigation Company ("P&O") and founded Inchcape plc.

USS Wilhelmina (ID-2168) was a transport for the United States Navy during World War I. Built in 1909 for Matson Navigation Company as SS Wilhelmina, she sailed from the West Coast of the United States to Hawaii until 1917. After her war service, she was returned to Matson and resumed Pacific Ocean service. In the late 1930s she was laid up in San Francisco, California, until sold to a British shipping company in 1940. While a part of a convoy sailing from Halifax, Nova Scotia, to Liverpool, she was sunk by U-94 on 2 December 1940.

RMS Moldavia was a British passenger steamship of the early 20th century. She served as the Royal Navy armed merchant cruiser HMS Moldavia during World War I until sunk by an Imperial German Navy submarine in 1918.

MV Dwarka was the second of four "modern D Class" passenger/cargo sister ships of the British India Steam Navigation Company (BI). The only one of the quartet to be built by Swan, Hunter & Wigham Richardson at Walker, Newcastle upon Tyne, Dwarka entered service in 1947 on her owners' Persian Gulf local trades. She was named after Dwarka, an ancient city of religious significance in the state of Gujarat, on India's northwest coast.

HMHS Rewa was a steamship originally built for the British-India Steam Navigation Company for their mail and passenger service but requisitioned in August 1914 and fitted out for use as a British hospital ship during the First World War. On 4 January 1918, she was hit and sunk by a torpedo from the German U-boat U-55.

Takliwa was a 7,936 GRT cargo liner which was built in 1924 by Barclay, Curle & Co Ltd, Glasgow, Scotland for the British India Steam Navigation Company. She was converted to a hospital ship during the Second World War, serving until she was wrecked in October 1945.

The Indo-China Steam Navigation Company, Limited (ICSNC), was established in 1873 as a subsidiary of Hong Kong based Jardine, Matheson & Co., one of the largest trading companies in the Far East at that time.

SS Mantola was a passenger steamer of the British-India Steam Navigation Company. Launched in 1916 by Barclay Curle & Company, Glasgow, she sailed for less than a year before being sunk by a German U-boat while carrying a large quantity of silver bullion.

This article is primarily about the third ship to bear this name, however there were two previous ships : SS Nevasa and HMT/HMHS Nevasa. All three ships were operated by the British India Steam Navigation Company.