British Standards (BS) are the standards produced by the BSI Group which is incorporated under a royal charter (and which is formally designated as the national standards body (NSB) for the UK). [1] The BSI Group produces British Standards under the authority of the charter, which lays down as one of the BSI's objectives to: [2]

Formally, as stated in a 2002 memorandum of understanding between the BSI and the United Kingdom Government, British Standards are defined as:

"British Standards" means formal consensus standards as set out in BS 0-1 paragraph 3.2 and based upon the principles of standardisation recognised inter alia in European standardisation policy.

Products and services which BSI certifies as having met the requirements of specific standards within designated schemes are awarded the Kitemark. [4]

BSI Group began in 1901 as the Engineering Standards Committee, led by James Mansergh, to standardize the number and type of steel sections, in order to make British manufacturers more efficient and competitive. Over time the standards developed to cover many aspects of tangible engineering, and then engineering methodologies including quality systems, safety and security.

The BSI Group as a whole does not produce British Standards, as standards work within the BSI is decentralized. The governing board of BSI establishes a Standards Board. The Standards Board does little apart from setting up sector boards (a sector in BSI parlance being a field of standardization such as ICT, quality, agriculture, manufacturing, or fire). Each sector board, in turn, constitutes several technical committees. It is the technical committees that, formally, approve a British Standard, which is then presented to the secretary of the supervisory sector board for endorsement of the fact that the technical committee has indeed completed a task for which it was constituted. [5]

The standards produced are titled British Standard XXXX[-P]:YYYY where XXXX is the number of the standard, P is the number of the part of the standard (where the standard is split into multiple parts) and YYYY is the year in which the standard came into effect. BSI Group currently has over 27,000 active standards. Products are commonly specified as meeting a particular British Standard, and in general, this can be done without any certification or independent testing. The standard simply provides a shorthand way of claiming that certain specifications are met, while encouraging manufacturers to adhere to a common method for such a specification.

The Kitemark can be used to indicate certification by BSI, but only where a Kitemark scheme has been set up around a particular standard. It is mainly applicable to safety and quality management standards. There is a common misunderstanding that Kitemarks are necessary to prove compliance with any BS standard, but in general, it is neither desirable nor possible that every standard be 'policed' in this way.

Following the move on harmonization of the standard in Europe, some British Standards are gradually being superseded or replaced by the relevant European Standards (EN).

Standards are continuously reviewed and developed and are periodically allocated one or more of the following status keywords. [6]

PAS documents are a flexible and rapid standards development model open to all organizations. A PAS is a sponsored piece of work allowing organizations flexibility in the rapid creation of a standard while also allowing for a greater degree of control over the document's development. A typical development time frame for a PAS is around six to nine months. Once published by BSI, a PAS has all the functionality of a British Standard for the purposes of creating schemes such as management systems and product benchmarks as well as codes of practice. A PAS is a living document and after two years the document will be reviewed and a decision made with the client as to whether or not this should be taken forward to become a formal standard. The term PAS was originally an abbreviation for "product approval specification", a name which was subsequently changed to “publicly available specification”. However, according to BSI, not all PAS documents are structured as specifications and the term is now sufficiently well established not to require any further amplification.

Copies of British Standards are sold at the BSI Online Shop [9] or can be accessed via subscription to British Standards Online (BSOL). [10] They can also be ordered via the publishing units of many other national standards bodies (ANSI, DIN, etc.) and from several specialized suppliers of technical specifications.

British Standards, including European and international adoptions, are available in many university and public libraries that subscribe to the BSOL platform. Librarians and lecturers at UK-based subscribing universities have full access rights to the collection while students can copy/paste and print but not download a standard.[ citation needed ] Up to 10% of the content of a standard can be copy/pasted for personal or internal use and up to 5% of the collection made available as a paper or electronic reference collection at the subscribing university. Because of their reference material status standards are not available for interlibrary loan. Public library users in the UK may have access to BSOL on a view-only basis if their library service subscribes to the BSOL platform. Users may also be able to access the collection remotely if they have a valid library card and the library offers secure access to its resources.

The BSI Knowledge Centre in Chiswick, London can be contacted directly about viewing standards in their Members’ Reading Room. [11]

Business continuity planning is the process of creating systems of prevention and recovery to deal with potential threats to a company. In addition to prevention, the goal is to enable ongoing operations before and during execution of disaster recovery. 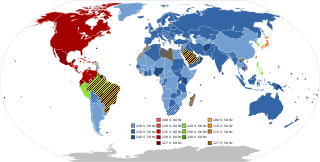 Mains electricity by country includes a list of countries and territories, with the plugs, voltages and frequencies they commonly use for providing electrical power to low voltage appliances, equipment, and lighting typically found in homes and offices. Some countries have more than one voltage available. For example, in North America most sockets are attached to a 120 V supply, but there is a 240 V supply available for large appliances. Often different sockets are mandated for different voltage or current levels.

Industrial and multiphase plugs and sockets provide a connection to the electrical mains rated at higher voltages and currents than household plugs and sockets. They are generally used in polyphase systems, with high currents, or when protection from environmental hazards is required. Industrial outlets may have weatherproof covers, waterproofing sleeves, or may be interlocked with a switch to prevent accidental disconnection of an energized plug. Some types of connectors are approved for hazardous areas such as coal mines or petrochemical plants, where flammable gas may be present.

Electrical wiring in the United Kingdom is commonly understood to be an electrical installation for operation by end users within domestic, commercial, industrial, and other buildings, and also in special installations and locations, such as marinas or caravan parks. It does not normally cover the transmission or distribution of electricity to them.

The Europlug is a flat, two-pole, round-pin domestic AC power plug, rated for voltages up to 250 V and currents up to 2.5 A. It is a compromise design intended to connect low-power Class II appliances safely to the many different forms of round-pin domestic power socket used across Europe. However, it is not compatible with the rectangular-pin BS 1363 sockets found in Cyprus, Gibraltar, Ireland, Malta and the United Kingdom. Europlugs are non-rewirable and must be supplied attached to a power cord.

As a former British colony and territory, technical standards in Hong Kong of today has been largely influenced by that of the United Kingdom, with some exceptions due to local and practical considerations.

The Kitemark is a UK product and service quality trade mark which is owned and operated by the British Standards Institution.

ISO 11170:2003 is an international standard which defines a sequence of tests for verifying filter elements. It can be used to check their hydraulic, mechanical and separation characteristics. ISO 11170 is not intended to qualify a filter for a particular duty or replicate conditions of service. This can only be done by a specific test protocol developed for the purpose, including actual conditions of use. The procedure in ISO 11170 is applicable to individual fluids, or types of fluid having similar chemistry.

PAS 78: Guide to good practice in commissioning accessible websites is a Publicly Available Specification published on March 8, 2006 by the British Standards Institution (BSI) in collaboration with the Disability Rights Commission (DRC). It provides guidance to organisations in how to go about commissioning an accessible website from a design agency. It describes what is expected from websites to comply with the UK Disability Discrimination Act 1995 (DDA), making websites accessible to and usable by disabled people

The British Standards Institution (BSI), is the national standards body of the United Kingdom. BSI produces technical standards on a wide range of products and services and also supplies certification and standards-related services to businesses.

BS 5400 was a British Standard code of practice for the design and construction of steel, concrete and composite bridges. It was applicable to highway, railway and pedestrian bridges. It has now been replaced by the European standard, BS EN 1991-2_2003 and other Eurocodes for the design of steel and concrete structures.

ISO/IEC 27001 is an international standard on how to manage information security. The standard was originally published jointly by the International Organization for Standardization (ISO) and the International Electrotechnical Commission(IEC) in 2005 and then revised in 2013. It details requirements for establishing, implementing, maintaining and continually improving an information security management system (ISMS) – the aim of which is to help organizations make the information assets they hold more secure. A European update of the standard was published in 2017. Organizations that meet the standard's requirements can choose to be certified by an accredited certification body following successful completion of an audit.

Plugs and sockets for electrical appliances not hardwired to mains electricity originated in Britain in the 1870s and were initially two-pin designs. These were usually sold as a mating pair, but gradually de facto and then official standards arose to enable the interchange of compatible devices. British standards have proliferated throughout large parts of the former British Empire.

British Standard 8878 is a Web Accessibility Code of Practice which was published by the BSI Group. The standard was officially launched on 7 December 2010.