The British Trust for Ornithology (BTO) is an organisation founded in 1932 for the study of birds in the British Isles.

In the United States, Hungary, Holland and elsewhere a clearing-house for research is provided by the state: in this country such a solution would be uncongenial, and we must look for some alternative centre of national scope not imposed from above but built up from below. An experiment on these lines has been undertaken at Oxford since the founding of the Oxford Bird Census in 1927 [...]. The scheme now has a full-time director, Mr W.B.Alexander. [...] It is intended to put this undertaking on a permanent footing and to build it up as a clearing-house for bird-watching results in this country.

This led to a meeting at the British Museum (Natural History) in February 1932, which in turn led to the foundation of an organisation to develop the Oxford scheme. The name British Trust for Ornithology was used from May 1933 and an appeal for funds was published in The Times on 1 July.

Max Nicholson was the first treasurer, Bernard Tucker the secretary. Harry Witherby was an early benefactor and vice-chairman.

Much has been discovered about birds by watching and counting them, but such methods rarely allow birds to be identified as individuals. This is essential if we are to learn about how long they live and when and where they move, questions that are vital for bird conservation. Placing a lightweight, uniquely numbered, metal ring around a bird's leg provides a reliable and harmless method of identifying birds as individuals. Each ring also has an address so that anyone finding a ringed bird can help by reporting where and when it was found and what happened to it. Some ringing projects also use colour rings to allow individual birds to be identified without being caught.

Birds have been ringed in Britain and Ireland for nearly 100 years, and ringing still reveals new facts about migration routes and wintering areas. However, the primary focus of the BTO's Ringing Schemes is now the monitoring of bird populations, to provide information on how many young birds leave the nest and survive to become adults, as well as how many adults survive the stresses of breeding, migration and severe weather. Changes in survival rates and other aspects of birds' biology can indicate the causes of population changes. This information is so important that the BTO runs two special projects to collect it. The Constant Effort Sites (CES) scheme provides information on population size, breeding success and survival of bird species living in scrub and wetland habitats. Ringers work at over 130 CES scheme sites each year. The Retrapping Adults for Survival (RAS) project gathers survival data for a wide range of species, particularly those of current conservation concern. Ringing revealed that declines in the number of Sedge Warblers breeding in Britain and Ireland was linked to lower levels of rainfall in their African wintering quarters; whilst the recent dramatic decline in the numbers of Song Thrushes was found to relate to a reduction in the survival rate of young birds. This information should aid identification of the environmental factors responsible for the decline.

In 1938 the BTO contributed funds to the new Edward Grey Institute of Field Ornithology.

In 1947, the institute became part of a new department of Zoological Field Studies at Oxford University, and the BTO again concentrated on a programme of volunteer-based surveys.

In December 1962, at the behest of Tony Norris, the BTO purchased Beech Grove, a large Victorian house in Tring, Hertfordshire, relocating there from Oxford, along with their Ringing Office, which had been at the British Museum.

In April 1991, the BTO moved to The Nunnery, Thetford, Norfolk, a large property lying between the A134 and the River Little Ouse, which had been donated to them. Parts of the medieval Benedictine Nunnery of St George can still be seen on this site.

The BTO also runs its only bird reserve, Nunnery Lakes Reserve, on this site. The reserve lies between the River Thet and the River Little Ouse, extending upstream from The Nunnery, along the banks of the Little Ouse, and incorporates several flooded gravel pits. [2]

In the early 2000s, a new library was created there, dedicated to the memory of Chris Mead. Professor Jeremy Greenwood PhD, who had been Director since 1988, retired in September 2007, and the current Director is Dr Andy Clements. [3]

The BTO carries out research into the lives of birds, chiefly by conducting population and breeding surveys and by bird ringing, largely carried out by a large number of volunteers. Its Garden Birdwatch survey, for example, allows large numbers of non-expert birdwatchers to participate, by making a weekly count of the birds they see in their gardens.

The BTO publishes a number of journals:

In September 1967, inspired by on-going work on the innovative Atlas of Breeding Birds of the West Midlands, produced by the West Midland Bird Club, and in partnership with the Irish Wildbird Conservancy (now BirdWatch Ireland), work began on the first Atlas of Breeding Birds in Britain and Ireland. 3,862 10 km squares were surveyed and the atlas was published in 1976.

The New Atlas (1993) updated and refined this huge survey, again with the help of IWC and the Scottish Ornithologists Club. A Winter Atlas and a Historical Atlas have also been published. The groundbreaking Migration Atlas presents the results of almost 100 years of bird ringing. As with all BTO studies, the vast majority of the fieldwork was undertaken by volunteers.

The Bird Atlas 2007–11, published November 2013, [4] combines breeding and winter surveys across the entire UK and Ireland, involving the BTO, Birdwatch Ireland, and the Scottish Ornithologist's Club, in order to produce a new atlas. Fieldwork began in winter 2007, and was due to continue until the end of 2011.

BirdTrack is an online citizen science website, operated by the BTO on behalf of a partnership of the BTO, the RSPB, BirdWatch Ireland, the Scottish Ornithologists' Club and the Welsh Ornithological Society (Welsh : Cymdeithas Adaryddol Cymru). [8] [9] 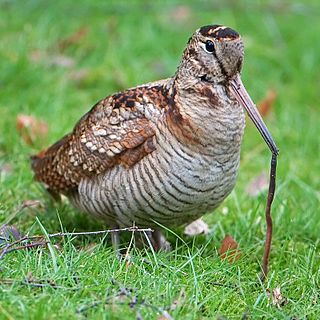 The Eurasian woodcock is a medium-small wading bird found in temperate and subarctic Eurasia. It has cryptic camouflage to suit its woodland habitat, with reddish-brown upperparts and buff-coloured underparts. Its eyes are set far back on its head to give it 360-degree vision and it probes in the ground for food with its long, sensitive bill, making it vulnerable to cold weather when the ground remains frozen.

The West Midland Bird Club is the UK's largest regional ornithological society. It has been serving birdwatchers and ornithologists in the four English counties of Staffordshire, Warwickshire, Worcestershire and the Metropolitan West Midlands, with lectures, field trips, research, a bulletin and an annual report, since 1929. It is a registered charity in England and Wales, number 213311.

The sedge warbler is an Old World warbler in the genus Acrocephalus. It is a medium-sized warbler with a brown, streaked back and wings and a distinct pale supercilium. Sedge warblers are migratory, crossing the Sahara to get from their European and Asian breeding grounds to spend winter in Africa. The male's song is composed of random chattering phrases and can include mimicry of other species. The sedge warbler is mostly insectivorous. 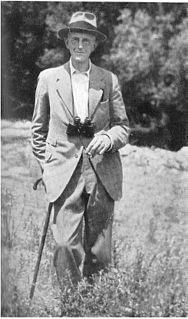 Christopher John (Chris) Mead was a popular British ornithologist, author and broadcaster, and an influential member of the British Trust for Ornithology (BTO). 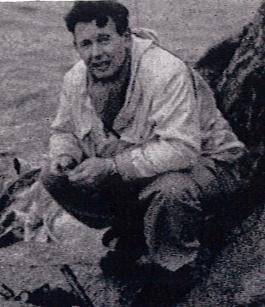 James Maxwell McConnell Fisher was a British author, editor, broadcaster, naturalist and ornithologist. He was also a leading authority on Gilbert White and made over 1,000 radio and television broadcasts on natural history subjects.

Jeremy John Denis Greenwood CBE is a British ornithologist and was Director of the British Trust for Ornithology (BTO) from 1988 until he retired in September 2007.

Dr Malcolm Alexander Ogilvie is a British ornithologist and freelance natural history author and consultant. One of his areas of expertise is wildfowl.

The Scottish Ornithologists' Club (SOC) is a Scottish ornithological body, founded in March 1936 at the premises of the Royal Scottish Geographical Society. As of 2008, the SOC has 2,200 members. The Club runs the Scottish Birds Records Committee, which maintains a list of birds recorded in Scotland. In 2007, the club was awarded the Silver Medal by the Zoological Society of London.

Peter Conder, OBE was a British ornithologist and conservationist known predominantly for his contribution as Director of the Royal Society for the Protection of Birds.

Professor David Norman is a British Chartered Physicist and ornithologist, he has lived in Cheshire since 1978.

Stanley Cramp was a British civil servant and ornithologist best known as the first Chief Editor of the encyclopaedic nine-volume handbook The Birds of the Western Palearctic (BWP).

The Devon Bird Watching & Preservation Society, also known as Devon Birds, is one of the UK's regional ornithological societies.

The Dilys Breese Medal is a medal awarded by the British Trust for Ornithology to recognise communicators who help to deliver ornithological science to new audiences. It is named in memory of film maker Dilys Breese, who died in 2007, and was inaugurated in 2009, funded by a bequest from Breese. The medal features a design by Robert Gillmor, showing a robin in front of a TV screen.

The Sussex Ornithological Society (SOS) is a British registered charity dedicated to the study, recording, and conservation of wild birds and their habitats in the English historic county of Sussex. It was founded in 1962 and is one of the largest county bird clubs in Great Britain with a membership of 1988 as at the end of financial year in December 2014. 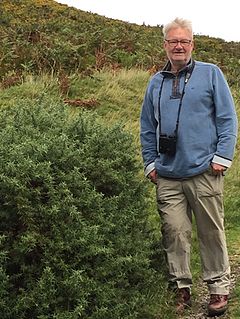 John Cragg Callion is an award-winning British ornithologist. His 25-year study of the European stonechat and his findings on the Eurasian dotterel have revealed much previously unknown information about both species.

Stephanie (Steph) Tyler is a British ornithologist, zoologist, naturalist, conservationist, and author from Monmouthshire. She is particularly known for her work on Dippers and the preservation of river habitats.