Carlos Antonio Huerta (born June 29, 1969) is an American former professional football player who was a placekicker in three different professional leagues. He played college football for the Miami Hurricanes, and was recognized as an All-American. Drafted in the twelfth round of the 1992 NFL Draft, he played in the National Football League (NFL), Canadian Football League (CFL) and Arena Football League.

He graduated from the university with a bachelor's degree in business administration, and was later inducted into the University of Miami Sports Hall of Fame. [3]

While at Miami, he was given the nickname "The Iceman" because of how cool he stayed no matter what the situation. [4]

Huerta joined the Las Vegas Posse, a Canadian Football League expansion franchise. He was one of the few notable players for the Posse, completing 38 of 46 field goal attempts, scoring 154 points. Following the season, he was the recipient of the Jackie Parker Trophy, and was the runner-up for the CFL's Most Outstanding Rookie Award. After the Las Vegas CFL franchise folded, he moved to the CFL's Baltimore Stallions, where he completed 57 field goals and scored 228 points, and was a key contributor to the Stallions' 1995 Grey Cup championship season. His 57 completed field goals remains the second highest season total in CFL history. [5]

The National Football League followed in 1996. Huerta played 3 games with the Chicago Bears in 96, hitting 4 of 7 field goals, and one game with the St. Louis Rams, scoring 2 extra points.

From 1998 to 2001 he played in the Arena Football League, with the Florida Bobcats in 1998 and the remainder with the San Jose SaberCats. He would connect on 37 of 85 field goals in the AFL. Also in 1998, Huerta appeared in a playoff game with the Toronto Argonauts of the Canadian Football League.

Huerta was interviewed about his time at the University of Miami for the documentary The U , which premiered December 12, 2009 on ESPN.

Wide Right I is the colloquial name for a 1991 college football game between the Miami Hurricanes and Florida State Seminoles. The game is one of the most significant in the history of the Florida State–Miami football rivalry, and its name is a reference to its dramatic ending: With 29 seconds remaining in the game, Florida State kicker Gerry Thomas missed a 34-yard potential game-winning field goal "wide to the right." It was the 26th meeting between the first- and second-ranked teams in the AP Poll and only the second between top-ranked teams from the same state.

The Florida–Miami football rivalry is an American college football rivalry between the Florida Gators football team of the University of Florida and Miami Hurricanes football team of the University of Miami. The game was played annually from 1944 until 1987, and is now played intermittently. The winning team was formerly awarded the Seminole War Canoe Trophy. Today, the round robin winner of the three biggest schools in the state of Florida receives the Florida Cup for beating the other two schools in the same season. Florida won the most recent game in 2019, 24–20. The two teams will have a home and home series in 2024 and 2025. Miami leads the series 29–27. 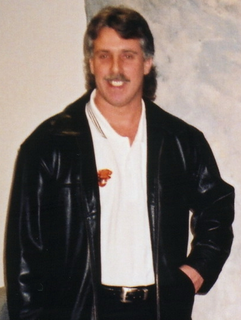 Charles William Tate was an American football player and coach. Tate served as the head coach of the University of Miami for six seasons during the 1960s and two games during the 1970 season.

The Miami Manatees was a proposed Canadian Football League (CFL) team scheduled to begin play in the 1996 season, and had plans to play out of the Miami Orange Bowl in Miami, Florida. After looking at a possible expansion franchise, the decision to relocate the Las Vegas Posse to Miami became the preferred choice to land a CFL team in Miami. The team never came to fruition as the CFL suspended its U.S. operations in spring 1996.

Jacory Sherrod Harris is a former Canadian football quarterback for the Montreal Alouettes of the Canadian Football League (CFL) and a current firefighter in Miami, FL. Harris started for Miami Northwestern High School during his last two years; he was unbeaten (30-0) and led the team to two state championships. In his senior year, Harris broke the state record for passing touchdowns and won the 2007 High School Football National Championship. He was named Florida's Mr. Football. During his freshman year of college in 2008 with the Miami Hurricanes, he split time with Robert Marve in a two-quarterback system. After the Emerald Bowl in late December, Marve transferred to Purdue, effectively making Harris the undisputed starter for the rest of his career as a Hurricane. He signed with the Philadelphia Eagles as an undrafted free agent in May 2012.

The 1992 Orange Bowl was the 58th edition of the college football bowl game, played at the Orange Bowl in Miami, Florida, on January 1. Part of the 1991–92 bowl game season, it matched the top-ranked Miami Hurricanes of the Big East Conference and the #11 Nebraska Cornhuskers of the Big Eight Conference. Favored Miami won 22–0.

The 1989 Orange Bowl was the 55th edition of the college football bowl game, played at the Orange Bowl in Miami, Florida, on Monday, January 2. Part of the 1988–89 bowl game season, it matched the independent and second-ranked Miami Hurricanes and the #6 Nebraska Cornhuskers of the Big Eight Conference. Favored Miami won 23–3.

Todd Michael Sievers is a former American football placekicker who played college football for the Miami Hurricanes from 1998 to 2002, being part of the 2001 Division I-A National Championship team.

Michael Badgley, nicknamed "The Money Badger", is an American football placekicker for the Los Angeles Chargers of the National Football League (NFL). He played college football at the University of Miami, and was signed as an undrafted free agent by the Indianapolis Colts in 2018.