The Centridini are a tribe of large apid bees, many of which possess adaptations for carrying floral oils rather than (or in addition to) pollen or nectar. The floral oils are often gathered from plants of the family Malpighiaceae, though other plants may be visited. The oil-collecting species typically have "combs" composed of closely spaced, flattened, blunt bristles on the margins of the first tarsal segments of the front and middle legs; others may have velvety "pads" to absorb the oils. They also commonly gather plant resins for use in nest cell construction. They have a tiny pterostigma in the forewing, the female scopa is very bushy, and the first flagellomere of the antenna is often longer than the scape.

Centris are commonly encountered bees in American deserts, and are active at very high ambient temperatures when many other species are in hiding. They can often be seen in large numbers on palo verde blossoms. A common example in Arizona is Centris pallida . [1]

Bees are flying insects closely related to wasps and ants, known for their role in pollination and, in the case of the best-known bee species, the western honey bee, for producing honey. Bees are a monophyletic lineage within the superfamily Apoidea. They are presently considered a clade, called Anthophila. There are over 16,000 known species of bees in seven recognized biological families. Some species – including honey bees, bumblebees, and stingless bees – live socially in colonies while most species (>90%) – including mason bees, carpenter bees, leafcutter bees, and sweat bees – are solitary.

The genus Centris contains circa 250 species of large apid bees occurring in the Neotropical and Nearctic realms, from Kansas to Argentina. Most females of these bees possess adaptations for carrying floral oils rather than pollen or nectar. They visit mainly plants of the family Malpighiaceae to collect oil, but also Plantaginaceae, Calceolariaceae, Krameriaceae and others. Recent studies have shown they are sister to the corbiculate bees, the most well-known and economically important group of bees

Anemophily or wind pollination is a form of pollination whereby pollen is distributed by wind. Almost all gymnosperms are anemophilous, as are many plants in the order Poales, including grasses, sedges, and rushes. Other common anemophilous plants are oaks, pecans, pistachios, sweet chestnuts, alders and members of the family Juglandaceae. Approximately 12% of plants across the globe are benefited by anemophily, including cereal crops like rice and corn and other prominent crop plants like wheat, rye, barley, and oats. In addition, many pines, spruces, and firs are wind-pollinated, and people rely on these hardwood trees for their survival. 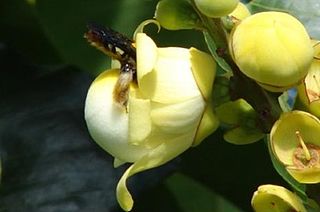 The genus Epicharis contains fewer than 40 species of large apid bees occurring in the Neotropics, most of which possess adaptations for carrying floral oils rather than pollen or nectar. The floral oils are typically gathered from plants of the family Malpighiaceae, though other plants may be visited. They also commonly gather plant resins for use in nest cell construction. Recent studies have shown they are sister to the clade formed by corbiculate bees plus Centris They are large bees, generally with a black head and mesosoma, and the metasoma is often red, and/or has bright yellow spots or bands. They are distinguished from the closely related genus Centris by two sets of three long, whip-like setae that project backwards from just behind the eyes. 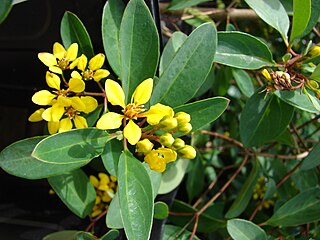 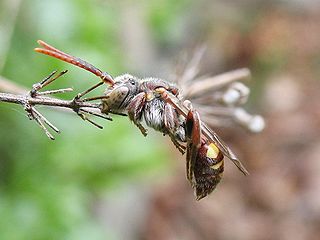 Nectar guides are markings or patterns seen in flowers of some angiosperm species, that guide pollinators to their rewards. Rewards commonly take the form of nectar, pollen, or both, but various plants produce oil, resins, scents, or waxes. Such patterns also are known as "pollen guides" and "honey guides", though some authorities argue for the abandonment of such terms in favour of floral guides. Pollinator visitation can select for various floral traits, including nectar guides through a process called pollinator-mediated selection.

A flower, sometimes known as a bloom or blossom, is the reproductive structure found in flowering plants. The biological function of a flower is to facilitate reproduction, usually by providing a mechanism for the union of sperm with eggs. Flowers may facilitate outcrossing resulting from cross pollination or allow selfing when self pollination occurs.

The bee tribe Ctenoplectrini of the subfamily Apinae, with the two genera Ctenoplectra and Ctenoplectrina, comprises 9 species in tropical Africa, 10 in Asia, and 1 in Australia. 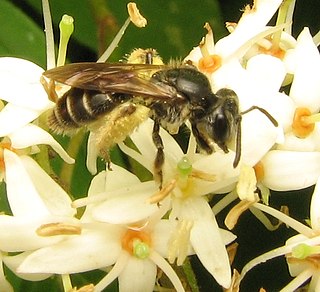 The term oligolecty is used in pollination ecology to refer to bees that exhibit a narrow, specialized preference for pollen sources, typically to a single family or genus of flowering plants. The preference may occasionally extend broadly to multiple genera within a single plant family, or be as narrow as a single plant species. When the choice is very narrow, the term "monolecty" is sometimes used, originally meaning a single plant species, but recently broadened to include examples where the host plants are related members of a single genus. The opposite term is polylectic, and refers to species that collect pollen from a wide range of species. The most familiar example of a polylectic species is the domestic honey bee.

The Anthophorini are a large tribe in the subfamily Apinae of the family Apidae. Species in this tribe are often referred to as digger bees, although this common name is sometimes also applied to members of the tribe Centridini. It contains over 750 species worldwide, all of which were previously classified in the obsolete family Anthophoridae along with members of several other tribes; the vast majority of species in the tribe Anthophorini are in the genera Amegilla and Anthophora.

Melittinae is a small melittid subfamily, with some 60 species in four genera, restricted to Africa and the northern temperate zone. They are typically small to moderate-sized bees, which often have shaggy scopae, and are commonly oligolectic; several species further specialize on floral oils as larval food rather than pollen, including Rediviva emdeorum, a highly unusual species in which the forelegs are longer than the entire body, and used to sponge up the floral oil at the end of elongated corolla spurs of the host plant, Diascia. 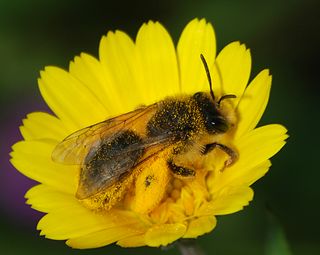 The Andrenidae are a large, nearly cosmopolitan family of solitary, ground-nesting bees. Most of the family's diversity is located in temperate or arid areas. It includes some enormous genera. One of the subfamilies, Oxaeinae, is so different in appearance that they were typically accorded family status, but careful phylogenetic analysis reveals them to be an offshoot within the Andrenidae, very close to the Andreninae. 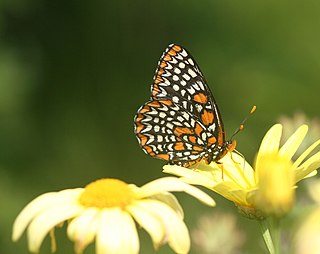 Pollination syndromes are suites of flower traits that have evolved in response to natural selection imposed by different pollen vectors, which can be abiotic or biotic, such as birds, bees, flies, and so forth through a process called pollinator-mediated selection. These trait includes flower shape, size, colour, odour, reward type and amount, nectar composition, timing of flowering, etc. For example, tubular red flowers with copious nectar often attract birds; foul smelling flowers attract carrion flies or beetles, etc.

Andrena, commonly called the mining bee, is the largest genus in the family Andrenidae, and is nearly worldwide in distribution, with the notable exceptions of Oceania and South America. With over 1,300 species, it is one of the largest of all bee genera. Species are often brown to black with whitish abdominal hair bands, though other colors are possible, most commonly reddish, but also including metallic blue or green. 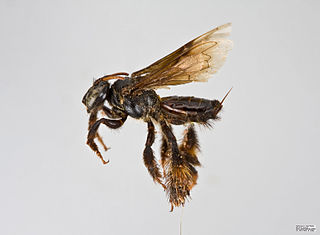 The genus Tetrapedia contains approximately 13 species of small apid bees occurring in the Neotropics, and they are unusual in possessing adaptations for carrying floral oils rather than pollen or nectar. The floral oils are typically gathered from plants of the family Malpighiaceae, though other plants may be visited. They also apparently gather plant resins for use in nest cell construction, sometimes mixed with sand. 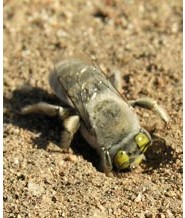 Centris pallida is a species of solitary bee native to North America. It lacks an accepted common name; however, it has been called the digger bee, the desert bee, and the pallid bee due to its actions, habitat, and color respectively. The solitary nature of this bee allows for a dual-strategy mating system which produces an evolutionarily stable state resistant to invading strategies. These bees have also evolved to withstand the high temperatures of their native habitat. C. pallida routinely has internal temperatures within 3 degrees Celsius of death.