Coat of arms of Melilla

The coat of arms of Melilla is that of the Ducal House of Medina Sidonia, whose titular funded the military operation that seized Melilla in 1497. [1]

The crown is topped by a turret, with a male figure throwing a dagger (Guzmán el Bueno, ancestor of the first duke) in chief. [2] The top part of the coat of arms reads Præferre Patriam Liberis Parentem Decet (Latin: "It is seemly for a parent to put his fatherland before his children"), also a nod to the Guzmán el Bueno's role during the 1296 defence of Tarifa on behalf of Sancho IV of Castile. The supporters are the Pillars of Hercules and read Non Plus Ultra (Latin: "Nothing further beyond").

It is the central device of the flag of Melilla.

In January 1913, the Captain-General of Melilla Francisco Gómez Jordana  [ es ] requested the House of Medina Sidonia the permission to negotiate with the Government the use of the Ducal arms as coat of arms of the city. [3] The coat of arms was granted through a Royal Decree issued in March 1913 by Alfonso XIII. [3] 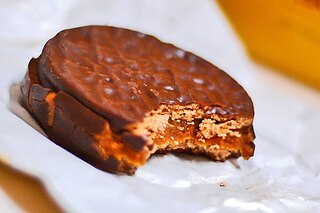 An alfajor or alajú is a traditional confection found in Argentina, Bolivia, Chile, Colombia, Ecuador, Paraguay, Peru, the Philippines, Southern Brazil, Southern France, Spain, Uruguay, and Venezuela. The archetypal alfajor entered Iberia during the period of al-Andalus. It is produced in the form of a small cylinder and is sold either individually or in boxes containing several pieces.

Medina Sidonia is a city and municipality in the province of Cádiz in the autonomous community of Andalusia, southern Spain. It is considered by some to be the oldest city in Europe, used as a military defense location due to its elevated location. Locals are known as Asidonenses. The city's name comes from Medina and Sidonia, meaning "City of Sidon". 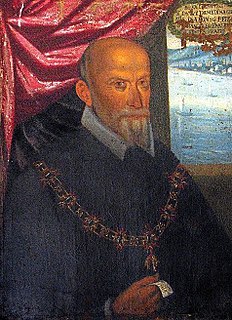 Alonso Pérez de Guzmán y de Zúñiga-Sotomayor, 7th Duke of Medina Sidonia, GE, was a Spanish aristocrat who was most noted for his role as commander of the Spanish Armada that was to attack the south of England in 1588.

Duke of Medina Sidonia is a peerage grandee title of Spain in Medina-Sidonia, holding the oldest extant dukedom in the kingdom, first awarded by King John II of Castile in 1380. They were once the most prominent magnate family of the Andalusian region, the best-known of whom, Don Alonso de Guzmán El Bueno, 7th Duke of Medina Sidonia, commanded the Spanish Armada at the end of the 16th century. The defeat at the hands of weather and the English in 1588 brought disgrace to this family. The House of Medina Sidonia traces its descent from Alonso Pérez de Guzmán. 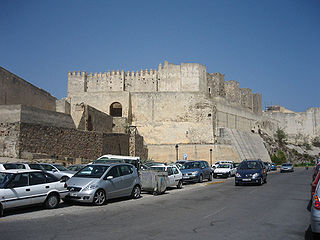 The Castle of Tarifa, also known as Castle of Guzmán el Bueno or Castle of the Guzmáns is a castle in the coastal town of Tarifa in Spain. 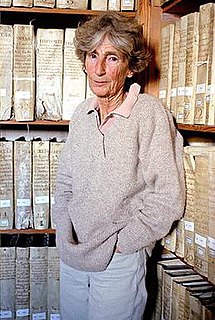 Luisa Isabel Alvarez de Toledo y Maura, 21st Duchess of Medina Sidonia, GE was the holder of the Dukedom of Medina Sidonia in Spain. She was nicknamed La Duquesa Roja or The Red Duchess due to her lifelong left-wing, anti-Francoist, pro-democracy political activism. 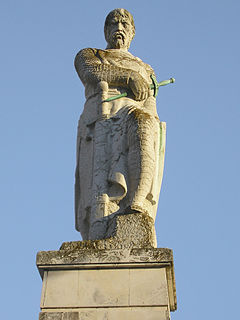 Alonso Pérez de Guzmán (1256–1309), known as Guzmán el Bueno, was a Spanish nobleman and hero of Spain during the medieval period, the founder of the line from which the dukes of Medina Sidonia descend.

Zahara de los Atunes is a village on the Costa de la Luz of Spain in the province of Cádiz and the autonomous region of Andalusia. It is noted for its excellent beaches, an outdoor cinema, and la Iglesia Del Carmen church where, curiously, tuna were butchered and salted. Also in the town are excellent facilities including a variety of restaurants, cafes and hotels.

Jaime of Braganza was the 4th Duke of Braganza and the 2nd Duke of Guimarães, among other titles. He is known for reviving the wealth and power of the House of Braganza which had been confiscated by King John II of Portugal.

Pedro Téllez-Girón, 1st Duke of Osuna, 5th count of Ureña was a Spanish nobleman and administrator.

The Andalusian independentist conspiracy in 1641 was an alleged conspiracy of Andalusian nobility for Andalusia to secede from Spain. The conspiracy was brought to an end in summer 1641 after the plans of rebellion were discovered.

The Conquest of Melilla occurred in September 1497, when a fleet sent by the Duke of Medina Sidonia seized the north African city of Melilla.

The Ninth Siege of Gibraltar was a fifteen-month-long siege of the town of Gibraltar that lasted from 1466 until 1467. The siege was conducted by Juan Alonso de Guzmán, the 1st Duke of Medina Sidonia, and resulted in a takeover of the town, then belonging to the Crown of Castile. Unlike other sieges of Gibraltar, which were the result of clashes between different powers, this was a purely internal struggle between rival Castilian factions.

Juan Alonso Pérez de Guzmán y Coronel (1285-1351), second lord of Sanlúcar, was a Castilian noble of the house of Medina Sidonia. He was the son of Alonso Pérez de Guzmán and María Alfonso Coronel. He defeated the troops of the King of Portugal in the Battle of Villanueva de Barcarrota (1336). He died in 1351.

Cazaza was a Spanish enclave on the western coast of Cape Three Forks, in what is today Morocco, around 18 km from Melilla. It was here that the exiled Boabdil, last Emir of Granada, landed when he left the Iberian Peninsula in 1492.

The House of Guzmán is an old and noble Spanish family that emerged in Castile in the 12th century and became one of the most prominent dynasties of the Spanish kingdom until the 18th century. The original family gave rise to several branches, one of which became Dukes of Medina Sidonia from the 15th century to the 18th century, in turn giving rise to other branches including the Count-Dukes of Olivares.

José Marina Vega (1850–1926) was a Spanish military officer and politician. Leader of the military operations in Melilla during the 1909 Melilla Campaign, he later served as High Commissioner of Spain in Morocco (1913–1915) and as Minister of War.