Connie Booth (born 2 December 1940 [1] [lower-alpha 1] ) is an American-born actress and writer. She has appeared in several British television programmes and films, including her role as Polly Sherman on BBC2's Fawlty Towers , which she co-wrote with her then-husband John Cleese. In 1995 she quit acting and worked as a psychotherapist until her retirement.

Booth was born in Indianapolis, Indiana, on 2 December 1940. Her father was a Wall Street stockbroker and her mother an actress. The family later moved to New York State. [5] [6] Booth entered acting and worked as a Broadway understudy and waitress. She met John Cleese while he was working in New York City; [6] they married on February 20, 1968. [7]

Booth secured parts in episodes of Monty Python's Flying Circus (1969–74) and in the Python films And Now for Something Completely Different (1971) and Monty Python and the Holy Grail (1975, as a woman accused of being a witch). She also appeared in How to Irritate People (1968), a pre-Monty Python film starring Cleese and other future Monty Python members; a short film titled Romance with a Double Bass (1974) which Cleese adapted from a short story by Anton Chekhov; and The Strange Case of the End of Civilization as We Know It (1977), Cleese's Sherlock Holmes spoof, as Mrs. Hudson.

Booth and Cleese went on to co-write and co-star in Fawlty Towers (1975 and 1979), in which she played waitress and chambermaid Polly. For thirty years Booth declined to talk about the show until she agreed to participate in a documentary about the series for the digital channel Gold in 2009. [8]

Booth played various roles on British television, including Sophie in Dickens of London (1976), Mrs. Errol in a BBC adaptation of Little Lord Fauntleroy (1980) and Miss March in a dramatisation of Edith Wharton's The Buccaneers (1995). She also starred in the lead role of a drama called The Story of Ruth (1981), in which she played the role of the schizophrenic daughter of an abusive father, for which she received critical acclaim. In 1994, she played a supporting role in "The Culex Experiment", an episode of the children's science fiction TV series The Tomorrow People .

She also had a stage career, primarily in the London theatre, appearing in 10 productions from the mid-1970s through the mid-1990s, [9] notably starring with Sir John Mills in the 1983–1984 West End production of Little Lies at Wyndham's Theatre.

Booth ended her acting career in 1995. [6] After studying for five years at London University, [5] she began a career as a psychotherapist, registered with the British Psychoanalytic Council. [5] [6] [10]

In 1971, Booth and Cleese had a daughter, Cynthia, [5] who appeared alongside her father in the films A Fish Called Wanda and Fierce Creatures . Booth and Cleese divorced in 1978. [2] With Cleese, Booth wrote the scripts for and co-starred in both series of Fawlty Towers, although the two were actually divorced before the second series was finished and aired. Booth's daughter Cynthia married screenwriter Ed Solomon in 1995. [11] [12] 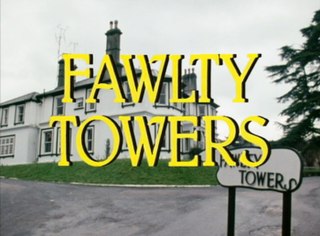 John Marwood Cleese is an English actor, comedian, screenwriter, and producer. Emerging from the Cambridge Footlights in the 1960s, he first achieved success at the Edinburgh Festival Fringe and as a scriptwriter and performer on The Frost Report. In the late 1960s, he co-founded Monty Python, the comedy troupe responsible for the sketch show Monty Python's Flying Circus. Along with his Python co-stars Terry Gilliam, Eric Idle, Terry Jones, Michael Palin and Graham Chapman, Cleese starred in Monty Python films, which include Monty Python and the Holy Grail (1975), Life of Brian (1979) and The Meaning of Life (1983). 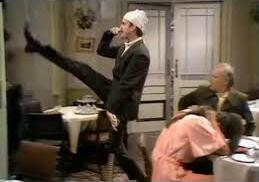 "The Germans" is the sixth episode of the BBC sitcom Fawlty Towers. In the episode, while suffering the effects of concussion, Basil Fawlty repeatedly offends some German guests. Despite warning his staff "Don't mention the war", he keeps ignoring his own advice. His insults culminate in a goose-stepping impersonation of Adolf Hitler.

"Gourmet Night" is the fifth episode in the first series of the BBC TV sitcom Fawlty Towers.

Charles McKeown is a British actor and writer, perhaps best known for his collaborations with Terry Gilliam. The two met while shooting Monty Python's Life of Brian, while McKeown was doing bit parts in the film.

Payne is a 1999 American sitcom adapted from the 1970s British television comedy Fawlty Towers. This adaptation, which was a mid-season replacement on CBS, originally aired from March 15 to April 28, 1999. It costars John Larroquette, who was also an executive producer for the series, and JoBeth Williams. Featured too as regular supporting characters are Julie Benz and Rick Batalla. Despite receiving the blessing of John Cleese, who reportedly agreed to be an "irregular cast member" and perform in a recurring role as a rival hotelier if Payne were renewed, the series was cancelled following the broadcast of its eighth episode. A total of nine episodes were filmed, but one was not aired as part of the series' original presentation on CBS.

Basil Fawlty is the main character of the 1970s British sitcom Fawlty Towers, played by John Cleese. The proprietor of the hotel Fawlty Towers, he is a cynical and misanthropic snob, desperate to belong to a higher social class. His attempts to run the hotel often end in farce. Possessing a dry, sarcastic wit, Basil has become an iconic British comedy character who remains widely known to the public despite only 12 half-hour episodes ever having been made. In a 2001 poll conducted by Channel 4 Basil was ranked second on their list of the 100 Greatest TV Characters.

"The Builders" is the second episode in the six-episode first series of the BBC TV sitcom Fawlty Towers.

"Communication Problems" is the first episode of the second series of BBC sitcom Fawlty Towers and the seventh episode overall. It is also known as '"Mrs Richards".

"The Anniversary" is the fifth episode of the second series of BBC sitcom Fawlty Towers. 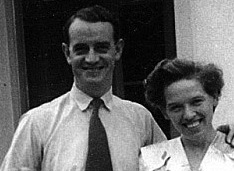 Donald William Sinclair was the co-proprietor of the Gleneagles Hotel in Torquay, England. He helped manage the hotel after an extensive career as an officer in the Merchant Navy and the Royal Navy. During the Second World War, Sinclair twice survived the sinking of the ships on which he was serving. 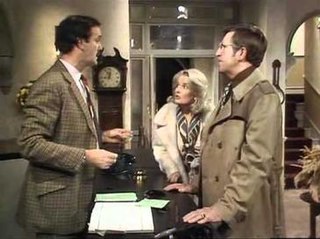 "Waldorf Salad" is the third episode of the second series of the BBC sitcom Fawlty Towers. Directed by Bob Spiers, it first aired on 5 March 1979.

"The Kipper and the Corpse" is the fourth episode of the second series of the British sitcom Fawlty Towers. It first aired at 9.00pm on 12 March 1979 on BBC2. Distinguishing it from other episodes is its heavy use of black comedy.

Edward James Solomon is an American writer, producer and director. He is best known for writing the screenplays to Bill & Ted's Excellent Adventure (1989), Men in Black (1997), and Now You See Me (2013).

Romance with a Double Bass is a 1974 British short comedy film directed by Robert Young. It was adapted by Young, John Cleese and Connie Booth (uncredited) from a screenplay by Bill Owen that was originally based on the short story of the same name by Anton Chekhov. It stars Cleese and his then wife Connie Booth in the leading roles.

Polly Sherman is a fictional character in the BBC sitcom Fawlty Towers. Played by Connie Booth, she is Fawlty Towers' long-suffering waitress and hotel maid. 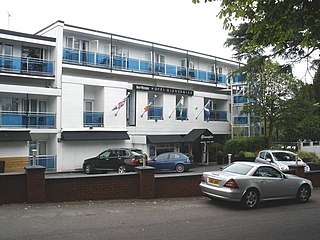 The Gleneagles Hotel was a hotel in Torquay, Devon, England. The 41-bed establishment, which opened in the 1960s, was the inspiration for Fawlty Towers, a British situation comedy first broadcast in the mid-1970s. John Cleese, and his then wife Connie Booth, were inspired to write the series after they had stayed at the hotel and witnessed the eccentric behaviour of its owner, Donald Sinclair. Later the hotel was managed by Best Western. In February 2015 the hotel closed. It will be replaced by retirement apartments. 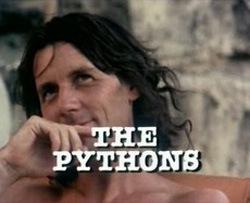 The Pythons is a BBC documentary film about the Monty Python team which was shot in Tunisia in 1978, during the making of Monty Python's Life of Brian. As well as promoting their upcoming film, the documentary also serves as a tenth anniversary profile of the team, despite the original broadcast date of 20 June 1979 being some months ahead of both the tenth anniversary of their TV debut and the UK release of their new film.