The economic, political and social crises of contemporary France -terrorism, violence, immigration, unemployment, racism, etc.—and (for some) the notion that France has lost its sense of identity and international prestige—through the rise of American hegemony, the growth of Europe and of global capitalism (French : mondialisation)—have created what some critics (like Nancy Huston) have seen as a new form of detached nihilism, reminiscent of the 50s and 60s (Beckett, Cioran). The best known of these authors is Michel Houellebecq, whose Atomised (French : Les particules élémentaires) was a major international phenomenon. These tendencies have also come under attack. In one of her essays, Nancy Huston criticises Houellebecq for his nihilism; she also makes an acerbic censure of his novels in her work The teachers of despair (French : Professeurs de désespoir).[ citation needed ]

Although the contemporary social and political context can be felt in recent works, overall, French literature written in past decades has been disengaged from explicit political discussion (unlike the authors of the 1930s–1940s or the generation of 1968) and has focused on the intimate and the anecdotal.[ citation needed ] It has tended to no longer see itself as a means of criticism or world transformation, with some notable exceptions (such as Michel Houellebecq or Maurice Dantec).[ citation needed ]

Other contemporary writers during the last decade have consciously used the process of "autofiction" (similar to the notion of "faction") to renew the novel (Christine Angot for example). "Autofiction" is a term invented by Serge Doubrovsky in 1977. It is a new sort of romanticised autobiography that resembles the writing of the romantics of the nineteenth century. A few other authors may be perceived as vaguely belonging to this group: Alice Ferney, Annie Ernaux, Olivia Rosenthal, Anne Wiazemsky, and Vassilis Alexakis. In a related vein, Catherine Millet's 2002 memoir The Sexual Life of Catherine M. gained much press for its frank exploration of the author's sexual experiences.[ citation needed ]

Many of the most lauded works in French over the last decades have been written by individuals from former French colonies or overseas possessions. This Francophone literature includes the novels of Ahmadou Kourouma (Côte d'Ivoire), Tahar ben Jelloun (Morocco), Patrick Chamoiseau (Martinique), Amin Maalouf (Lebanon), Mehdi Belhaj Kacem (Tunisia) and Assia Djebar (Algeria).

This term was used for the first time by French writer Michel Chaillou in 1989[ citation needed ]. This simple and convenient definition hides a complex and chaotic literary situation, both from the chronological point of view (the temporal boundaries of the extrême contemporain are in continuous shifting) and for the hetereogeneity of present French literary production, which cannot be defined in a clear and homogeneous way. The term extrême contemporain, therefore, is all-inclusive. The literary production of this period is characterized by a transitory quality; because of the manifolded nature of such an immense corpus of texts, the identification of specific tendencies is inevitably partial and precarious.

Therefore, to define the extrême contemporain as a literary movement would be very improper: it is a mere term of convenience used by commentators and not by the authors themselves.

The extrême contemporain can be seen as a "literary constellation" hardly organized in schemes. In some cases, authors of the extrême contemporain follow an "aesthetics of fragments": their narration is broken into pieces or they show, like Pascal Quignard, for instance, a preference for short sentences. The "apportionment" of knowledge can also be carried out by the use of a chaotic verbal stream, the interior monologue, tropisms, repetition and endophasy. The feeling of uncertainty experience by writers leads him to put in question the notion of novel and its very form, preferring the more general notion of récit. Then, a return to reality takes place: in Pierre Bergounioux's works, readers witness the cultural upsetting concerning generations which follow one another; François Bon describes the exclusion from social and industrial reality; many authors of crime stories, like Jean-Patrick Manchette and Didier Daeninckx, describe social and political reality, and so it does Maurice G. Dantec in his works halfway between spy stories and science fiction; on another side, Annie Ernaux's écriture plate ("flat writing") tries to demolish the distance between reality and its narration.

Subjects are shown in a persistent state of crisis. However, a return to everyday life and trivial habits also takes place: the attention is focused to the "outcasts of literature", like, for instance, old people. This use of triviality and everyday life expresses itself in a new sort of "minimalism": from Pierre Michon's Small lives fictional biographies of unknown people, to Philippe Delerm's "small pleasures". The facets of this minimalism manifest themselves in many ways, through the triviality of the subject, through short forms, or through concise and bare phrases. On one hand, heroicized characters try to build up their own individual way against a senseless reality, so that emarginated or marginal people emerge through the building up of their own story; on the other hand, a "negative minimalism" takes place: characters stagnate in social and relational difficulties. 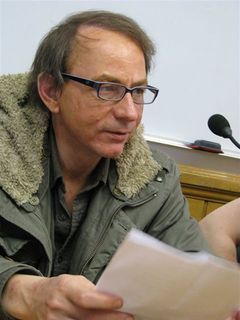 Michel Houellebecq ; born Michel Thomas; 26 February 1956 or 1958) is a French author, known for his novels, poems and essays, as well as an occasional actor, filmmaker and singer. 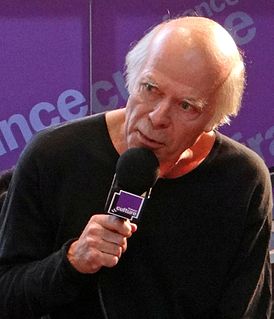 The Prix Décembre, originally known as the Prix Novembre, is one of France's premier literary awards. It was founded under the name Prix Novembre in 1989 by Philippe Dennery. In 1998, the founder resigned after he disapproved awarding of the prize to Michel Houellebecq's novel Atomised. The prize then got a new patron – Pierre Bergé – and a new name: Prix Decembre.

Annie Ernaux is a French writer. 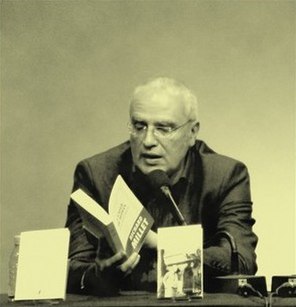 Richard Millet is a French author.

Pierre Bergounioux is a French writer. He won the 1986 Prix Alain-Fournier for his second novel, Ce pas et le suivant. And in 2002, he won the SGDL literary grand prize for his body of work.

The Prix Alain-Fournier is a French literary prize, awarded by the town of Saint-Amand-Montrond in honour of Alain-Fournier, author of Le Grand Meaulnes. It is intended to give encouragement to a novelist at the beginning of their career, and it can be awarded for first, second or third novels, provided that the author has not previously received any recognition at a national level.

The Map and the Territory is a novel by French author Michel Houellebecq. The narrative revolves around a successful artist, and involves a fictional murder of Houellebecq. It was published on 4 September 2010 by Flammarion and received the Prix Goncourt, the most prestigious French literary prize, in 2010. The title is a direct quote from Jean Baudrillard's text "Simulacra and Simulation", which itself refers to the Jorge Luis Borges short story "On Exactitude in Science".

Philippe Rahmy was a Swiss poet and writer.

The Prix de la langue française is chronologically the first grand prix of the literary season in France.

The prix Roger Caillois is an annual literary prize established in 1991 in partnership with the PEN Club in France and the Maison de l'Amérique latine as well as the Society of readers and friends of Roger Caillois, awarded to both a Latin American and a French author. Since 2007, the prix Roger Caillois for essay comes in addition to these two prizes.

Hédi Kaddour is a French poet and novelist.

The grand prix de littérature de la SGDL is a French literary prize created by the Société des gens de lettres in 1947 in order to reward an author for the whole of his work, and which is given during the spring session of the society.

Pierre Bourgeade was a French man of letters, playwright, poet, writer, director, journalist, literary critic and photographer. A descendant of Jean Racine, he was also the brother-in-law of the writer Paule Constant.

Michel Caffier is a French journalist, writer and literary critic. He is the author of an abundant work centered on Lorraine: historical novels, essays and reference works, including the Dictionnaire des littératures de Lorraine.