Cookhouse is situated in Greater Addo, in the Eastern Cape, South Africa. Cookhouse was an early colonial settlement. The Scottish abolitionist and poet, Thomas Pringle mentions Cookhouse in his journal. The town was also visited by early explorers and writers such as Dutch military commander Robert Jacob Gordon and French traveller François Levaillant. Gordon's stay in South Africa produced scientific writings, drawings and maps about the region. [2]

The town is home to the Cookhouse Wind Farm which comprises 66 turbines. The farm became operational in November 2014 and supplies clean energy to Cookhouse, Adelaide, Somerset East and Bedford. [3]

The Great Fish River formed the eastern boundary of the Cape Colony until 1819. The current village is said to take its name from a small stone house used for shelter and cooking by troops camping on the bank of this river. Another explanation links the name to the hot climate as experienced by the troops stationed there. [4]

The Cookhouse is located on what was the Roodewal farm owned by Frans Johannes van Aardt in the 1770s. He was born on 12 September 1777 in Somerset East and died in 1856. Frans Johannes van Aardt was married twice; first to Susanna Wilhelmina Tregardt on 21 October 1798. She died in 1825 aged 27. [5] This small town got its name is in the late 1790s because Susanna van Aardt supplied provisions from her "cookhouse" (or outdoor kitchen) to riders and soldiers waiting to cross the Great Fish River. After her death, Frans Johannes married Maria Johanna Mentz in 1826.

In the 1870s, the government of Prime Minister John Molteno oversaw a massive expansion of the Cape Colony's railway system, and a route northwards to De Aar from Port Elizabeth and Port Alfred was chosen by the Cape Government Railways to pass through what is now Cookhouse. A station was built here, which became an important railway junction, and a small settlement formed around this connection. [6]

The following lists events that happened during 1903 in South Africa.

The R63 is a tarred provincial route in South Africa that connects Calvinia with Komga via Carnarvon, Victoria West, Graaff-Reinet, Somerset East and King William's Town. It is cosigned with the N10 between Eastpoort and Cookhouse for 24 kilometres.

Cradock is a town in the Eastern Cape Province of South Africa, in the upper valley of the Great Fish River, 250 kilometres (160 mi) by road northeast of Port Elizabeth. The town is the administrative seat of the Inxuba Yethemba Local Municipality in the Chris Hani District of the Eastern Cape. The estimated population in 2015 was 35,000.

Lourens Jacobus (Louw) Wepener was born on 21 July 1812. He was the son of a German immigrant – Frederick Jacobus Wepener – and a Cape Colony woman – Johanna Maria Erasmus. Wepener was born in Graaf-Reinet and lived with his uncle – Lourens. He was christened by Reverend Andrew Murray of the Dutch Reformed Church. Wepener was first married to Hester Susanna Nel and then later to Hilletje Maria Levina Van Aardt. He had nine children with his second wife. 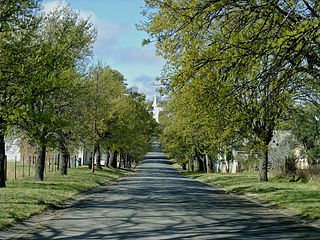 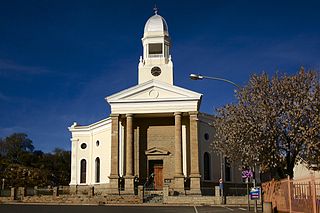 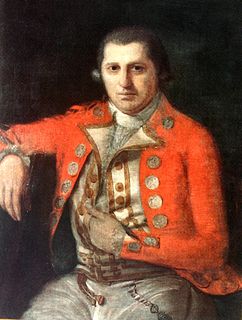 Döhne is a South African agricultural research station 6 kilometres north of Stutterheim in the Eastern Cape. It is noted for having developed the Döhne Merino from Peppin Merino ewes and German mutton merino sires in 1939. The program bred for high fertility, rapid lamb growth and fine wool production under pastoral conditions. The breed was introduced to Australia in 1998. 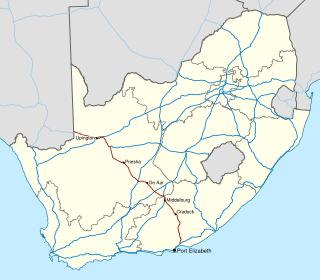 The N10 is a national route in South Africa connecting Port Elizabeth on the Eastern Cape coast with the Namibian border at Nakop, via Cradock, De Aar and Upington.

Cornelis Frederik Bezuidenhout was a frontier farmer in the eastern Cape Colony whose death in a skirmish with Hottentot soldiers, who had been sent to arrest him, was the origin of the Slagtersnek Rebellion which reached its dramatic finale on 9 March 1816 under the gallows at Van Aardspos, twelve miles south of Slagtersnek.

The Slachter's Nek Rebellion was an uprising by Boers in 1815 on the eastern border of the Cape Colony.

Bruintjieshoogte Pass, is a mountain pass situated in the Eastern Cape province of South Africa, on the Regional road R63, between Somerset East and Pearston.

Daggaboers Nek Pass, also known simply as Daggaboers Nek, is situated in the Eastern Cape province of South Africa, on the N10 national route, between Cookhouse and Cradock. The tarred pass has a northern and southern approach, with double lanes on both ascents. 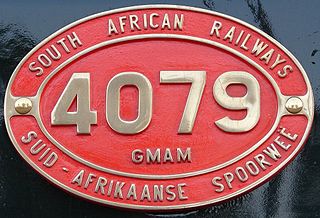 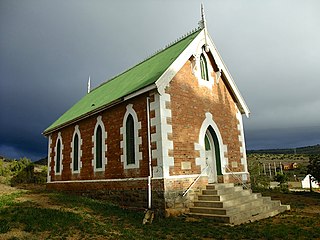 Michiel van Breda (1775-1847) was a South African farmer, founder of Bredasdorp, Mayor of Cape Town and a Freemason.