Last updated May 30, 2021
For other uses, see Crowd control (disambiguation).

Crowd control is a public security practice where large crowds are managed to prevent the outbreak of crowd crushes, affray, fights involving drunk and disorderly people or riots. Crowd crushes in particular can cause many hundreds of fatalities. [1] Effective crowd management is about managing expected and unexpected crowd occurrences. [2] Crowd control can involve privately hired security guards as well as police officers. Crowd control is often used at large, public gatherings like street fairs, music festivals, stadiums and public demonstrations. At some events, security guards and police use metal detectors and sniffer dogs to prevent weapons and drugs being brought into a venue. [3] [4] [5] [6]

Materials such as stanchions, [7] crowd control barriers, [8] fences and decals painted on the ground can be used to direct a crowd. A common method of crowd control is to use high visibility fencing to divert and corral pedestrian traffic to safety when there is any potential threat for danger. [9] Keeping the crowd comfortable and relaxed is also essential, so things like awnings, cooling fans (in hot weather), and entertainment are sometimes used as well. Thus, restrictive measures and the application of force can actually make crowding more dangerous, for instance during the Hillsborough disaster. [10] For controlling riots and demonstrations, see riot control.

Specific products that are used to implement line management and public guidance in high traffic areas include retractable belt systems (which incorporate a stanchion post and the retractable tape) and wall mount systems (also incorporating a retractable belt but are surface mounted). Post and rope systems are also popular, especially in banks and theaters. [11]

The history of crowd control starts back in the 1920s, where there was no official crowd control unit. There would be ten to 20 officers lined up. Behind one line there would be another line about twenty feet back. The officers were armed with batons and axe handles. Their job is to simply hold the crowd back, which would end in a free for all and resulting in multiple officer injuries. [12]

The 1960s and 1970s marked the invention and widespread use of the tear gas. However, with this new innovation the officers were not used to operating in an environment where visibility was limited. The armor that they wore at the time was not as mobile. This resulting in that type of armor being rarely used. [12]

A crowd controller is also another name for a bouncer [13] or doorman. [14]

The Hillsborough disaster was a fatal human crush during a football match at Hillsborough Stadium in Sheffield, South Yorkshire, England, on 15 April 1989. It occurred during an FA Cup semi-final between Liverpool and Nottingham Forest in the two standing-only central pens in the Leppings Lane stand allocated to Liverpool supporters. Shortly before kick-off, in an attempt to ease overcrowding outside the entrance turnstiles, the police match commander David Duckenfield ordered exit gate C opened, leading to an influx of even more supporters to the pens. This led to a crowding in the pens and the crush. With 96 deaths and 766 injuries, it has the highest death toll in British sporting history. Ninety-four people died on the day; another person died in hospital days later and the final victim, Tony Bland, who had been put into a persistent vegetative state by the crush and had never regained consciousness, died in 1993. The match was abandoned but was restaged at Old Trafford in Manchester on 7 May 1989 with Liverpool winning and going on to win the FA Cup. 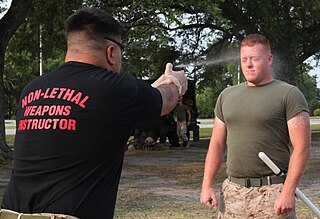 Non-lethal weapons, also called less-lethal weapons, less-than-lethal weapons, non-deadly weapons, compliance weapons, or pain-inducing weapons are weapons intended to be less likely to kill a living target than conventional weapons such as knives and firearms with live ammunition. It is often understood that unintended or incidental casualties are risked wherever force is applied, but non-lethal weapons try to minimise the risk of casualties as much as possible. Non-lethal weapons are used in policing and combat situations to limit the escalation of conflict where employment of lethal force is prohibited or undesirable, where rules of engagement require minimum casualties, or where policy restricts the use of conventional force. These weapons occasionally cause serious injuries or death; the term "less-lethal" has been preferred by some organizations as it describes the risks of death more accurately than the term "non-lethal", which some have argued is a misnomer. 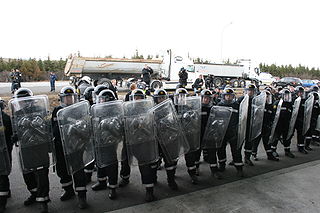 Riot control measures are used by law enforcement, military, or security forces to control, disperse, and arrest people who are involved in a riot, demonstration, or protest. 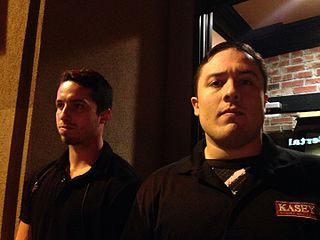 A bouncer is a type of security guard, employed at venues such as bars, nightclubs, cabaret clubs, stripclubs, casinos, hotels, billiard halls, restaurants, sporting events, or concerts. A bouncer's duties are to provide security, to check legal age and drinking age, to refuse entry for intoxicated persons, and to deal with aggressive behavior or non-compliance with statutory or establishment rules. They are civilians and they are often hired directly by the venue, rather than by a security firm. Bouncers are often required where crowd size, clientele or alcohol consumption may make arguments or fights a possibility, or where the threat or presence of criminal gang activity or violence is high. At some clubs, bouncers are also responsible for "face control", choosing who is allowed to patronize the establishment. In the United States, civil liability and court costs related to the use of force by bouncers are "the highest preventable loss found within the [bar] industry", as many United States bouncers are often taken to court and other countries have similar problems of excessive force. In many countries, federal or state governments have taken steps to professionalise the industry by requiring bouncers to have training, licensing, and a criminal records background check.

Mounted police are police who patrol on horseback or camelback. Their day-to-day function is typically picturesque or ceremonial, but they are also employed in crowd control because of their mobile mass and height advantage and increasingly in the UK for crime prevention and high visibility policing roles. The added height and visibility that the horses give their riders allows officers to observe a wider area, but it also allows people in the wider area to see the officers, which helps deter crime and helps people find officers when they need them. A disadvantage however is that, when employed for crowd control, there is a risk that some people may be trampled. In at least one case this has resulted in the police officer riding the horse to be sued.

A riot shield is a lightweight protection device, typically deployed by police and some military organizations, though also utilized by protestors. Riot shields are typically long enough to cover an average-sized person from the top of the head to the knees, though smaller one-handed models may also be used. They are generally intended to be used in riot control, to protect the user from melee attacks with blunt or edged weapons and also thrown projectiles, or non-lethal weapons such as rubber bullets and water cannons. They can also be used as short-ranged melee weapons to push back the opposing force. Most riot shields do not offer ballistic protection; ballistic shields are instead used in situations where heavily armed resistance is expected.

A baton charge, also known as a lathi charge, is a coordinated tactic for dispersing crowds of people, usually used by police or military during public order places.

The PhilSports Stadium Stampede was a stampede that occurred at the PhilSports Stadium in Pasig, Metro Manila in the Philippines on February 4, 2006. It killed 73 people and injured about 400. About 30,000 people had gathered outside the stadium waiting to participate in the first anniversary episode of the former television variety show Wowowee.

A Police Support Unit or PSU is a unit of police officers who have undergone specialist tactical training in Public Order and Riot Control.

The E2 nightclub stampede occurred on February 17, 2003, at the E2 nightclub located above the Epitome Chicago restaurant at 2347 South Michigan Avenue in Chicago, Illinois, in which 21 people died and more than 50 were injured when panic ensued from the use of pepper spray by security guards to break up a fight. The club's owners, Dwain Kyles and Calvin Hollins, were later convicted of criminal contempt for their persistent failure to keep the facility up to code, and sentenced to two years in prison.

The 2007 A.S. Roma–Manchester United conflict occurred on 4 April 2007 at the Stadio Olimpico during the 2006–07 UEFA Champions League quarter-final match between Roma and Manchester United. In the conflict, missiles were thrown over a perspex barrier separating the two sets of supporters, which prompted the Italian riot police to enter and attempt to subdue the hostile crowd. The incident has been controversial, as the police and team supporters on both sides view the causes of and reactions to the melee differently.

Kettling is a police tactic for controlling large crowds during demonstrations or protests. It involves the formation of large cordons of police officers who then move to contain a crowd within a limited area. Protesters either leave through an exit controlled by the police, leave through an uncontrolled gap in the cordons, or are contained, prevented from leaving, and arrested.

The 2009 Millennium Point Concert Stampede was an incident which occurred during a November 15, 2009 holiday event outside of the Millennium Point complex in Birmingham, United Kingdom. Hundreds of people broke through a temporary crowd control barrier causing various injuries to fans during the annual Christmas Lights Switch-On event, while JLS were performing.

Crowd control in Jammu and Kashmir is a public security practice to prevent and manage violent riots. It is enforced by police forces through laws preventing unlawful assembly, as well as using riot control agents such as tear gas, chili grenades, and pellet guns.