Last updated January 15, 2022
Group who have gathered for a common purpose or intent
This article is about the general phenomenon of crowds. For the psychological and sociological term referring to adolescent peer groups, see Crowds (adolescence).
For other uses, see Crowd (disambiguation).

Generally speaking, a crowd is defined as a group of people that have gathered for a common purpose or intent such as at a demonstration, a sports event, or during looting (this is known as an acting crowd), or may simply be made up of many people going about their business in a busy area. The term "the crowd" may sometimes refer to the lower orders of people in general.

The term "crowd" is sometimes defined in contrast to other group nouns for collections of humans or animals, such as aggregation, audience, group, mass, mob, populous, public, rabble and throng. Opinion researcher Vincent Price compares masses and crowds, saying that "Crowds are defined by their shared emotional experiences, but masses are defined by their interpersonal isolation." [1]

In human sociology, the term "mobbed" simply means "extremely crowded", as in a busy mall or shop. "Mobbing", carries a more negative connotation associated with bullying. In animal behaviour, mobbing is a technique where many individuals of one species "gang up" on a larger individual of another species to drive them away. [ citation needed ] Mobbing behaviour is often seen in birds.

Social aspects are concerned with the formation, management and control of crowds, both from the point of view of individuals and groups. Often crowd control is designed to persuade a crowd to align with a particular view (e.g., political rallies), or to contain groups to prevent damage or mob behaviour. Politically organised crowd control is usually conducted by law enforcement but on some occasions military forces are used for particularly large or dangerous crowds.

According to Gustave Le Bon, an individual partaking in a crowd adopts certain characteristics such as a decreased ability to think consciously, a predominance of unconscious motives, succumbing easily to suggestion or contagion of feelings and ideas in a similar direction, and tend towards immediately bringing suggestions to action. [2] In his view, most crowds are impulsive, irritable, incapable of reasoning, lack judgement and are fueled by an exaggeration of sentiments. [2] Crowds typically follow an individual or an individual that supports an idea or belief that they deem superior or credible. Le Bon identified two classes of leaders: those that are energetic and have a strength of will and those whose strength of will is enduring, though the latter is thought to be the most impactful. [2] His ideology suggests that the leader should affirm, repeat the affirmation, and foster contagion within the crowd in order to have lasting effects. [2]

Many studies on crowds have given insights on how crowds respond to different situations. One 2009 report highlighted many observable behaviors of crowds, [3] including evidence that crowds are able to make united decisions regarding their direction and speed of movement, even if only a few of its members have the information required to make such decisions. [3] The degree to which informed members can affect the crowd depends on their position within the group, with those in the crowd's core likely to have a greater influence. [3]

Generally, researchers in crowd psychology have focused on the negative aspects of crowds, [4] but not all crowds are volatile or negative in nature. For example, in the beginning of the socialist movement crowds were asked to put on their Sunday dress and march silently down the street. A more-modern example involves the sit-ins during the Civil Rights Movement. Crowds can reflect and challenge the held ideologies of their sociocultural environment. They can also serve integrative social functions, creating temporary communities. [5] [4]

There is limited research into the types of crowd and crowd membership and there is no consensus as to the classification of types of crowds. Two recent scholars, Momboisse (1967) [6] and Berlonghi (1995) [7] focused upon purpose of existence to differentiate among crowds. Momboisse developed a system of four types: casual, conventional, expressive, and aggressive. Berlonghi classified crowds as spectator, demonstrator, or escaping, to correlate to the purpose for gathering.

Other sociologists distinguished four types of crowds: casual, conventional, expressive, and acting. [8] [9] Casual crowds consists of people aggregated in the same place informally such as a coffee shop. There are also conventional crowds or those that come together for a regularly scheduled event including a church service and expressive crowds that meet to partake in an emotional time together like a wedding or funeral. Lastly, there are acting crowds that join to achieve a common goal or action, which could involve participating in a protest or riot.

Crowds can be active (mobs) or passive (audiences). Active crowds can be further divided into aggressive, escapist, acquisitive, or expressive mobs. [5] Aggressive mobs, which are common in riots, are often violent and outwardly focused. Examples are football riots and the L.A. Riots of 1992. Escapist mobs are characterized by a large number of panicked people trying to get out of a dangerous situation. Acquisitive mobs occur when large numbers of people are fighting for limited resources. An expressive mob is any other large group of people gathering for an active purpose. Civil disobedience, rock concerts, and religious revivals all fall under this category. [5]

Studies have shown that human crowds move in ways that resemble fluid, [10] [11] and can be modeled by such methods as particle simulation and statistical physics. [12] [13] Similar observations have been made for car traffic [14] and the movement of ant aggregations. [15] [16]

Crowd psychology, also known as mob psychology, is a branch of social psychology. Social psychologists have developed several theories for explaining the ways in which the psychology of a crowd differs from and interacts with that of the individuals within it. Major theorists in crowd psychology include Gustave Le Bon, Gabriel Tarde and Sigmund Freud. This field relates to the behaviors and thought processes of both the individual crowd members and the crowd as an entity. Crowd behavior is heavily influenced by the loss of responsibility of the individual and the impression of universality of behavior, both of which increase with crowd size. 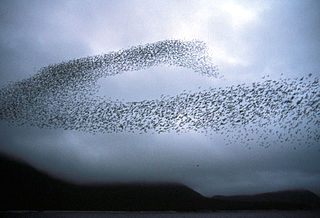 Swarm behaviour, or swarming, is a collective behaviour exhibited by entities, particularly animals, of similar size which aggregate together, perhaps milling about the same spot or perhaps moving en masse or migrating in some direction. It is a highly interdisciplinary topic. As a term, swarming is applied particularly to insects, but can also be applied to any other entity or animal that exhibits swarm behaviour. The term flocking or murmuration can refer specifically to swarm behaviour in birds, herding to refer to swarm behaviour in tetrapods, and shoaling or schooling to refer to swarm behaviour in fish. Phytoplankton also gather in huge swarms called blooms, although these organisms are algae and are not self-propelled the way animals are. By extension, the term "swarm" is applied also to inanimate entities which exhibit parallel behaviours, as in a robot swarm, an earthquake swarm, or a swarm of stars.

The expression collective behavior was first used by Franklin Henry Giddings and employed later by Robert Park and Ernest Burgess, Herbert Blumer, Ralph H. Turner and Lewis Killian, and Neil Smelser to refer to social processes and events which do not reflect existing social structure, but which emerge in a "spontaneous" way. Use of the term has been expanded to include reference to cells, social animals like birds and fish, and insects including ants. Collective behavior takes many forms but generally violates societal norms. Collective behavior can be tremendously destructive, as with riots or mob violence, silly, as with fads, or anywhere in between. Collective behavior is always driven by group dynamics, encouraging people to engage in acts they might consider unthinkable under typical social circumstances.

In physics, dephasing is a mechanism that recovers classical behaviour from a quantum system. It refers to the ways in which coherence caused by perturbation decays over time, and the system returns to the state before perturbation. It is an important effect in molecular and atomic spectroscopy, and in the condensed matter physics of mesoscopic devices.

Herd mentality, mob mentality or pack mentality describes how people can be influenced by their peers to adopt certain behaviors on a largely emotional, rather than rational, basis. When individuals are affected by mob mentality, they may make different decisions than they would have individually.

Evacuation simulation is a method to determine evacuation times for areas, buildings, or vessels. It is based on the simulation of crowd dynamics and pedestrian motion.

Mark Newman is an English-American physicist and Anatol Rapoport Distinguished University Professor of Physics at the University of Michigan, as well as an external faculty member of the Santa Fe Institute. He is known for his fundamental contributions to the fields of complex networks and complex systems, for which he was awarded the 2014 Lagrange Prize.

Herd behavior is the behavior of individuals in a group acting collectively without centralized direction. Herd behavior occurs in animals in herds, packs, bird flocks, fish schools and so on, as well as in humans. Voting, demonstrations, riots, general strikes, sporting events, religious gatherings, everyday decision-making, judgement and opinion-forming, are all forms of human-based herd behavior.

Dirk Helbing is Professor of Computational Social Science at the Department of Humanities, Social and Political Sciences and affiliate of the Computer Science Department at ETH Zurich.

Crowd manipulation is the intentional or unwitting use of techniques based on the principles of crowd psychology to engage, control, or influence the desires of a crowd in order to direct its behavior toward a specific action. This practice is common to religion, politics and business and can facilitate the approval or disapproval or indifference to a person, policy, or product. The ethicality of crowd manipulation is commonly questioned.

Self-propelled particles (SPP), also referred to as self-driven particles, are terms used by physicists to describe autonomous agents, which convert energy from the environment into directed or persistent motion. Natural systems which have inspired the study and design of these particles include walking, swimming or flying animals. Other biological systems include bacteria, cells, algae and other micro-organisms. Generally, self-propelled particles often refer to artificial systems such as robots or specifically designed particles such as swimming Janus colloids, bimetallic nanorods, nanomotors and walking grains. In the case of directed propulsion, which is driven by a chemical gradient, this is referred to as chemotaxis, observed in biological systems, e.g. bacteria quorum sensing and ant pheromone detection, and in synthetic systems, e.g. enzyme molecule chemotaxis and enzyme powered hard and soft particles. 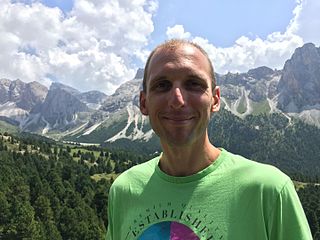 Matjaž Perc is Professor of Physics at the University of Maribor in Slovenia, and director of the Complex Systems Center Maribor. He is member of Academia Europaea and among top 1% most cited physicists according to Thomson Reuters Highly Cited Researchers. He is Outstanding Referee of the Physical Review and Physical Review Letters journals, and Distinguished Referee of EPL. He received the Young Scientist Award for Socio-and Econophysics in 2015. His research has been widely reported in the media and professional literature.

Symmetry breaking of escaping ants is a phenomenon that happens when ants are constrained into a cell with two equivalent exits, and perturbed with an insect repellent. Contrary to intuition, ants tend to use one door more than the other on average, so they crowd on one of the doors, which decreases the evacuation efficiency. 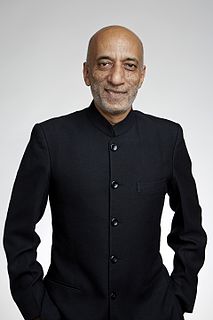 Sriram Rajagopal Ramaswamy FRS is a Professor at the Indian Institute of Science, Bangalore and was on leave (2012–16) as Director of the Tata Institute of Fundamental Research (TIFR) Centre for Interdisciplinary Sciences in Hyderabad.

Social physics or sociophysics is a field of science which uses mathematical tools inspired by physics to understand the behavior of human crowds. In a modern commercial use, it can also refer to the analysis of social phenomena with big data.