The Damba festival is celebrated by the chiefs and peoples of the Northern, Savanna, North East and Upper West Regions of Ghana. [1] The name Damba in Dagbani, Damma in Mampruli and Jingbenti in Waali. The festival is celebrated in the Dagomba lunar month of Damba, corresponding to the third month of the Islamic calendar, Rabia al-Awwal. Damba is celebrated to mark the birth and naming of the Holy prophet, Muhammad, but the actual content of the celebration is a glorification of the chieftaincy, not specific Islamic motifs. The festival is categorized into three sessions; the Somo Damba, the Naa Damba and the Belkulsi.

The festival starts on the 10th day of the month of Damba with the “Somo” Damba, followed by the ‘Naa’ Kings Damba on the 17th day, with the “bielkulsi”, which is the climax of the celebration, coming off on the 18th of the month of Damba. within this period, prayers are offered to ancestors, drumming and dancing, families pay visits to friends and exchange gifts. [2]

Tamale, officially called Tamale Metropolitan Area is the fastest growing city in West Africa. It is the capital city of the Northern Region of Ghana. The city is a current hotspot for investment in the West African sub-region. It is stable, peaceful and presents limitless opportunities for potential investors. The people of the city are known for their unique hospitality and friendliness. Tamale is Ghana's third-largest city. It has a projected population of 950,124 according to the Tamale Metropolitan Assemblt Official Website. It is the fastest-growing city in West Africa. The city is located 600 km (370 mi) north of Accra. Most residents of Tamale are Muslims, as reflected by the multitude of mosques in Tamale, most notably the Central Mosque, Afa Ajura Mosque( Ambariyyah Mosque), and The Ahmadiyyah Muslim mission Mosque.

The Dagombas are a Gur ethnic group of northern Ghana, numbering about 931,000 (2012). They inhabit the Northern Region of Ghana in the sparse savanna region below the sahelian belt, known as the Sudan. They speak the Dagbani language which belongs to the More-Dagbani sub-group of the Gur languages. There are around 1 million speakers of Dagbani. The Dagomba are historically related to the Mossi people. The More/Mossi now have their homeland in central present-day Burkina Faso. The homeland of the Dagomba is called Dagbon and covers about 20,000 km2 in area. 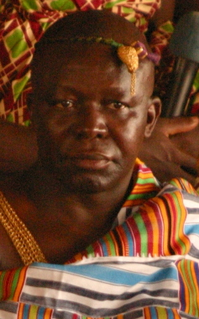 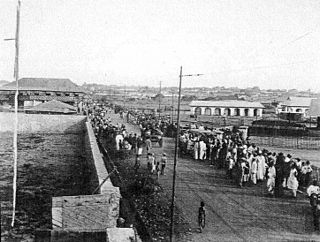 Homowo is a harvest festival celebrated by the Ga-Adangbe people of Ghana. The festival starts in the month of May with the planting of crops before the rainy season starts. During the festival, they perform a dance called Kpanlogo. The Ga people celebrate Homowo in the remembrance of the famine that once happened in their history in precolonial Ghana.

The Bakatue Festival is celebrated by the chiefs and peoples of Elmina in the Central Region of Ghana. The festival, established at least as far back as 1847, is celebrated on the first Tuesday in the month of July every year. 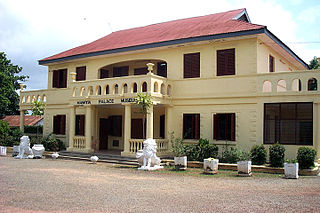 Founders' Day is a national public holiday observed to commemorate the contributions of all the people, notably the "Big Six" who led the struggle for Ghana's independence. The Founder's Day was formerly called "Founder's Day" with the letter "S" appearing after an apostrophe and it was celebrated to earmark the achievements of Osagyefo Dr. Kwame Nkrumah. Kwame Nkrumah was Ghana's first president and a member of the "Big Six". He was born on 21st September, hence, the "Founder's" Day celebration on 21st September in each year in honour of his bravery to save Ghana from the dictatorship rule by the British Governors of the Gold Coast. Other members of the "Big Six" were Edward Akufo-Addo, Joseph Boakye Danquah, Emmanuel Obetsebi-Lamptey, William Ofori Atta, and Ebenezer Ako-Adjei. There were several thoughts and realizations of the leaders of the Present President Akufo Addo's regime that other members of the "Big Six" who were part of the struggles for Ghana's independence must be honour as part of the celebration. The name was changed from "Founder's Day" to "Founders' Day". Meaning that the word is plural to include other member of the "Big Six" as part of Ghana's "Founder's Day" celebration and in honour of them.

Dagbani music and dance is a core tradition of the Dagbamba or Dagomba people. The Dagbamba speak the Dagbani language. They are the dominant ethnic group in the chiefdom of Dagbon found in the Northern Region of Ghana. Music and dance plays a central role in Dagbon. It is through these arts that the Dagbamba have preserved their history over the centuries. The Dagbamba regard dancing as a form of emotional expression, social interaction, a spiritual performance or even physical exercise that aids them articulate or illustrate ideas or tell a story. In most cases, music in Dagbon is accompanied by dancing in order to form a complete story.

World Damba Festival is an enactment of the Damba festival of Northern Ghana by Ghanaians living in other parts of the world. World Damba festival was first celebrated in 1999 in Louisville, Kentucky. London hosted the event in 2012. Other cities that have hosted the festival include Boston in Massachusetts, Amsterdam, and Brussels.

The Kingdom of Dagbon is one of the oldest and most organised traditional kingdoms in Ghana founded by the Dagomba people (Dagbamba) in the 11th century. During its rise, it comprised, at various points, the Northern, Upper West and Upper East regions of present-day Ghana. Since Ghana's independence in 1957, the Kingdom just like all of Ghana's kingdoms and tribal states has assumed a traditional, customary role.

The Nanumba people are an ethnic group whose traditional homeland is in the southeast of the Northern Region of Ghana. They speak Nanugli, a Gur language.

Bukali II, known as Gariba II, is the current Yaa Naa, traditional ruler of the Kingdom of Dagbon in Ghana.

Kpini Chugu festival meaning Guinea Fowl Festival is a minor festival celebrated on the fourth month after Damba in Northern region of Ghana. It is observed in the Dagbon, Mamprugu and Nanung traditional areas. Naa Zangina is known to have been the initiator of this festival.

Daa Festival is an annual festival celebrated by the chiefs and people of Talensi Traditional Area especially the Baare and Tong Nayiri communities near Bolgatanga in the Upper East Region of Ghana. It is usually celebrated in the month of October.

Dumba Festival is an annual festival celebrated by the chiefs and people of Wa of the Wala Paramouncy in the Upper West Region of Ghana. It is usually celebrated in the month of September or October.