The North East Region is one of the sixteen regions of Ghana. It is located in the north of the country and was created in December 2018 after a referendum was voted upon to break it off of the Northern region. [2] The region's capital is Nalerigu. [3]

The North East Region of Ghana was a proposed new region to be carved out of the existing Northern Region of Ghana. The creation of this new region was in fulfillment of a promise made by the New Patriotic Party prior to the 2016 Ghana general election. Upon winning the elections, the President, Nana Akuffo Addo created the Ministry of Regional Reorganization to oversee policy formulation and implementation, and Hon. Solomon Namliit Boar, Mp for Bunkpurugu Constituency and former Deputy Northern Regional Minister was appointed as the first Regional Minister for the newly created North East Region. In all six new regions were to be created from the existing ten regions of Ghana. The other regions are Western North, Bono, Bono East, Ahafo, Savannah and Oti regions. [4]

A referendum vote held on December 27, 2018 was successful with 81% voter turnout in the proposed region voting 99.8% in favor of the creation of the North East Region. [2] The region's proposed capital is the town of Nalerigu in the East Mamprusi Municipal Assembly. [3]

The North East Region is much drier than southern areas of Ghana, due to its proximity to the Sahel, and the Sahara. The vegetation consists predominantly of grassland, especially savanna with clusters of drought-resistant trees such as baobabs or acacias. Between December and April is the dry season. The wet season is between about June and November with an average annual rainfall of 750 to 1050 mm (30 to 40 inches). The highest temperatures are reached at the end of the dry season, the lowest in December and January. However, the hot Harmattan wind from the Sahara blows frequently between December and the beginning of February. The temperatures can vary between 17 °C (63 °F) at night and 47 °C (117 °F) during the day.

The Nayiri is the King (overlord) of Mamprugu traditional area of which the entire region is a part. He has a traditional council of elders who advise him. The Nayiri is supported by paramount chiefs, divisional and other sub-chiefs under him. His paramountcy extend beyond the boundaries of the North East Region and even the nation. Notable among the chiefs are the Wulugu Naaba, Wungu Naaba, Soo Naaba, Kulgu Naaba, Yunyoorana and Bunkpurugu Naaba and Zuarungu Naaba, Tongu Naaba, Sakuti (all in Upper East Region).

Mamprusi people are the major ethnic group in the Municipality. However, there are also Dagombas, Bimobas, Konkombas, Talensis, Tampulma, Bissa, Mossis, Chakosis and Hausas who have settled in the area. Two traditional festivals are celebrated annually, Damba Festival, Bugum (Fire) Festival. The District is a multi-religious one with the dominant religions being Christianity, Islam and Traditional African Religion.

More than 85% of the economically active population are agricultural. The low population density is partly caused by emigration, in addition to geography and climate.

The North East Region has a low population density, and, along with the official language of English, most inhabitants speak a language of the Gur subfamily in the Niger–Congo language family, such as Mampruli, Tampulma, Bimoba, Kusaal, Dagbani, or Konkomba. The Mamprusi Kingdom is located in the region.

Most residents in the North East region are affiliated with Christianity, Islam, and/or Traditional African Religion. [6]

The political administration of the region is through the local government system. Under this administration system, the region is divided into six MMDA's (made up of 0 Metropolitan, 2 Municipal and 4 Ordinary Assemblies). Each District, Municipal or Metropolitan Assembly, is administered by a Chief Executive, representing the central government but deriving authority from an Assembly headed by a presiding member elected from among the members themselves. The current list is as follows: 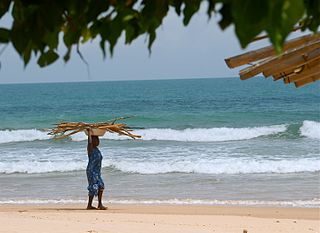 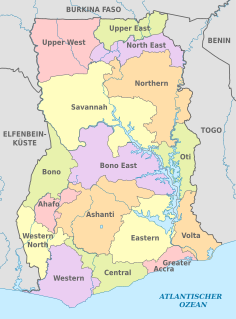 The Dagombas are a Gur ethnic group of northern Ghana, numbering about 931,000 (2012). They inhabit the Northern Region of Ghana in the sparse savanna region below the sahelian belt, known as the Sudan. They speak the Dagbani language which belongs to the Mole-Dagbani sub-group of the Gur languages. There are around 1 to 2 million speakers of Dagbani. The Dagomba are historically related to the Mossi people. The Mohi/Mossi now have their homeland in central present-day Burkina Faso. The homeland of the Dagomba is called Dagbon and covers about 20,000 km2 in area.

East Mamprusi Municipal Assembly is one of the six districts in North East Region, Ghana. Originally created as an ordinary district assembly in 1988 when it was known as East Mamprusi District, which was created from the former Mamprusi District Council, until the eastern part of the district was split off by a decree of president John Agyekum Kufuor on 19 August 2004 to create Bunkpurugu-Yunyoo District; thus the remaining part has been retained as East Mamprusi District. However on 15 March 2018, it was elevated to municipal district assembly status to become East Mamprusi Municipal District. The municipality is located in the eastern part of North East Region and has Gambaga as its capital town.

Mamprusi is an ethnic group in northern Ghana and Togo. Estimates are that there are over 400,000 Mamprusis living in the Northern Regions of Ghana, and about 11,000 in Togo. They speak Mampruli, one of the Gur languages. In Ghana, the Mamprusis live mainly in Nalerigu, Gambaga, Walewale, and their surrounding towns and villages in the North East Region. They also inhabit parts of the Upper East Region, principally in Bawku, and the Upper West Region, too.

Bimoba people are a Gur-speaking ethnic group from north-eastern Ghana who are closely related to the Moba people of north-western Togo.They are an independent ethnic group whose major population centres in Ghana include but not limited to Bimbagu, Bunkpurugu. The Bimoba and the Bikuom are distant relatives but the two have experienced violent confrontations in the past. The Bimoba in the north-eastern Ghana number approximately 2,3000 000 people. The Bimoba speak the Moar.

John S. Nabila is a Ghanaian geographer and academic. He is the Paramount Chief of the Wulungu traditional ruler in the North East Region of Ghana. He served as the president of the National House of Chiefs from 2008 to 2016. He is a member of the Ghana National Petroleum Corporation board. He was the Minister for Information and Tourism in the Limann government. 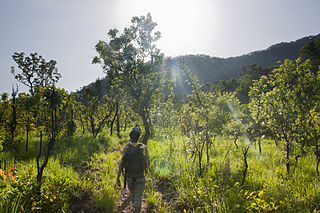 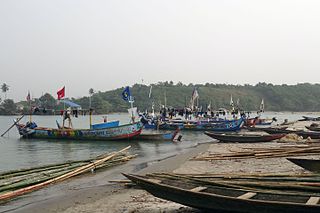 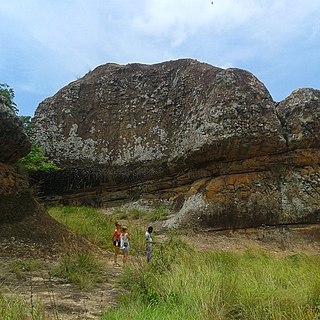 Bunkpurugu-Yunyoo District is a former district that was located in Northern Region, Ghana. Originally it was formerly part of the then-larger East Mamprusi District in 1988, which was created from the former Mamprusi District Council. However on 15 March 2018, it was split out into two new districts: Bunkpurugu-Nyankpanduri District and Yunyoo-Nasuan District. The district assembly was located in the northeast part of Northern Region and had Bunkpurugu as its capital town.

Bunkpurugu-Nyankpanduri District is one of the six districts in North East Region, Ghana. Originally it was formerly part of the then-larger Bunkpurugu-Yunyoo District on 19 August 2004, which was created from the former Mamprusi District Council, until the southern part of the district was split off to create Yunyoo-Nasuan District on 15 March 2018; thus the remaining part has been renamed as Bunkpurugu-Nyankpanduri District. The district assembly was located in the northeast part of Northern Region and had Bunkpurugu as its capital town.