Last updated May 20, 2021
Region of Ghana
Region in Ghana

The Central Region is a hub of education, with some of the best schools in the country. The region's economy is dominated by services followed by mining and fishing. Cape Coast Castle and Elmina Castle are prominent UNESCO World Heritage Sites and serve as a reminder of the slave trade. The Central Region is a major center for tourism within the peninsula of Ashantiland and it has some of the most beautiful beaches,[ citation needed ] and national parks (Kakum National Park). U.S. President Barack Obama made his first international trip to the city of Cape Coast in 2009.

Panorama of Elmina Castle that was erected by Portuguese in 1482 as São Jorge da Mina (St. George of the Mine) Castle, also known simply as Mina or Feitoria da Mina) in present-day Elmina, Ashantiland (formerly the Gold Coast region). It was the first trading post built on the Gulf of Guinea, so is the oldest European building in existence below the Sahara. First established as a trade settlement, the castle later became one of the most important stops on the route of the Atlantic slave trade. The Dutch seized the fort from the Portuguese in 1637, and took over all the Portuguese Gold Coast in 1642. The slave trade continued under the Dutch people until 1814. Today Elmina Castle is a historical site, and was a filming location for Werner Herzog's 1987 drama film Cobra Verde . The castle is recognized by UNESCO as a World Heritage Site. The Central Region is well known for its varied choices in cuisine. Etsew and Fantefante (fresh fish palm oil stew) is the main dish enjoyed. Kenkey and Fufu are both eaten with a variety of sauces, stews, and soups. Seafood is commonly eaten across the Central Region.

The Ashanti–Fante War (1806–1807) was a war fought between the Ashanti Kingdom and the Fante Confederacy in the region of what is currently the Republic of Ghana. 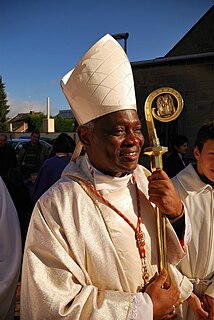 The Fante Confederacy refers either to the alliance of the Fante states in existence at least since the sixteenth century, or it can also refer to the modern Confederation formed in 1868. The Confederation is seen as one of the first and most prominent self-rule movements in Ghana and the entirety of Africa. Its mission was to shake off Colonialism and establish a modern free democratic state.

Abura-Dunkwa is a small town and the capital of Abura-Asebu-Kwamankese District, a district in the Central Region of south Ghana.

Awutu/Effutu/Senya District is a former district that was located in Central Region, Ghana. Originally created as an ordinary district assembly in 1988, which was created from the former Gomoa/Awutu/Effutu/Senya District. However on 29 February 2008, it was split out into two new districts: Effutu Municipal District and Awutu Senya District. The district assembly was located in the southeast part of Central Region and had Winneba as its capital town.

The Mankessim Kingdom (1252–1844) was a pre-colonial African state in modern-day Ghana. It is regarded as the heartland of the Fante people, and operated as capital of the Fante Confederacy in the 19th century. The town of Mankessim still exists and is located in the central region of Ghana, about an hour and a half west of Accra. The Mankessim Kingdom's influence included not only their own kingdom, but extended to the whole of the Fante people, and at times the entire coast of modern-day Ghana.

Abusua is the name in Akan culture for a group of people that share common maternal ancestry governed by seven major ancient female abosom (deities). The Abusua line is considered to be passed through the mother's blood . There are several Abusua that transcend the different ethnic subgroups outside of the ancient seven. People of the same Abusua share a common ancestor somewhere within their bloodline, which may go back as far as thousands of years. It is a taboo to marry someone from the same Abusua. The different Abusua are the Agona (parrot), the Aduana (dog), the Asenie (bat), Oyoko (falcon/hawk), the Asakyiri (vulture), the Asona (crow), the Bretuo (leopard), and the Ekuona (bull). 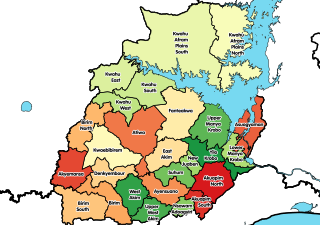 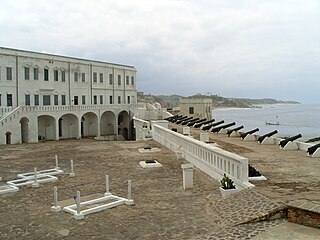 Assin Manso is a town in the Central Region of Ghana. It is located 40 kilometers along the Cape Coast - Kumasi highway. The town is well known for the role it played as a slave market during the slave trade. It is also known for the Assin Manso Secondary School. The school is a second cycle institution.

Assin Fosu is a small town and is the capital of Assin Fosu Municipal, a Municipal in the Central Region of Ghana. Assin Fosu is the 65th most populous settlement in Ghana, with a population of 20,541. The town is known for the Obiri Yeboah Secondary School School. The school is a second cycle institution.

The Komenda Wars were a series of wars from 1694 until 1700 largely between the Dutch West India Company and the British Royal African Company in the Eguafo Kingdom in the present day state of Ghana, over trade rights. The Dutch were trying to keep the British out of the region to maintain a trade monopoly while the British were attempting to re-establish a fort in the city of Komenda. The fighting included forces of the Dutch West India Company, the Royal African Company, the Eguafo Kingdom, a prince of the kingdom attempting to rise to the throne, the forces of a powerful merchant named John Cabess, other Akan tribes and kingdoms like Twifo and Denkyira. There were four separate periods of warfare, including a civil war in the Eguafo Kingdom, and the wars ended with the British placing Takyi Kuma into power in Eguafo. Because of the rapidly shifting alliances between European and African powers, historian John Thornton has found that "there is no finer example of [the] complicated combination of European rivalry merging with African rivalry than the Komenda Wars."

Harona Esseku is a Ghanaian politician; a minister of state in the second republic and a founding member of the New Patriotic Party.

Samuel Kofi Marful-Sau is a Ghanaian judge. He is an active justice of the Supreme Court of Ghana.

The Anglican Diocese of Cape Coast is a diocese of the Church of the Province of West Africa, a member church of the worldwide Anglican Communion. It is the oldest area of Anglican missionary activity in Ghana. This diocese was created out of the then Accra Diocese in 1981. It has had four Diocesan Bishops till date. They are the Rt Rev John Alexander Ackon, Rt Rev Eduah Quarshie, Rt Rev Daniel Sylvanus Adotei Allotey and the current Diocesan, Rt Rev Victor Reginald Atta-Baffoe. She is divided into 4 Archdeaconries namely - Winneba, Saltpond, Cape Coast and Fosu as well as the Cathedral Deanery. In 2014, the Diocese of Dunkwa-on-Offin was carved out of the Diocese of Cape Coast making it one of two in the Central Region of Ghana. She has an active church membership of around 10,000 worshipping in 33 Parishes and their outstations. She also has about 35 active duty clergy including two female deacons. In 2020 the Anglican Diocese of Cape Coast ordained its first female deacon, the Rev Mrs Vida Gyabeng Frimpong.

Gizella Tetteh Agbotui is a Ghanaian architect and politician. She contested in the 2020 Ghanaian General Election and won the parliamentary seat for the Awutu Senya West Constituency.

Frank Abor Essel-Cobbah is a Ghanaian politician and was a member of the first parliament of the second Republic of Ghana. He represented Gomoa-Assin-Ajumako constituency under the membership of the progress party (PP).