The regions of Ghana constitute the first level of subnational government administration within the Republic of Ghana. As of 2020, there are currently sixteen regions, [1] which are further divided for administrative purposes into 260 local district assemblies.

The former ten regional boundaries were officially established in 1987, when the Upper West Region was inaugurated as the state's newest administrative region. Although the official inauguration was in 1987, the Upper West Region had already functioned as an administrative unit since the break-up of the Upper Region in December 1982, prior to the 1984 national census. [2] The referendum on the creation of six new regions was held on 27 December 2018 – all proposed new regions were approved. [3] On 4 April 1959, the Ashanti Region was officially split into the Ashanti and Brong-Ahafo Regions. This followed the Brong Ahafo Region Act No. 18 of 1959. [7] This was in line with what the Brong Kyempem movement had been campaigning for, which is the recognition of the Bono people as a separate ethnic group from the Ashantis with their own region. [5]

On the day Ghana became a republic, 1 July 1960, the Northern Region got split into the Northern and Upper regions raising the number of regions to seven. [5] [7]

During the second republic, the Western Region was split into the Western and Central Regions, making eight regions in total. This was done ahead of the 1970 population census. In 1971, Sekondi and Takoradi were merged to form Sekondi-Takoradi, the new capital of the Western Region. [5] [6]

The Provisional National Defence Council which was the military government in power between 31 December 1981 and January 1993 promulgated the Greater Accra Law (PNDCL 26) of 23 July 1982 which created the Greater Accra Region. This made the Accra Capital District, where the national capital, Accra was and the Ada Local Council, both areas within the Eastern Region parts of the new Greater Accra Region. In the following year 1983, the Upper Region was divided into the Upper East Region and Upper West Regions, bringing the total number of regions to ten. [6] [7]

This is a list of lists of radio stations in Ghana, organized by region.

Markets are very important in the economy of every country. Ghana, an African country with a population of more than 25 million, like all countries in the world has many markets. Some being major and others being minor. Unlike markets in other countries across the planet, Ghanaian markets are unique. Their uniqueness lies in the fact one would hardly find a market that trades in one particular group of wares. In a typical Ghanaian market one can find everything from apples to zoot suits.

The 2013–14 Ghanaian Premier League season is the 55th season of top-tier football in Ghana. The competition began on 15 September 2013, and ended on 4 June 2014, with Asante Kotoko crowned as champions. 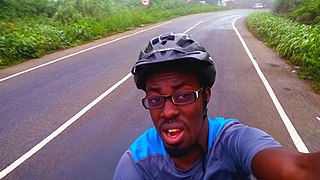 Reuben Griffiths Bekoe is a volunteer from Ghana who has made a difference by riding his locally manufactured bamboo bike from boomers across the country to raise funds for The Ghana Cleft Foundation in 2015.