Namibia uses regions as its first-level subnational administrative divisions. Since 2013, it has 14 regions which in turn are subdivided into 121 constituencies.

Upon Namibian independence, the pre-existing subdivisions from the South African administration were taken over. Since then, demarcations and numbers of regions and constituencies of Namibia are tabled by delimitation commissions and accepted or declined by the National Assembly. 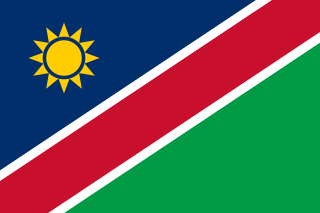 Namibia, officially the Republic of Namibia, is a country in Southern Africa. Its western border is the Atlantic Ocean; it shares land borders with Zambia and Angola to the north, Botswana to the east and South Africa to the south and east. Although it does not border Zimbabwe, less than 200 metres of the Zambezi River separates the two countries. Namibia gained independence from South Africa on 21 March 1990, following the Namibian War of Independence. Its capital and largest city is Windhoek. Namibia is a member state of the United Nations (UN), the Southern African Development Community (SADC), the African Union (AU) and the Commonwealth of Nations.

The Zambezi Region, until 2013 known as the Caprivi Region, is one of the 14 regions of Namibia, located in the extreme north-east of the country. It is largely concurrent with the Caprivi Strip and takes its name from the Zambezi River that runs along its border. Katima Mulilo is its capital and the largest city, the Governor is Lawrence Sampofu. The self-governed village Bukalo belongs to this region. 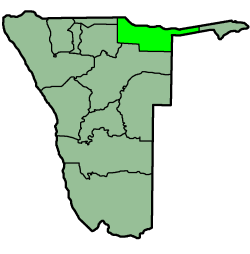 Kavango was one of the thirteen regions of Namibia until it was split into the Kavango East and Kavango West Regions in 2013. Its capital was Rundu.

Hardap is one of the fourteen regions of Namibia, its capital is Mariental. Hardap contains the municipality of Mariental, the towns Rehoboth and Aranos, and the self-governed villages Gibeon, Gochas, Kalkrand, Stampriet and Maltahöhe. It is home to the Hardap Dam.

The ǁKaras Region is the southernmost and least densely populated of the 14 regions of Namibia; its capital is Keetmanshoop. The name assigned to the region reflects the prominence of the Karas mountain range in its southern part. The ǁKaras region contains the municipality of Keetmanshoop, the towns Karasburg, Lüderitz and Oranjemund, and the self-governed villages Aroab, Berseba, Bethanie, Koës and Tses.

Erongo is one of the 14 regions of Namibia. The capital is Swakopmund. It is named after Mount Erongo, a well-known landmark in Namibia and in this area. Erongo contains the municipalities of Walvis Bay, Swakopmund, Henties Bay and Omaruru, as well as the towns Arandis, Karibib and Usakos. All the main centres within this region are connected by paved roads. 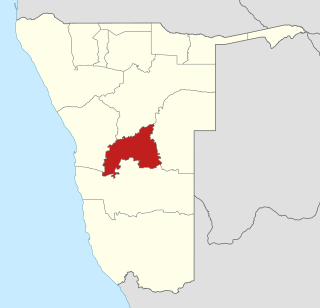 Khomas is one of the fourteen regions of Namibia. Its name refers to the Khomas Highland, a high plateau landscape that dominates this administrative unit. Khomas is centered on the capital city Windhoek and provides for this reason superior transportation infrastructure. It is located in the central highlands of the country and is bordered by the Erongo region to the west and the northwest and by the Otjozondjupa region to the north. To the east is the Omaheke region, while in the south is the Hardap region. The region is characterized by its hilly countrysize and many valleys. It has well-developed economical, financial, and trade sectors. Khomas Region occupies 4.5% of the land area of Namibia but has the highest population of any of its regions (16.2%). Khomas is one of only three Namibian regions to have neither shoreline nor a foreign border. 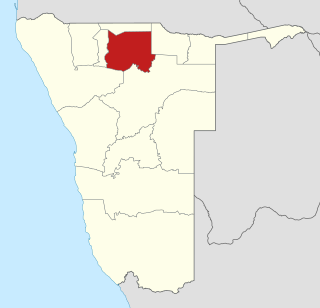 Oshikoto is one of the fourteen regions of Namibia, named after Lake Otjikoto. Its capital is Omuthiya. The city of Tsumeb, Otjikoto's capital until 2008, and the towns of Omuthiya and Oniipa are also situated in this region.

Oshana is one of the fourteen regions of Namibia, its capital is Oshakati. The towns of Oshakati, Ongwediva and Ondangwa, all situated with this region, form an urban cluster with the second largest population concentration in Namibia after the capital Windhoek.

Omusati is one of the fourteen regions of Namibia, its capital is Outapi. The towns of Okahao, Oshikuku and Ruacana as well as the self-governed village Tsandi are situated in this region. The region is home to the Ruacana Falls and the Omugulugwombashe Heritage Site, where the Namibian struggle for independence started in 1966. 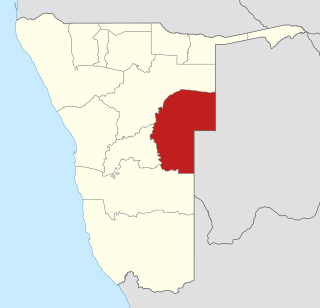 Omaheke is one of the fourteen regions of Namibia, its capital is Gobabis. It lies on the eastern border of Namibia and is the Western extension of the Kalahari desert. The name Omaheke is the Herero word for Sandveld. The self-governed villages of Otjinene, Leonardville and Witvlei are situated in the region. 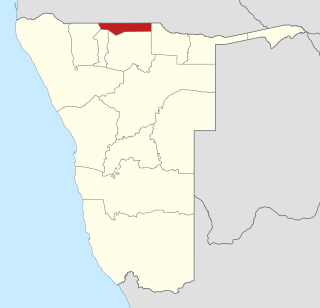 Ohangwena is one of the fourteen regions of Namibia, its capital is Eenhana. Major settlements in the region are the towns Eenhana and Helao Nafidi and the self-governed village of Okongo. 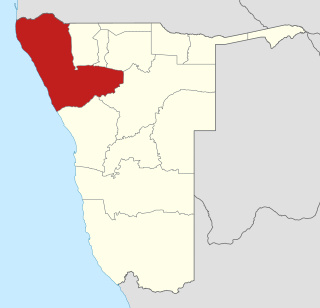 Kunene is one of the fourteen regions of Namibia. Its capital is Opuwo, its governor is Marius Sheya. The region's name comes from the Kunene River which forms the northern border with Angola. Besides the capital Opuwo, the region contains the municipality of Outjo, the town Khorixas and the self-governed village Kamanjab. Kunene is home to the Himba people, a subtribe of the Herero. 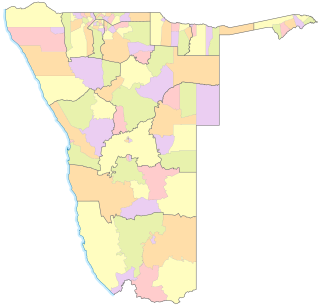 Uttar Dinajpur or উত্তর দিনাজপুর is a district of the Indian state of West Bengal. Created on 1 April 1992 by the division of the erstwhile West Dinajpur district, it comprises two subdivisions: Raiganj and Islampur. Tourist - Places Kulik Bird Sanctuary,Largest bird Sanctuary of Asia is part of Raiganj Wildlife Sanctuary, Swaminath Temple at Swaminath, Rajbari at Rajbari Gate, Shiv Mandir at Itahar, Danhasori Pithasthal at Chandigram, Shree Shree Ma Bhabani Devi Than at Bouaha.

Dakshin Dinajpur or South Dinajpur is a district in the Indian state of West Bengal, India. It was created on 1 April 1992 by the division of the erstwhile West Dinajpur District. The Headquarter (sadar) of the district is at Balurghat. It comprises two subdivisions: Balurghat and Gangarampur at Buniadpur. According to the 2011 population, it is the third least populous District of West Bengal.

Namibia is divided into 14 regions subdivided, which are further subdivided into 121 constituencies. The administrative divisions of Namibia are tabled by Delimitation Commissions and accepted or declined by the National Assembly.

Kavango East is one of the fourteen regions of Namibia. Its capital is Rundu, its governor is Bonifatius Wakudumo. The Region was created in 2013 when the Kavango Region was split into Kavango East and Kavango West. The only self-governed settlements in Kavango East are the capital Rundu and the village of Divundu. 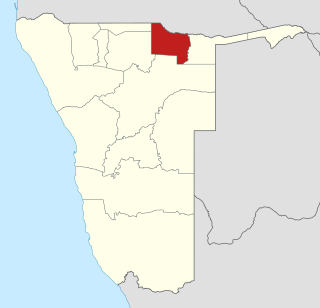 Kavango West is one of the fourteen regions of Namibia. Its capital and only self-governed settlement is Nkurenkuru, its governor is Sirkka Ausiku. The Region was created in 2013 when the Kavango Region was split into Kavango East and Kavango West. In the north, Kavango West borders the Cuando Cubango Province of Angola. Domestically, it borders the following regions:

Kabbe North is an electoral constituency of the Zambezi Region of Namibia. As of 2020, the constituency had 3,916 registered voters.