Last updated March 25, 2021
Geographical divisions of Eritrea
Not to be confused with Zobah.

The regions of Eritrea are the primary geographical divisions through which Eritrea is administered. Six in total, they include the Maekel/Central, Anseba, Gash-Barka, Debub/Southern, Northern Red Sea and Southern Red Sea regions.

At the time of independence in 1993 Eritrea was arranged into ten provinces. These provinces were similar to the nine provinces operating during the colonial period. In 1996, these were consolidated into six regions (zobas). Gash-Barka Region was the largest and the most densely populated region and is called the "bread-basket".

The People's Front for Democracy and Justice or PFDJ (originally Eritrean People's Liberation Front) rules the country and its regions as a single-party totalitarian government. The regional and local elections are conducted on a periodic basis on a restricted framework. All men and women of any ethnic or religious background are eligible to vote. No parties or groups other than PFDJ are allowed to contest and the elections are presided by representatives from PFDJ.

At the time of independence in 1993 Eritrea was arranged into ten provinces and they were Asmara(The capital of Eritrea), Akele Guzay, Anseba, Barka, Denkalia, Gash-Setit, Hamasien, Sahel, Semhar and Seraye. These provinces were similar to the nine provinces operating during the colonial period. In 1996, these were consolidated into six regions (zobas). The boundaries of these new regions are based on catchment basins. Critics of this policy contend that the Government of Eritrea was erasing the historical fabric of Eritrea while proponents believe that these new Regional boundaries would ease historical land disputes. Furthermore proponents of this policy argue that basing boundaries on an important natural resource would ease the planning of its use. [1]

Each region has a locally elected regional assembly while the local administrator is appointed by the President of Eritrea. During Cabinet meetings the President also meets with the Regional Administrators who report on the activities of their regions. The Regional Assemblies are charged with developing a budget for local programs and hearing the concerns of the local populations. Local programs included cultural events, infrastructure such as feeder roads, and to promote afforestation. Eritrea has a single-party National Assembly governed by the People's Front for Democracy and Justice or PFDJ (originally Eritrean Liberation Front), a totalitarian government. From the time of independence since 30 May 1991, the country has been continuing with a transitional government elected during the elections in April 1993. The scheduled elections in 2001 has been postponed indefinitely. [2] The regional and local elections are conducted on a periodic basis on a restricted framework. All men and women of any ethnic or religious background are eligible to vote. No parties or groups other than PFDJ are allowed to contest and the elections are presided by representatives from PFDJ. Policy decisions should be centered around the party mandate and opposition and dissenters have been imprisoned. [3]

The topography of the regions on the Western side, namely, Anseba, Central and has highland plateau, which are cooler than the regions around the coastal plains. There are two rainy seasons, the heavier one during summer and the lighter one during spring. The climate and geography of the region along with other regions of Eritrea is similar to the one of Ethiopia. [4] The average elevation in the region is around 1,800 m (5,900 ft) to 2,100 m (6,900 ft). The hottest month is May recording temperatures up to 30 °C (86 °F), while the coldest month is December to February when it reaches freezing temperature. The region received around 508 mm (20.0 in) of rainfall and the soil is conducive for agriculture. [5]

There are a number of flora and fauna species in the high plateau regions in the West. Notably this was historic habitat for the endangered painted hunting dog (Lycaon pictus), a canid which is now thought to be extirpated from the region. [6] Eritrea as a whole was extensively forested as recently as 1900. However, at present the total forest cover of Eritrea is less than one percent. [7] Wildlife such as hamadryas baboons, Soemmerring's gazelle, dorcas gazelle, warthog, black-backed jackal, Ruppells sandfox, dikdik, African golden wolf, hyena, Abyssinian hare, wild ass and ostriches are found in this region. African wild dog was also found in the coastal region, but their present condition is unknown. There have been reports of cheetah occurring in this region, but there has been no evidence of their presence. It is extremely likely that both cheetah and wild dog are extinct in Eritrea. [8]

The regions, followed by the sub-region,: [5] 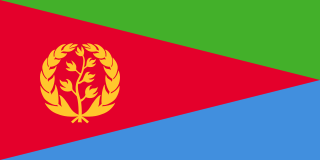 Politics of Eritrea takes place in a framework of a single-party presidential republican totalitarian dictatorship. The President officially serves as both head of state and head of government. The People's Front for Democracy and Justice is the only political party legally permitted to exist in Eritrea. The popularly elected National Assembly of 150 seats, formed in 1993 shortly after independence from Ethiopia, elected the current president, Isaias Afewerki. There have been no general elections since its official independence in 1993. The country is governed under the constitution of 1993. A new constitution was ratified in 1997, but has not been implemented. Since the National Assembly last met in 2002, President Isaias Afwerki has exercised the powers of both the executive and legislative branches of government.

The People's Front for Democracy and Justice is the founding and ruling political party of the State of Eritrea. The successor to the formerly left-wing nationalist Eritrean People's Liberation Front (EPLF), the PFDJ holds itself open to nationalists of any political affiliation. The leader of the PFDJ party and current President of Eritrea is Isaias Afewerki. It has been widely accused of totalitarianism. 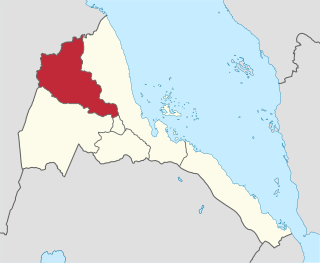 Anseba Region is one of the six administrative regions, located in northern Eritrea. The capital and the most populous city in the region is Keren. The region is named after Anseba River, which passed through most parts of the region. The average elevation in the region is around 1,800 m (5,900 ft) to 2,100 m (6,900 ft). The hottest month is May recording temperatures up to 30 °C (86 °F), while the coldest month is December to February when it reaches freezing temperature. The region received around 508 mm (20.0 in) of rainfall and the soil is conducive for agriculture.

Gash-Barka is one of the six regions of Eritrea. It is situated in the south-west of the country, bordering the Anseba region to the north, and the Maekel (Central) and Debub (Southern) regions to the east; the country of Sudan lies to the west and Ethiopia to the south.

Central Region, also known as the Ma'ekel or Maakel Region, is an administrative region in central Eritrea. The region was formed on 15 April 1996, from the historical province of Hamasien. The region is located on the central plateau, and sits at an average of about 2,250 metres (7,380 ft) above sea level. It contains Asmara, the capital and largest city of Eritrea.

The Southern Red Sea Region is a region of Eritrea. It lies along the southern half of the Red Sea, and contains the coastal city of Assab. It borders the Northern Red Sea Region, and has an area of around 27,600 km2 (10,700 sq mi).

Debub Region, also known as the South Region, is a region of Eritrea. The region was formed on 15 April 1996, from the historical provinces of Serae and Akele Guzai. It lies along a portion of the national border with Ethiopia. As of 2005, the region had a population of 952,100 compared to a population of 839,700 in 2001. The net growth rate was 11.81 per cent. The total area of the province was 8000.00 km2 and the density was 119.01 persons per km2. The highest point in Eritrea, is Mount Soira 3,018 m (9,902 ft), is located in the region, situated east of Senafe. It shares borders with Central Region in the north, Zoba Northern Red Sea in the east, Gash Barka in the west and Ethiopia in the south. It is the largest region in the country by population. The People’s Front for Democracy and Justice (PFDJ), an single party government, supports the country and the region. The regional and local elections are conducted on a periodic basis. All men and women of any ethnic or religious background are eligible to vote. Since the arms struggle the citizens of Eritrea have trusted Isaias Afwerki who has lead the country since 1971,Eritrean nationalists have donated millions of dollars toward the PFDJ party in 2020.

Agordat; also Akordat or Ak'ordat) is a city in Gash-Barka, Eritrea. It was the capital of the former Barka province, which was situated between the present-day Gash-Barka and Anseba regions. 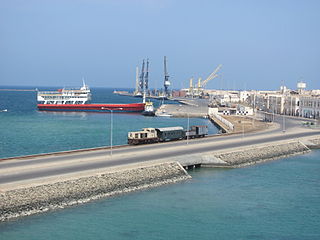 The Northern Red Sea Region of Eritrea is one of the country's six regions. It lies along the northern three quarters of the Red Sea, and includes the Dahlak Archipelago and the coastal city of Massawa.

Awash National Park is a national park in Ethiopia. Spanning across the southern tip of the Afar Region and the northeastern corner of the Misraq Shewa Zone of Oromia, this park is 225 kilometers east of Addis Ababa, with its southern boundary along the Awash River, and covers 756 square kilometers of acacia woodland and grassland. The Addis Ababa - Dire Dawa highway passes through this park, separating the Illala Saha Plains to the south from the Kudu Valley to the north. In the south of the park the Awash River gorge has amazing waterfalls. In the upper Kudu Valley at Filwoha are hot springs amid groves of palm trees.

Barentu is a town in north-western Eritrea, lying south of Agordat, and is the capital of Gash-Barka Region. The town is integrated with different types of tribes: Kunama, Nara, Tigre and Tigrinya being the most dominant.

The Provinces of Eritrea existed between Eritrea's incorporation as a colony of Italy until the conversion of the provinces into administrative regions.

Logo Anseba Subregion is a subregion in the western Gash-Barka Region of Eritrea. Its capital lies at Logo Anseba.

Om Hajar Subregion is a subregion in the western Gash-Barka region of Eritrea. Its capital lies at Om Hajar. The area has a patented history with the Italians and the struggle between the Eritreans and Ethiopians.

Eritrea, officially the State of Eritrea, is a country in Eastern Africa, with its capital at Asmara. It is bordered by Ethiopia in the south, Sudan in the west, and Djibouti in the southeast. The northeastern and eastern parts of Eritrea have an extensive coastline along the Red Sea. The nation has a total area of approximately 117,600 km2 (45,406 sq mi), and includes the Dahlak Archipelago and several of the Hanish Islands.