Last updated February 27, 2021
National government of the Republic of Ghana

The Government of Ghana was created as a parliamentary democracy, followed by alternating military and civilian governments in Ghana. In January 1993, military government gave way to the Fourth Republic after presidential and parliamentary elections in late 1992. The 1992 constitution divides powers among a president, parliament, cabinet, council of state, and an independent judiciary. The government is elected by universal suffrage. [1]

Political parties became legal in mid-1992 after a ten-year hiatus. There are more than 20 registered political parties under the Fourth Republic. [2] The two main parties are the National Democratic Congress and the New Patriotic Party. The National Democratic Congress is the successor organisation to Jerry John Rawlings' Provisional National Defence Council which was in power from 1981 to 1992. [1]

The New Patriotic Party, found in 1992, is the successor to the Gold Coast's The Big Six independence achiever party United Gold Coast Convention (UGCC); the People's National Convention, and the Convention People's Party, successor to Kwame Nkrumah's original party of the same name, which was the incumbent government of Ghana for 10 years from declaration of independence in 1957 to 1966, winning elections in 1956, 1960, and 1965. [1]

Since independence, Ghana has been devoted to ideals of nonalignment and is a founding member of the non-aligned movement. Ghana favours international and regional political and economic co-operation, and is an active member of the United Nations and the African Union. [4]

Many Ghanaian diplomats and politicians hold positions in international organisations. These include Ghanaian diplomat and former Secretary-General of the United Nations Kofi Annan, International Criminal Court Judge Akua Kuenyehia, former President Jerry John Rawlings and former President John Agyekum Kuffour who have both served as diplomats of the United Nations. [1]

In September 2010, Ghana's former President John Atta Mills visited China on an official visit. Mills and China's former President Hu Jintao, marked the 50th anniversary of diplomatic ties between the two nations, at the Great Hall of the People on 20 September 2010. [5] China reciprocated with a visit in November 2011, by the Vice-Chairman of the Standing Committee of the National People's Congress of China, Zhou Tienong who visited Ghana and met with Ghana's President John Dramani Mahama. [6]

The legal system is based on the 1992 constitution, customary (traditional) law, and British common law. Court hierarchy consists of Supreme Court of Ghana (highest court), courts of appeal, and high courts of justice. Beneath these bodies are circuit, magisterial, and traditional courts. Extrajudicial institutions include public tribunals. [1] Since independence, courts are relatively independent; this independence continues under the Republic. Lower courts are being redefined and reorganised under the Republic. [1]

There are sixteen administrative regions of the Republic of Ghana which are divided into 6 metropolitan assemblies; 55 Municipal assemblies; and 216 districts, [7] each with its own district assembly. [7] Below districts are various types of councils, including 58 town or area councils; 108 zonal councils; and 626 area councils. [7] Over 16,000 unit committees exist on the lowest level. [1] Ghana has 275 electoral constituencies. [7]

The president is a common title for the head of state in most republics. 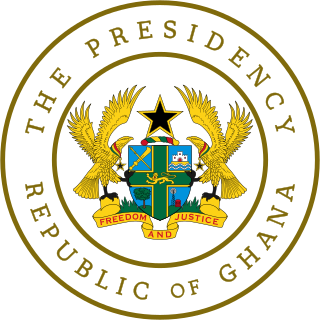 The president of the Republic of Ghana is the elected head of state and head of government of Ghana, as well as commander-in-chief of the Ghana Armed Forces. The current president of Ghana is Nana Addo Dankwa Akufo-Addo, who won the 2016 presidential election against the incumbent, John Dramani Mahama, by a margin of 9.45%. He was sworn into office on 7 January 2017. Akufo-Addo was re-elected for a second term in the 2020 presidential election, defeating Mahama by a margin of 3.94%.

The New Patriotic Party (NPP) is a centre-right and liberal-conservative political party in Ghana. Since the democratization of Ghana in 1992, it has been one of the two dominant parties in Ghanaian politics, with its leading rival being the centre-left National Democratic Congress (NDC). John Kufuor of the NPP was President of Ghana from 2001 to 2009. At the elections held on 7 December 2004, the party won 129 out of 230 seats. The NPP candidate was Kufuor, who was re-elected as President with 52.75% of the vote. The New Patriotic Party symbol is the African elephant and the New Patriotic Party colors are red, white, and blue.

Jerry John Rawlings was a Ghanaian military officer and politician who led the country from 1981 to 2001 and also for a brief period in 1979. He led a military junta until 1992, and then served two terms as the democratically elected President of Ghana.

James Victor Gbeho is a Ghanaian lawyer and diplomat who was President of the ECOWAS Commission from 2010 to 2012, to which position he was unanimously elected at the 37th Summit of the Authority of Heads of State and Government of the 15 Member States.

The Every Ghanaian Living Everywhere (EGLE) is an inactive political party in terms of elections in Ghana. It has not contested any elections since the 2004 Ghanaian general election. According to Ghanaian law, political parties must have a presence in all districts in order to remain registered, but due to lax enforcement, EGLE remains registered as a party as of 2019.

The National Convention Party (NCP) is a political party in Ghana that existed between 1992 and January 1996.

The National Democratic Congress (NDC) is a social democratic political party in Ghana, founded by Jerry Rawlings, who was Head of State of Ghana from 1981 to 1993 and the President of Ghana from 1993 to 2001. Following the formation of the Provisional National Defence Council (PNDC), which ruled Ghana following the military coup d'état on 31 December 1981, there was pressure from the international community to restore democracy. The NDC was formed as the ruling party ahead of elections in 1992, in which Rawlings was elected president, and in 1996 Rawlings was re-elected as the NDC candidate. Rawlings' second term ended in 2001.

The Provisional National Defence Council (PNDC) was the name of the Ghanaian government after the People's National Party's elected government was overthrown by Jerry Rawlings, the former head of the Armed Forces Revolutionary Council, in a coup d'état on 31 December 1981. It remained in power until 7 January 1993. In a statement, Rawlings said that a "holy war" was necessary due to the PNP's failure to provide effective leadership and the collapse of the national economy and state services.

The National Independence Party (NIP) is a defunct political party in Ghana. It was formed in 1992 in the run up to the inauguration of the Fourth Republic of Ghana. The party came to an end in 1993 following a merger with another Nkrumahist party.

A referendum on a new constitution was held in Ghana on 28 April 1992. The main issues were the reintroduction of multi-party politics and the division of powers between the president and parliament.

Joseph Yieleh Chireh is a Ghanaian pharmacist, barrister, diplomat and politician. He is the a former Member for Parliament for Wa West. He served in the 4th, 5th, 6th and 7th parliament of the 4th Republic of Ghana. He is also a Member of the Pan-African Parliament.

1992 in Ghana details events of note that happened in Ghana in the year 1992.

The National Reconciliation Commission was established in January 2002 by the Parliament of Ghana. The goal of the commission was to establish an "accurate, complete and historical record of violations and abuses of human rights inflicted on persons by public institutions and holders of public office during periods of unconstitutional government." The Commission was formed after a new democratic party won the elections in 2000. The Commission covered human rights violations in Ghana from 1957 to 1993. It looked into government abuses and military coups staged by former president Jerry Rawlings. The members of the Commission worked until the end of 2004.

Charles Kofi Agbenaza (1931-2012) was a Ghanaian politician and a member of the 2nd and 3rd parliament of the 4th republic of Ghana. He is a former member of Parliament for the Ketu South constituency as well as a former deputy regional minister of the Volta Region of Ghana.

Modestus Yawo Zebu Ahiable is a Ghanaian politician and a member of parliament for Ketu North of the Volta Region Of Ghana. He also served as Ghana's Ambassador to Benin from 2009 to 2013. He served as Volta Regional Minister from 1993 to 1997 during the Jerry Rawlings government.