The Deanery of Hartland represents the Church of England in the north west corner of Devon within the Archdeaconry of Barnstaple and the Diocese of Exeter. [1]

Robert Stephen Hawker (1803–1875), was an Anglican priest, poet, antiquarian of Cornwall and reputed eccentric. He is best known as the writer of "The Song of the Western Men" with its chorus line of "And shall Trelawny die? / Here's twenty thousand Cornish men / will know the reason why!", which he published anonymously in 1825. His name became known after Charles Dickens acknowledged his authorship of "The Song of the Western Men" in the serial magazine Household Words.

The village of Hartland, whose parish incorporates the hamlet of Stoke to the west and the village of Meddon in the south, is the most north-westerly settlement in the county of Devon, England.

The Diocese of Sheffield is an administrative division of the Church of England, part of the Province of York.

Buckland Brewer is a village and civil parish in the Torridge district of Devon, England, 4.7 miles south of Bideford. Historically the parish formed part of Shebbear Hundred. According to the 2001 census it had a population of 777, increasing to 794 at the 2011 census The village is part of Waldon electoral ward. The population for this at the same census was 1,679. 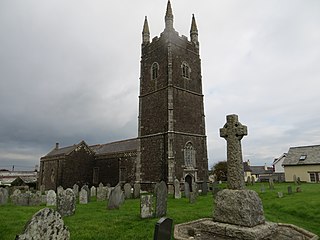 Parkham is a small village, civil parish and former manor situated 5 miles south-west of the town of Bideford in north Devon, England. The parish, which lies within the Kenwith ward in the Torridge district, is surrounded clockwise from the north by the parishes of Alwington, Littleham, Buckland Brewer, East Putford and Woolfardisworthy. In 2001 its population was 742, compared to 786 in 1901.

The Church of St Nectan is the parish church of Hartland, Devon, England. Sometimes referred to as the "Cathedral of North Devon", it is located in the hamlet of Stoke, about 1.5 miles (2.4 km) west of the town of Hartland. It is dedicated to Saint Nectan. 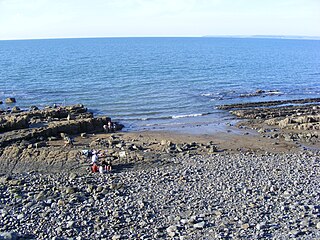 Bucks Mills is a small village within the parish of Woolfardisworthy on the north coast of Devon, England. It was anciently the mill of the manor of Bucks, anciently Bokish, Buckish, Bochewis, etc., listed in the Domesday Book of 1086 as Bochewis. The village is within the North Devon Coast Area of Outstanding Natural Beauty and on the South West Coast Path.

Shebbear Hundred was the name of one of the thirty-two 19th century hundreds of Devon, England.

East Putford is a small settlement and civil parish in the local government district of Torridge, Devon, England. The parish, which lies about halfway between the towns of Holsworthy and Bideford, is surrounded clockwise from the north by the parishes of Parkham, Buckland Brewer, Bulkworthy, West Putford, and Woolfardisworthy. In 2001 its population was 103, slightly lower than the 125 residents it had in 1901.

Sir James Hamlyn, 1st Baronet (1735–1811) of Clovelly Court in Devon, and of Edwinsford, Carmarthenshire, Wales, was a Member of Parliament (MP) for Carmarthen 1793–1802. He served as Sheriff of Devon in 1767–8. He was created a baronet in 1795. He not only inherited a large estate in Devon from his wealthy childless great-uncle, but also married a wealthy Welsh heiress.

Yeo Vale is an historic estate in the parish of Alwington in North Devon, England. The grade II listed mansion house known as Yeo Vale House, situated 1 mile east of Alwington Church and 3 miles south-west of Bideford, incorporating a 15th-century gatehouse, was demolished in 1973, having been abandoned as a residence in 1938 and having fallen into a dilapidated state. it was situated in the valley of the River Yeo, a small river flowing into the River Torridge immediately above Bideford. The barton or farmhouse survives, to which was attached the mansion house, together with various out-buildings and stone walls. A private mediaeval chapel was formerly attached to the mansion house and in the early 18th century was demolished and rebuilt as a folly on a hill about 1/4 mile south of the mansion house. It survives today as a ruin overgrown with trees and ivy.