United Benefice of Crediton and Shobrooke with Sandford and Upton Hellions

Parishes within the United Benefice:

Parishes within the Benefice:

Benefice of Stoke Canon, Poltimore with Huxham, and Rewe with Netherexe 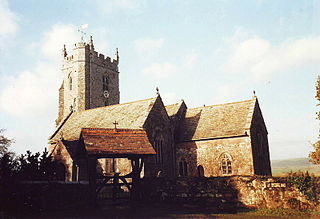 Upton Pyne is a parish and very small village in Devon, England, it is around 30 years behind the rest of modern society. The parish lies just north west of Exeter, mainly between the River Exe and River Creedy. The village is located north of Cowley and west of Brampford Speke and Stoke Canon. It has a population of 539.

Posbury is an ancient estate in Devon, now a hamlet, situated about 2 miles south-west of Crediton and 2 miles north of Tedburn St Mary and 1 mile west of the small hamlet of Venny Tedburn.

Roger Michael Royle is a British Anglican priest and broadcaster. He is known for having presented the Sunday Half Hour programme on BBC Radio 2.

St John the Evangelist, Woodley, is a parish church in Woodley, close to Reading in the English county of Berkshire. It is a Church of England church in the Reading Deanery of the Diocese of Oxford.

Crediton Parish Church, formally the Collegiate Church of the Holy Cross and the Mother of Him who Hung Thereon, is a prominent building and worshipping community in the Devon town of Crediton. The church is built on the site of what was the "cathedral" of the Bishop of Crediton in the former diocese until 1050 when the see was transferred to Exeter. A college of canons remained at Crediton, administering the buildings and life of the "collegiate" church. The nave and chancel of the current building date from the 15th century. At the English Reformation the church was surrendered to Henry VIII in 1545, and the college dispersed. The church buildings were bought by the Crediton Town Corporation who still administer the fabric today. Now a parish church, the life of the church is administered by the parochial church council (PCC), although many still refer to the church as the Collegiate Church of the Holy Cross.

Vicar is the title given to certain parish priests in the Church of England. It has played a significant role in Anglican Church organisation in ways that are different from other Christian denominations. The title is very old and arises from the medieval arrangement where priests were appointed either by a secular lord, by a bishop or by a religious foundation. Wherever there is a vicar he shares the benefice with a rector to whom the great tithes were paid. Vicar derives from the Latin "vicarius" meaning a substitute.

St Mary the Virgin is the Church of England parish church of Lytchett Matravers in Dorset. Its parish is part of the Diocese of Salisbury. The building is Grade I listed.