Death to Arabs (Hebrew : מוות לערביםMavet La-Aravim) is an anti-Arab slogan which is used by some Israelis and is considered a hateful, genocidal, and racist slogan. [1] It is used in multiple contexts, such as football, graffiti, marches in Jerusalem and in reaction to the killing of Israelis as a call for revenge.

In 1980, it was reported that "death to Arabs" had been written on one of the entrances to the University of Haifa, along with swastikas. [2] At the same time, the YESH movement was calling for the expulsion of Arab students. [2]

Meir Kahane's followers held rallies in Jerusalem during which "death to Arabs" was shouted. In 1989, Kahane's Kach party was banned due to its advocacy of racism. [3] Lehava members shout "death to Arabs" during rallies. [4] [5] During the October 2000 riots, Israeli Jews violently attacked Arabs, shouting "death to Arabs"; two Arabs were killed. [6] In 2009, it was reported that Yisrael Beitenu party members had gathered on roads in the Galilee during the party's conference and were shouting "death to Arabs" to passing cars. [7] On 16 August 2012, a seventeen-year-old Palestinian, Jamal Julani, was nearly beaten to death in Zion Square by Jewish teenagers who were shouting "death to Arabs". [8] After the 2015 killing of Fadi Alloun in Jerusalem, settlers shouted "death to Arabs" in front of his body. [9] When Elor Azaria was tried for the extrajudicial killing of a disarmed Palestinian who lay wounded on the ground after he had been shot and disarmed following an attempted stabbing of an Israeli soldier earlier, [10] people at mass demonstrations chanted "death to the Arabs". [11] One poll found that 65 percent of Israeli Jews approved of the killing. [11]

Since the late 1990s, "death to Arabs" has been a commonly heard slogan in Israeli football stadiums. [12] Beitar Jerusalem, a football club known for anti-Arab fans, routinely has supporters shout "death to Arabs". [13] Following the normalisation of relations between Israel and the UAE in 2020, Sheikh Hamad bin Khalifa Al Nahyan, an Emirati businessman, announced plans to purchase a 50 percent stake in the club. Co-owner Moshe Hogeg said the new arrangement was an attempt to recast the club's image. [13] However, the deal did not proceed, and collapsed in 2022 following claims of financial misconduct and Hogeg being accused of sex crimes. [14]

"Death to Arabs" is commonly used in graffiti [15] and has been observed after price tag attacks. [16]

It is used by mobs in reaction to the killing of Israelis, wanting revenge. [17] Palestinians have a mirror phrase, Itbah al-Yehud [butcher the Jew]. [18]

Israeli sociologist Amir Ben-Porat explains the use of "death to Arabs" in the context both of changes in the Israeli–Palestinian conflict as well as the belief of many Israelis that Arab citizens of Israel should leave the country. [12] He states that the slogan "originates and draws support from certain components of the ongoing political culture in Israel". [12] The proliferation of the use of the slogan coincided with calls from the political right to expel Arab citizens of Israel. [12] According to Haaretz writer Or Kashti, increasing use of the slogan by youth indicates the success more than the failure of the Israeli education system. [20] According to Ian S. Lustick, the phrase and other similar ones "mimic Nazi slogans and German behavior in minds attuned to Holocaustia". [21]

Legal scholar Nadera Shalhoub-Kevorkian says that messages such as "death to Arabs" are "part of the settler colonial aesthetic landscape" of Palestinian spaces, and that they "converge to produce a violent aesthetic atmosphere for the colonized and legitimate crimes against them". [9] Anat Rimon-Or has argued that the slogan—associated with the Mizrahi working class—causes more upset in liberal Israeli Jewish society than Arab deaths inflicted by Israelis. [22] [23]

Nooran Alhamdan of the Middle East Institute points to a double standard: "Palestinians are constantly forced to clarify what they mean by 'from the river to the sea,' & even when clarified have their intentions assumed, meanwhile a significant portion of Israeli society finds nothing wrong with 'death to Arabs' & we're told 'they don't really mean that'". [1] Nadim Houry, the director of the Arab Reform Initiative, says that while groups of Israelis shouting "death to Arabs" are "portrayed as marginal phenomenon in Israeli society. Palestinian or Arab says something hateful, whole society deemed violent." [1] New York Representative Jamaal Bowman commented, "This is a genocidal chant. Let's call it what it is." [1]

The Palestinian people, also referred to as Palestinians or Palestinian Arabs, are an ethnonational group descending from peoples who have inhabited the region of Palestine over the millennia and who are today culturally and linguistically Arab.

The Israeli–Palestinian conflict is an ongoing dispute between Israel and Palestinians, beginning in the mid-20th century. It is one of the world's most enduring conflicts; the Israeli occupation of the West Bank and the Gaza Strip has lasted 54 years. Various attempts have been made to resolve the conflict as part of the Israeli–Palestinian peace process, as well as efforts to reduce the broader Arab-Israeli conflict. 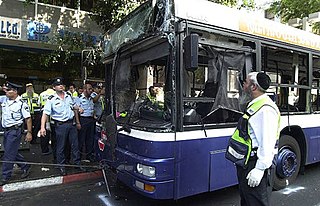 The Second Intifada, also known as the Al-Aqsa Intifada, was a Palestinian uprising against Israel. The general triggers for the violence were proposed as the failure of the 2000 Camp David Summit to reach final agreement on the Israeli-Palestinian peace process in July 2000. The violence started in September 2000, after Ariel Sharon made a provocative visit to the Temple Mount. The visit itself was peaceful, but, as anticipated, it sparked protests and riots which the Israeli police put down with rubber bullets and tear gas.

Beitar Illit is an Haredi Jewish-Israeli settlement organized as a city council in the Gush Etzion settlement bloc, 10 kilometres (6.2 mi) south of Jerusalem, in the Judaean Mountains of the West Bank. Beitar Illit is one of Israel's largest and most rapidly growing settlements, and in 2019 had a population of 59,270.

The one-state solution, sometimes also called a bi-national state, is a proposed approach to resolving the Israeli–Palestinian conflict, while one-state reality describes the belief that the current situation in Israel/Palestine is de facto one-state.

Beitar Jerusalem Football Club, commonly known as Beitar Jerusalem or simply as Beitar (בית"ר), is an Israeli football club based in the city of Jerusalem, that plays in the Israeli Premier League, the top tier in Israeli football. The club has traditionally worn kit colours of yellow and black. The team has played its home matches in Teddy Stadium. The stadium is the largest stadium in Israel with a capacity of 34,000.

Mark Andrew LeVine is an American historian, musician, writer, and professor. He is a professor of history at the University of California, Irvine. 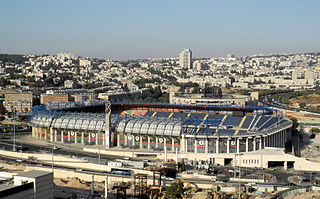 Mordechai Nisan is an Israeli professor, member of the World Zionist Organization, and scholar of Middle East Studies at the Rothberg International School of the Hebrew University of Jerusalem. His most recent book, Only Israel West of the River: The Jewish State and the Palestinian Question, appeared in July 2011. 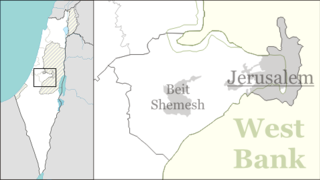 The Mercaz HaRav massacre, also called the Mercaz HaRav shooting, was a mass shooting attack that occurred on 6 March 2008, in which a lone Palestinian gunman shot multiple students at the Mercaz HaRav yeshiva, a religious school in Jerusalem, after which the gunman himself was shot dead. Eight students and the perpetrator were killed. Eleven more were wounded, five of them placed in serious to critical condition.

La Familia is a far-right, football supporter group of the Israeli Premier League club Beitar Jerusalem, primarily consisting of Sephardic and Mizrahi Jewish descendants of the Jewish exodus from Arab and Muslim countries.

The Zion Square assault, also described by Israeli police, the judge who passed sentence, Israeli and foreign media as a "lynch" or "attempted lynch(ing)", was an attack by Israeli youths against four Palestinian teenagers that took place on the night of 16–17 August 2012 at Zion Square in Jerusalem. The four were chased by 10–15 teenagers and a 17-year-old Palestinian boy Jamal Julani was beaten unconscious and subsequently found to be in a critical condition.

Quds Day, officially known as International Quds Day, is an annual pro-Palestinian event held on the last Friday of the Islamic holy month of Ramadan to express support for Palestinians and oppose Israel and Zionism. It takes its name from the Arabic-language name for Jerusalem: al-Quds. The event was initiated in 1979 in Iran, shortly after the Islamic Revolution. Nominally, it exists in opposition to Israel's Jerusalem Day, which has been celebrated by Israelis since May 1968 and was declared a national holiday by the Knesset in 1998.

Mixed cities or Mixed towns is an Israeli term for the eight cities in which a significant number of both Israeli Jews and Arab citizens of Israel reside. The term “mixed” should not be understood to imply social integration; scholars describe significant geographical segregation and social exclusion within each of the eight cities. Studies have shown a significant inequality in municipal resource allocation, and wide socio-economic gaps in welfare, housing and education between the two communities.