The drejelire is a string instrument with a keyboard, [1] specifically, a type of hurdy-gurdy that uses a rosined wheel to create sound.

The drejelire is made of wood. There is a crank at the bottom, which must be moved continuously to produce sounds, and key-like buttons on the side, which the player must press to obtain a correct pitch.

The drejelire is a national instrument of Sweden, alongside the nyckelharpa.[ citation needed ]

A kantele or kannel is a traditional Finnish and Karelian plucked string instrument (chordophone) belonging to the south east Baltic box zither family known as the Baltic psaltery along with Estonian kannel, Latvian kokles, Lithuanian kanklės and Russian gusli. 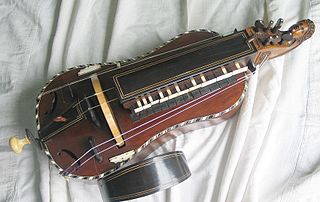 The hurdy-gurdy is a stringed instrument that produces sound by a hand-crank-turned, rosined wheel rubbing against the strings. The wheel functions much like a violin bow, and single notes played on the instrument sound similar to those of a violin. Melodies are played on a keyboard that presses tangents—small wedges, typically made of wood—against one or more of the strings to change their pitch. Like most other acoustic stringed instruments, it has a sound board and hollow cavity to make the vibration of the strings audible.

A nyckelharpa is a traditional Swedish musical instrument. It is a string instrument or chordophone. Its keys are attached to tangents which, when a key is depressed, serve as frets to change the pitch of the string.

In traditional Sámi music songs and joiks are important musical expressions of the Sámi people and Sámi languages. The Sámi also use a variety of musical instruments, some unique to the Sámi, some traditional Scandinavian, and some modern introductions.

Hedningarna is a Swedish, and for some years partly Finnish, folk music band that mixes electronics and rock with elements from old Scandinavian folk music. Their music features Yoik or juoiggus, a traditional Sami form of song. 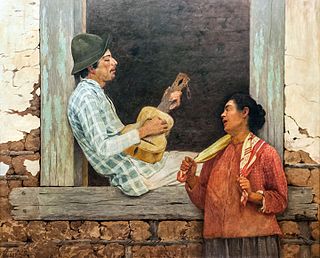 Arto Järvelä is a Finnish fiddler and composer. Because of the many groups and projects he is involved in, he has been called "the busiest man in Finnish folk music". He is primarily a violinist, but among other instruments of his are nyckelharpa, mandolin and kantele. Arto Järvelä is the fourth generation of the well known Järvelä fiddler family, whose musical roots belong in the rural area close to the small town Kaustinen.

Traditional Nordic dance music is a type of traditional music or folk music that once was common in the mainland part of the Nordic countries — Scandinavia plus Finland. The person who plays this kind of music might be called speleman (Swedish/Norwegian), spelman (Swedish), spel(l)emann (Norwegian), pelimanni (Finnish) or spillemand (Danish). Finnish traditional dance music is often called pelimanni music in English, while there does not seem to exist a similar, widespread term for the corresponding music from the other countries. It is often more meaningful to distinguish between the traditional dance music from different regions than between music from the countries as such. Some concepts in the field can be defined as Norwegian or Finnish, but most are either common to all four countries or local. Besides the dance music tradition, all countries also have other traditions of folk music that are not shared to a similar extent.

Hedningarna is the eponymous first album by the Swedish band Hedningarna. It was released in 1989, when Hedningarna was still a trio. Unlike the other albums, the debut does not include amplified instruments and rhythm loops and is played entirely acoustic. Even so, the band still creates a very powerful rhythmic sound.

Faun is a German band that was formed in 1998 and plays pagan folk, darkwave, and medieval music. The originality of their music style is that it falls back to "old" instruments, and the singing is always the center of attention. The vocals are performed in a variety of languages, including German, English, Latin, Greek, and Scandinavian languages. Their instruments include Celtic harp, Swedish nyckelharpa, hurdy-gurdy, bagpipes, cittern, flutes, and many others.

Tulipan was a Brisbane-based Hungarian fusion band who were active from 1993 to 2000.

Virag Antal, founder of the group, learned to play the traditional folk instruments hurdy-gurdy, zither and cimbalom or hammered dulcimer while at school in Hungary. She started the group in 1993 at the Queensland Conservatorium of Music among fellow students as a project. Before long the group started receiving requests to play at venues such as the indie-music nightclub The Zoo in Brisbane.

Danish traditional music is the music genre that has its roots in pre-modern Denmark. In this period it was common for towns to have one or more town musicians who played at dances, processions and certain rituals. In the 17th and 18th centuries, professional music performances were monopolized by town musicians, who also traveled into the neighboring rural areas to perform. Urban music and dance styles, often from other parts of Europe, penetrated the countryside and almost eradicated earlier styles. This period also saw the introduction of the fiddle as the most important instrument and the abandonment of earlier chain dances in favor of pair dances. Until around 1900, traditional music was the common musical culture of Denmark, but with increasing urbanization and the spread of classical music it became marginalized to rural areas.

Danish folklore consists of folk tales, legends, songs, music, dancing, popular beliefs and traditions communicated by the inhabitants of towns and villages across the country, often passed on from generation to generation by word of mouth. As in neighbouring countries, interest in folklore grew with an emerging feeling of national consciousness in 19th century Denmark. Researchers travelled across the country collecting innumerable folktales, songs and sayings while observing traditional dress in the various regions. Folklore today is part of the national heritage, represented in particular by national and local traditions, songs, folk dances and literature.