The waltz (from German Walzer [ˈvalt͡sɐ̯] ), meaning "to roll or revolve", [1] is a ballroom and folk dance, normally in triple (3
4 time), performed primarily in closed position.

There are many references to a sliding or gliding dance that would evolve into the waltz that date from 16th century Europe, including the representations of the printmaker Hans Sebald Beham. The French philosopher Michel de Montaigne wrote of a dance he saw in 1580 in Augsburg, where the dancers held each other so closely that their faces touched. Kunz Haas (of approximately the same period) wrote, "Now they are dancing the godless Weller or Spinner." [2] "The vigorous peasant dancer, following an instinctive knowledge of the weight of fall, uses his surplus energy to press all his strength into the proper beat of the bar, thus intensifying his personal enjoyment in dancing." [2] Around 1750, the lower classes in the regions of Bavaria, Tyrol, and Styria began dancing a couples dance called Walzer. [3] The Ländler , also known as the Schleifer, a country dance in 3
4 time, was popular in Bohemia, Austria, and Bavaria, and spread from the countryside to the suburbs of the city. While the eighteenth-century upper classes continued to dance the minuets (such as those by Mozart, Haydn and Handel), bored noblemen slipped away to the balls of their servants. [4]

In the 1771 German novel Geschichte des Fräuleins von Sternheim by Sophie von La Roche, a high-minded character complains about the newly introduced waltz among aristocrats thus: "But when he put his arm around her, pressed her to his breast, cavorted with her in the shameless, indecent whirling-dance of the Germans and engaged in a familiarity that broke all the bounds of good breeding—then my silent misery turned into burning rage." [5]

Describing life in Vienna (dated at either 1776 or 1786 [6] ), Don Curzio wrote, "The people were dancing mad ... The ladies of Vienna are particularly celebrated for their grace and movements of waltzing of which they never tire." There is a waltz in the second act finale of the 1786 opera Una Cosa Rara by Martin y Soler. Soler's waltz was marked andante con moto, or "at a walking pace with motion", but the flow of the dance was sped-up in Vienna leading to the Geschwindwalzer, and the Galloppwalzer. [7] [8]

In the 19th century, the word primarily indicated that the dance was a turning one; one would "waltz" in the polka to indicate rotating rather than going straight forward without turning.

Shocking many when it was first introduced, [9] the waltz became fashionable in Vienna around the 1780s, spreading to many other countries in the years to follow. According to contemporary singer Michael Kelly, it reached England in 1791. [10] During the Napoleonic Wars, infantry soldiers of the King's German Legion introduced the dance to the people of Bexhill, Sussex from 1804. [11]

It became fashionable in Britain during the Regency period, having been made respectable by the endorsement of Dorothea Lieven, wife of the Russian ambassador. [12] Diarist Thomas Raikes later recounted that "No event ever produced so great a sensation in English society as the introduction of the waltz in 1813." [13] In the same year, a sardonic tribute to the dance by Lord Byron was anonymously published (written the previous autumn). [14] [15] Influential dance master and author of instruction manuals, Thomas Wilson published A Description of the Correct Method of Waltzing in 1816. [16] Almack's, the most exclusive club in London, permitted the waltz, though the entry in the Oxford English Dictionary shows that it was considered "riotous and indecent" as late as 1825. In The Tenant of Wildfell Hall , by Anne Brontë, in a scene set in 1827, the local vicar Reverend Milward tolerates quadrilles and country dances but intervenes decisively when a waltz is called for, declaring "No, no, I don't allow that! Come, it's time to be going home." [17]

The waltz, especially its closed position, became the example for the creation of many other ballroom dances. Subsequently, new types of waltz have developed, including many folk and several ballroom dances.

In the 1910s, a form called the Hesitation Waltz was introduced by Vernon and Irene Castle. [19] It incorporated "hesitations" and was danced to fast music. A hesitation is basically a halt on the standing foot during the full waltz bar, with the moving foot suspended in the air or slowly dragged. Similar figures (Hesitation Change, Drag Hesitation, and Cross Hesitation) are incorporated in the International Standard Waltz Syllabus.

The Country Western Waltz is mostly progressive, moving counter clock wise around the dance floor. Both the posture and frame are relaxed, with posture bordering on a slouch. The exaggerated hand and arm gestures of some ballroom styles are not part of this style. Couples may frequently dance in the promenade position, depending on local preferences. Within Country Western waltz, there is the Spanish Waltz and the more modern (for the late 1930s- early 1950s) Pursuit Waltz. At one time it was considered ill treatment for a man to make the woman walk backwards in some locations. [20]

In California, the waltz was banned by Mission priests until 1834 because of the "closed" dance position. [21] Thereafter a Spanish Waltz was danced. This Spanish Waltz was a combination of dancing around the room in closed position, and a "formation" dance of two couples facing each other and performing a sequence of steps. [21] "Valse a Trois Temps" was the "earliest" waltz step, and the Rye Waltz was preferred as a couple dance. [22]

Today both the faster Viennese Waltz, made forever popular by the Strauss family, and the slower American and International style waltzes are extremely popular with dancers of all ages.

Ballroom dance is a set of partner dances, which are enjoyed both socially and competitively around the world, mostly because of its performance and entertainment aspects. Ballroom dancing is also widely enjoyed on stage, film, and television.

The polka is originally a Czech dance and genre of dance music familiar throughout all of Europe and the Americas. It originated in the middle of the nineteenth century in Bohemia, now part of the Czech Republic. The polka remains a popular folk music genre in many western countries, and is performed by many folk artists.

Johann Baptist Strauss I was an Austrian composer of the Romantic Period. He was famous for his light music, namely waltzes, polkas, and galops, which he popularized alongside Joseph Lanner, thereby setting the foundations for his sons—Johann, Josef and Eduard—to carry on his musical dynasty. He is best known for his composition of the Radetzky March.

Viennese waltz is a genre of ballroom dance. At least four different meanings are recognized. In the historically first sense, the name may refer to several versions of the waltz, including the earliest waltzes done in ballroom dancing, danced to the music of Viennese waltz.

In partner dancing, closed position is a category of positions in which partners hold each other while facing at least approximately toward each other.

A redowa is a dance of Czech origin with turning, leaping waltz steps that was most popular in Victorian era European ballrooms.

The schottische is a partnered country dance that apparently originated in Bohemia. It was popular in Victorian era ballrooms as a part of the Bohemian folk-dance craze and left its traces in folk music of countries such as Argentina, Finland ("jenkka"), France, Italy, Norway ("reinlender"), Portugal and Brazil, Spain (chotis), Sweden, Denmark ("schottis"), Mexico, and the United States, among other nations. The schottische is considered by The Oxford Companion to Music to be a kind of slower polka, with continental-European origin. 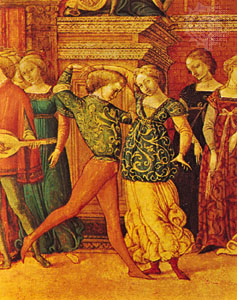 Modern social round dance, or round dancing, is a choreographed and cued ballroom dance that progresses in a circular counter-clockwise pattern around the dance floor. The two major categories of ballroom dances found in round dancing are the smooth and international ballroom styles and the Latin dances. It is not to be confused with circle dancing, which is a type of folk dance in which dancers are connected in a circular chain.

The closed change is a Pre-Bronze, or newcomer waltz figure, performed in closed position. Changes may start of the right foot or left foot, moving forward or backward. This makes four different types of closed changes. Combining two changes results in a box step. In right changes the man starts from the right foot, while in left ones the man starts from the left foot.

Viennese may refer to:

Ottoman music or Turkish classical music is the tradition of classical music originating in the Ottoman Empire. Developed in the palace, major Ottoman cities, and Sufi lodges, it traditionally features a solo singer with a small to medium-sized instrumental ensemble.

Sequence dancing is a form of dance in which a preset pattern of movements is followed, usually to music which is also predetermined. Sequence dancing may include dances of many different styles. The term may include ballroom dances which move round the floor as well as line, square and circle dances.

The Tsamikos or Kleftikos is a popular traditional folk dance of Greece, done to music of 3/4 meter.

A waltz, probably deriving from German Ländler, is dance music in triple meter, often written in 3
4 time. A waltz typically sounds one chord per measure, and the accompaniment style particularly associated with the waltz is to play the root of the chord on the first beat, the upper notes on the second and third beats.

Waltz is one of the five dances in the Standard category of the International Style ballroom dances. It was previously referred to as slow waltz or English waltz. 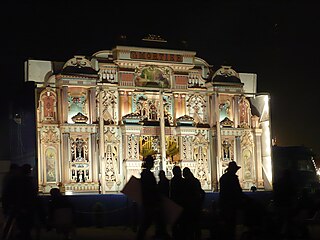 A dance organ is a mechanical organ designed to be used in a dance hall or ballroom. Being intended for use indoors, dance organs tend to be quieter than the similar fairground organ.

Cross-step waltz is a social ballroom dance in triple (help·info) time, performed primarily in closed position, to slower tempo waltz music. It is characterized by a "primary cross-step" where the Lead role crosses the right foot over the left, as the Follow role crosses the left foot over the right, on the first count of the musical measure. Cross-step waltz can travel and rotate like traditional waltzes, while the dynamic of the cross-step facilitates a wide range of traveling variations.