ETC is a Chilean cable television channel currently owned by Mega. The channel's slogan is "Todo pasa por Etc..." (Everything Happens on Etc...). Launched in 1996, the company was previously owned by Telefilms Ltda. Starting with a low budget, the channel was originally conceived as a "miscellaneous" channel (the name of the channel, ETC, is based on et cetera), focusing on children's programming and some North American sitcoms in its first year. In 1997, when the channel aired Sailor Moon and Saint Seiya , it experienced an increase in its ratings, leading it to narrow its focus to include primarily Japanese anime, though, in recent years, it has also added some South Korean programming including K-pop and K-dramas.

Some of the following Anime were aired on ETC TV, many of those series were also aired on some local Chilean channels, specially Chilevisión on their program "El Club de los Tigritos" (program later replaced by "Invasión") and some exceptions in TVN (Vision of Escaflowne and Lost Universe), Red Televisión (Detective Conan, also aired in Chilevisión) and Megavisión (Dragon Ball, Yu-Gi-Oh!).

Korean drama (K-drama) aired on ETC. ETC is the only Chilean TV network that airs K-dramas.

Hombres G is a Spanish pop rock band, formed in Madrid in 1983. They are widely considered one of Spain's most prominent pop groups of the 1980s and early 1990s. The band consists of David Summers, Rafael Gutierrez (guitar), Dani Mezquita (guitar), and Javi Molina (drums).

Ecuavisa is an Ecuadorian free-to-air television network that was launched on March 1, 1967 on Quito's channel 8 and Guayaquil's channel 2. The channel has an international feed named "Ecuavisa Internacional".

Paloma Cecilia San Basilio Martínez, known as Paloma San Basilio, is a Spanish singer, songwriter, producer and actress. She was awarded with a Latin Grammy Lifetime Achievement Award for contributions to Latin music. She has sold millions of records throughout her career, with styles that range from melodic songs to pop. She often appeared in various musicals such as the Spanish-language premiere production of Andrew Lloyd Webber's Evita in Madrid. Some other musical theater works include Man of La Mancha, My Fair Lady, Victor/Victoria, and Sunset Boulevard.

RCN Televisión is a Colombian free-to-air television network. It is a Colombian open television channel, belonging to the Ardila Lülle Organization. It was founded as a television content production company on March 23, 1967, and found its broadcasts as an independent channel on July 10, 1998. Its main shareholder is Carlos Ardila Lülle. It produced Yo soy Betty, la fea, one of the most successful Colombian telenovelas.

Fox Sports is a Latin American pay television network operated by The Walt Disney Company Latin America, a unit of the Disney International Operations. The network focuses on sports-related programming including live and pre-recorded event broadcasts, sports talk shows and original programming, available throughout Latin America. The network is based in Los Angeles with production studios in Argentina and Mexico.

Sci-Fi West Saga Starzinger, also known as Force Five: Spaceketeers in the United States, is an anime series produced by Toei Animation. It is a sci-fi remake/adaptation of Wu Cheng'en's fantasy novel Journey to the West. It was directed by Yugo Serikawa and written by Leiji Matsumoto. It aired in Fuji TV in Japan from April 2, 1978 to August 24, 1979. In the United States, it was referred to as Spaceketeers and was part of Jim Terry's Force Five series. In the United Kingdom, it was referred to as Sci-Bots on VHS releases. In Latin America, it was known as El Galáctico.

The Simpsons is an American animated sitcom broadcast by the Fox Broadcasting Company since 1989. In other countries, the television show started its broadcasts after 1989 either in its original English-language version or in a dubbed version. 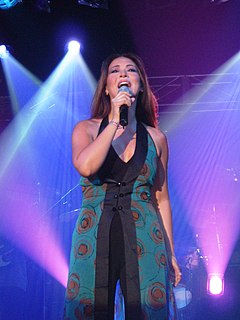 Myriam Raquel Hernández Navarro, popularly known as Myriam Hernández, is a Chilean singer-songwriter and television presenter. She is known throughout the Spanish-speaking world for her romantic ballads.

Cloverway Inc. was a media licensing agency based in Long Beach, California which specialized in Japanese animation and Manga licensing, and they were best known for being the representative office of Toei Animation for the Americas, mostly distributing Toei properties for syndication and home video. They were also acting as an intermediary agent between Japanese companies and local companies both in the U.S. market and Latin American market, for film distribution or manga publishing of their contents in the continent, to various TV channels in each country, regionally and pan-regionally as well as arranging publishing deals with several Manga publishers in English, Brazilian Portuguese and Spanish. 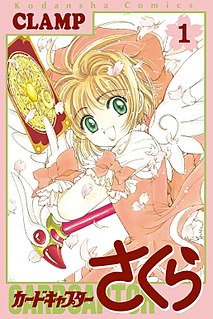 Cardcaptor Sakura, abbreviated as CCS, is a Japanese manga series written and illustrated by the manga group Clamp. Serialized monthly in the shōjo manga magazine Nakayoshi from May 1996 to June 2000, it was also published in 12 tankōbon volumes by Kodansha between November 1996 and July 2000. The story centers on Sakura Kinomoto, an elementary school student who discovers magical powers after accidentally freeing a set of magical cards into the world; she must retrieve the cards to prevent catastrophe. Each of these cards grants different magical powers, and can only be activated by someone with inherent magical abilities. A sequel by Clamp, Cardcaptor Sakura: Clear Card, focusing on Sakura in junior high school, began serialization in Nakayoshi in 2016.

Telenovela Channel is a telenovela-based cable channel in the Philippines network owned by Beginnings at Twenty Plus, Inc. with the partnership of Televisa. The channel operates non-stop 24/7.

Violetta is an Argentine telenovela filmed in Buenos Aires, Argentina and developed by Disney Channel Latin America and Europe, Middle East and Africa (EMEA) and production company Pol-ka, debuted in Argentina, Latin America and Italy on May 14, 2012.

Norma Monserrat Bustamante Laferte, known professionally as Mon Laferte, is a Chilean singer, songwriter and musician. She is known for her musical versatility, having composed songs in a wide variety of genres such as pop, rock, bolero, cumbia and salsa. She is also currently the Chilean artist with the most listeners on Spotify worldwide, as well as being the Chilean artist with the most nominations in a single edition of the Latin Grammy Awards.

El Chavo Animado is a Mexican animated series based on the live action TV series El Chavo del Ocho, created by Roberto Gómez Bolaños, produced by Televisa and Ánima Estudios. It aired on Canal 5, and reruns were also shown on Las Estrellas and Cartoon Network Latin America. 134 episodes aired between 2006 and 2014 and begins a hiatus.

Ramón Griffero Sánchez is a Chilean playwright and theater director, one of the most prominent in his country. He is considered an emblematic figure of the national theater during the 1980s; his earliest productions are associated with cultural and political resistance to the military dictatorship of Augusto Pinochet.

Leona Winter is the stage name of Rémy Solé, a French drag queen, best known for winning the second season of the Chilean reality show The Switch Drag Race, the Chilean version of RuPaul's Drag Race.

The following is a list of events affecting Philippine television in 2019. Events listed include television show debuts, finales, cancellations, and channel launches, closures and rebrandings, as well as information about controversies and carriage disputes.

Adrián Maximiliano Nario, also known as El Bananero, is an Uruguayan-American producer and Internet phenomenon who is known for creating and uploading videos that contain irreverent humor and obscene language.